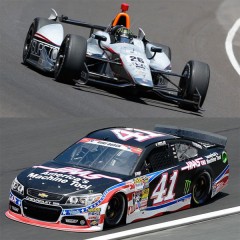 Seriously, it is that simple, that is what the man said. When asked why he was compelled to do the Double, Kurt Busch replied, “I’m a racer.” I’m sold, you’re a racer, but the Double is different territory.

While most of America was getting ready for a Sunday barbecue, Kurt Busch was in an Indy Car at the Indianapolis Speedway for 500 miles of racing as a rookie in the Indianapolis 500. That was to be the start of his day.

He would then hop a helicopter to a jet to a helicopter to Charlotte Motor Speedway, get in his NASCAR racing vehicle and start the second leg of his day, the Coca-Cola 600. That’s 1,100 miles of racing in two different racing cars against some of the best drivers in the world.

Busch started the first half of his Double off, with a 6th place finish at Indy, tying Tony Stewart for the best placed NASCAR driver doing the double. Then it was on to Charlotte, where, because he missed the divers meeting, he had to begin at the back of the field. Busch moved all the way up to crack the top 15, but this was not going to be his night. On lap 271, his engine blew and his night was over. 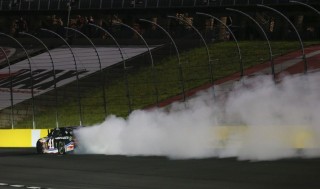 What was he thinking when the car started to let him down? “I think we just dropped a cylinder,” Busch radioed, then he lost another one. “It’s only a matter of time before she lets go,” he said. “This is (bleeping) lame.” He would later say “it was like the car just swallowed three cylinders at once.”

Busch attempted to race 1,100 miles, but he was let down by his car, bringing his total Sunday miles to 906.5. He finished only 193.5 miles of his goal, but the logistics to get him that far are pretty astounding. He had to qualify for both races and prepare for both races, practice for both races and I’m sure there was some food, drink and sleep in there somewhere as well. In the context of another sport, that’s like preparing to play a football and baseball game in the same day, back to back. The strategies are different.

Did he let all of the work, get in the way of having a good time? Nope.

“This is a true test of what your commitment level is on being a racer. There are so many practices back and forth, the travel, the logistics — the fun meter is pegged right now… I’m having a blast doing it. You just have to know it comes with a lot of hard work.’’ 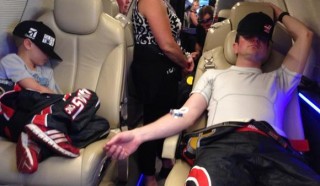 Kurt Busch may have fallen short of his goal, but he should be applauded for his attempt. Too many people are content to just go with the flow. Kurt Busch isn’t one of them. He challenged himself, as a racer and as a person. Ryan Hunter-Reay may have won the Indy 500 and Jimmie Johnson may have won the Coca-Cola 600, but Kurt Busch is the champion of the day for challenging himself.

How much of a true champion is he? After his race in Charlotte ended prematurely he said,“The mood down here, we’re not going to let it dampen things… There’s still wind in our sails, and we’ll still sail off into the sunset after today.”

That’s a champion and don’t forget he’s a racer. Too many people are caught up in the end result, when it’s the effort and the journey that are far more valuable. Kurt may not have finished the 1,100 miles he set out to complete, but he outlasted his NASCAR vehicle, it only went 406.5 of it’s scheduled 600 miles, whereas Kurt had run 906.5 miles and that’s something.

Sharing little joys offer great hope to others.
Even the greatest of whales is helpless in the middle of a desert.
To let another into your heart, first let yourself in.
More Fortunes >