From Star Wars Episode I to Episode VII: The Importance of Balance between Computer and Practical Effects 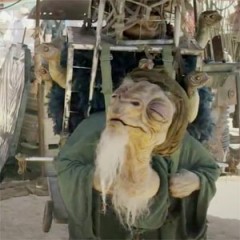 I am a fan of Star Wars, but not a fanatic. I grew up watching the original trilogy as it was intended and when the “updated” versions of the original trilogy hit store shelves, I was not educated enough, nor fanatical to have a real opinion. But now, as Episode VII is being filmed, it’s time to geek out for a bit.

First off, let’s talk about Star Wars: Episode I – The Phantom Menace. I remember standing in line, at about 5:00 p.m. for the midnight show, on a school night. I remember, in hindsight, that we “crossed the brands” of Coke™ and Pepsi™, because for Phantom Menace Pepsi™ was doing all of the Star Wars promotions, but there was a McDonald’s (which has an exclusive contract with Coke™) across the parking lot from the theater. So we stood in line, cases of Pepsi and Mountain Dew, with Star Wars characters emblazoned on the cans, eating Big Macs. 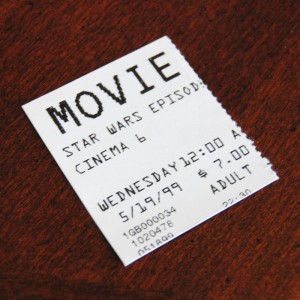 This was 1999, when the internet was still not the spoiler juggernaut it is today, so there was still a lot we didn’t know before heading in to see the film. The theater was packed, I mean, I was in line early enough to get a seat, but they added a few benches to the back of the theater and there were some people who were standing. This was an event.

When the lights darkened, the room was quiet, that is until the famous Star Wars scroll started and as the text reached the top of the screen, the theater was in full applause. I don’t know if this was just the theater I was in, or all of the theaters, but I gather from talking to others, that my theater’s applause, was not an isolated event.

Then we watched the movie, with all of the good and bad that has been discussed about the film since it’s release, it’s really hard to remember what my first impression was, so I’m not going to attempt to tell you. But in the 15 years since Episode I – The Phantom Menace, I have come to a few conclusions about the movie, but one ties nicely into Episode VII speculation.

The one conclusion that stands foremost in my mind about The Phantom Menace, is not about the movie as a whole, but it’s just about one character; Jar Jar Binks. I am very aware at how much the character was hated from the moment he first appeared on screen and through until this very today.

Jar Jar Binks is the Gungan equivalent of Rodney Dangerfield; No Respect!

I’ve seen the memes and the hate speech directed at the character, but I do not partake. I don’t think Jar Jar was the strongest character in the Star Wars Universe, but I don’t hate him. However, I believe there is one thing that would have made him, less hated, again, not loved, just less hated.

They shouldn’t have made him full CGI. If all of the other Gungans were computer generated, that’s fine, but Jar Jar Binks, as main character, should have been a puppet or animatronic. I fully believe, that as a puppet, a real live thing that interacted with the other actors, Jar Jar Binks, wouldn’t have been so hated. We have a certain reverence for puppets. Of this, certain I am. 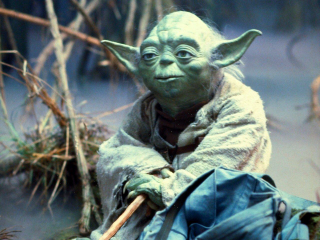 Yoda the Puppet in the Dagobah Swamp

I didn’t come to this conclusion overnight, it was an interesting thought that occurred to me. The friends I have spoken to about it, they all tend to agree, which is why I believe that we really do have a reverence for puppets, it’s something that we feel for them that CGI characters just can’t hold a candle to.

We came to have an emotional attachment, to our beloved pint-sized wisdom spewing Yoda and he was real; a real puppet that is. The practical effects in the original Star Wars trilogy are part of what we love about those movies.

How does this tie into Episode VII? Well, J.J. Abrams’s did a video from the set of Star Wars Episode VII for Star Wars: Force for Change, an initiative to benefit UNICEF, and behind him is a real live puppet, getting buzz on the internet, because, well, it’s the internet. Also, this could spell a return to practical effects in the Star Wars Universe, as opposed to a complete reliance on computer generated effects.

I’m not putting down, computer effects, they have their place, but as viewers, we seem far more receptive to practical effects. I’m not expecting Abrams’ to go completely practical effects and remove the computers from the equation, because that would be impractical, but the combination of practical and computer effects is a delicate balance, that should be balanced.

I applaud Abrams’ for going back to the roots of Star Wars with practical effects and I can’t wait to see more. Hold on to your seats, because until the movie is released, there will be a lot of talk about Episode VII, but I’ll be ignoring most of it. I’d like to see the movie, with as virgin a mind as I can, which means, I won’t be trolling the internet for Episode VII spoilers, and I’m thinking that that’s the way it should be. But that’s just one geek’s opinion.

To let another into your heart, first let yourself in.
Fame and fortune are coming your way.
Things are turning for the bright side.
More Fortunes >