A Magic the Gathering Halloween: The Top 10 Cards for Celebrating All Hallow’s Eve

Some are strange, and others are horrifying, ominous, or strange, but they all come from Old School Magic and they are all works of art in their own right. 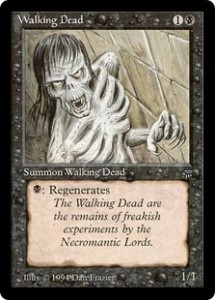 Yes, The Walking Dead comic and television show are well known, but this Walking Dead from Legends, predates both. Not all Zombies have beef on them, some are just walking skeletons, and within Magic there are plenty of skeletons. In fact, this card is a straight functional reprint of Drudge Skeletons, from Alpha.

Context aside, the Walking Dead that Dan Frazier created was as close to Digger the Skeleton made famous on HBO’s Tales from the Crypt as is possible. The flavor text of “The Walking Dead are the remains of freakish experiments by the Necromantic Lords,” is the icing on the cake baked by the incredible artwork. 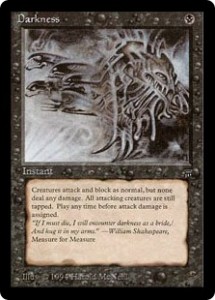 Almost everything that happens in horror movies happens in the dark, which is how Darkness from Legends makes it on the list. The art by Harold McNeill is detailed, yet it leaves something to the imagination, as well.

To me, I’m looking at escaped souls, but you may not see that at all. The flavor text is “If I must die, I will encounter darkness as a bride,/ And hug it in my arms.” from Measure for Measure by William Shakespeare.

Now, this may be a shock to some, but back in the early days of Magic, flavor text was pulled from many places. Some of it was made up and others, like this one, were pulled from classic texts. 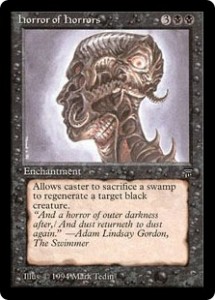 horror of horrors from Legends

8) horror of horrors from Legends

Sometimes the art of Magic can transcend the card, like horror of horrors from Legends does. The profile of this amalgamation of parts is beyond creepy.

It feels like it belongs as an illustration to a Clive Barker story. The flavor text takes it a step further with “And a horror of outer darkness after,/ And dust returneth to dust again.” from The Swimmer by Adam Lindsay Gordon.

This is one of the more graphic images, but it is that very detail that makes it stand out. I believe that if Tedin didn’t have this card picked up by MTG, it would be hanging on a wall as part of an exhibit in some museum. 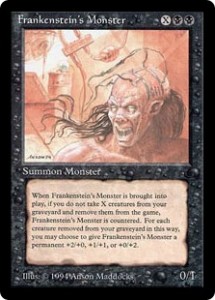 Frankenstein’s Monster from The Dark

7) Frankenstein’s Monster from The Dark

Halloween and Frankenstein go together like [insert your own simile here]. In fact, as the only Frankenstein card, Frankenstein’s Monster from The Dark was an obvious choice to make list. To go one further, it was a no-brainer… Pun intended.

Every Frankenstein’s monster is different, but most have some similarities that are present in Anson Maddocks’ card art.

They all have various parts sewn together with very obvious stitches. Maddocks has done this and it appears that the monster is still in Frankenstein’s workshop, still hooked up to the very machine that gave it life. 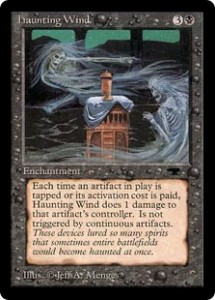 It is arguable whether the creatures are ghosts or skeletons in the artwork for haunting Wind from Antiquities, but it could be the wonderful third option of both.

The flavor text answers some of the question with, “These devices lured so many spirits that sometimes entire battlefields would become haunted at once.” These spirits dance a delicate, macabre waltz between skeleton and spirit thanks to their impressive skeletal quality and the wispiness that Jeff A. Menges applies to them.

The card name is haunting Wind and the flavor text talks about the device the spirits are surrounding, but does that mean the spirits came in with the wind? 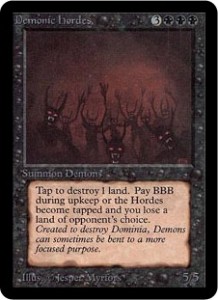 Nightmares are a part of the horror that is associated with Halloween and the artwork from Demonic hordes from Alpha, by Jesper Myrfors seems to come right out of a nightmare.

Of all the cards on this list, this is the only one with flavor text that refers to Dominiaria, which is the world in which Magic: The Gathering takes place. The flavor text is “Created to destroy Dominiaria, demons can sometimes be bent to a more focused purpose.”

That being said, this horde of demonic beings is truly terrifying. The red cloud coming at you with them in the darkness is the kind of thing that nightmares are made of. 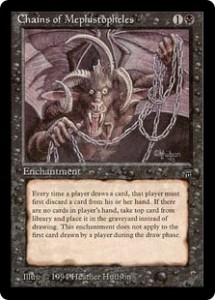 Chains of Mephistopheles from Legends

4) Chains of Mephistopheles from Legends

Mephistopheles is a demon from German Folklore that was a part of Goethe’s Faust. Chains of Mephistopheles from Legends would then be chains of demon.

The art by Heather Hudson takes this literally, with a demon holding chains, but the demon is quite the ugly beast. With three horns, a gaping maw with fangs, and creepy eyes, this winged creature is something to be reckoned with. And by reckoned with, I mean to be wrecked by.

This is the kind of demon that, when you see it in your nightmares, you want to wake up immediately even if it means you’ll be bathed in a pool of your own sweat. 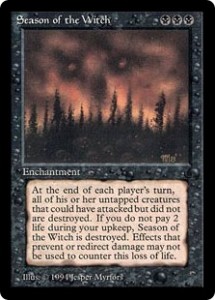 Season of the Witch from The Dark

3) Season of the Witch from The Dark

What would Halloween be without witches? I’m not sure, but the ominous artwork by Jesper Myrfors on Season of the Witch from The Dark seems to fit the holiday perfectly.

Not that hanging out in the woods, with two evil eyes lurking at you through the dense clouds in the sky seems like a good time. It doesn’t, but that kind of horror just fits with a late October sky.

The only thing that really is in question within the art of this card, is are the trees burning, or is that some kind of effigy in the sky and is it of good or evil intent? I guess that is all in the eye of the beholder. 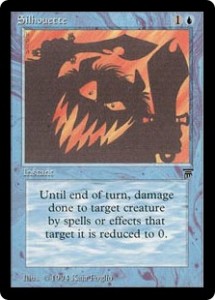 The only non-Black card to make the list is Silhouette from Legends, featuring the artwork of Kaja Foglio.

This menacing shadow holding two sharp weapons with crazy eyes and a terrifying grin seems to have come from some evil Halloween cartoon.

A silhouette is the image of something presented as a solid shape of a single color, but the something that this particular silhouette represents isn’t the kind of something I think I’d like to see. We all understand from watching cartoons like Scooby-Doo that shadows and silhouettes can be decieving, but I don’t get the feeling that this one would be. 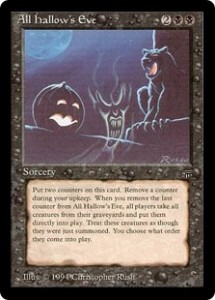 All Hallow’s Eve from Legends

1) All Hallow’s Eve from Legends

Last up in the list is the Halloween card of Magic: The Gathering; All Hallow’s Eve from Legends, with amazing art from Christopher Rush.

It has everything the holiday represents in one little scene: a carved pumpkin, a black cat (which looks more like a panther, but still qualifies), and an evil spirit lurking between them.

The apparent full moon and misty glow in the background make for a complete package, all wrapped up in the one card which best represents the season and holiday this list was created for.

So there you have it, 10 classic cards from back in the day; six from Legends, two from The Dark, one from Antiquities, and one from Alpha, created by nine different artists (Jesper Myrfors made the list twice). The artists on this list represent a who’s who of the original Magic artists and their talent is not without merit.

If you’re really feeling in Halloween spirit, ignore the sole Blue card on the list and try to use the other nine cards to create some kind of Halloween deck to really frighten your opponents!

Today it’s okay to make a few choices by going with your instincts.
A difference, to be a difference, must make a difference.
Let’s finish this up now, someone is waiting for you on that.
More Fortunes >