Tales of Symphonia: Dawn of a New World ~ Review 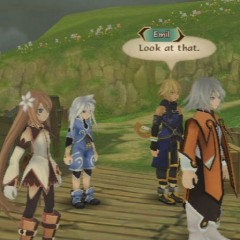 It’s been a while since I’ve posted. It’s also been a while since I started AND finished an RPG as well. The to are in direct correlation with each other as since my “Greatest Geek weekend in a while” I did spend the time needed to finish Tales of Symphonia: Dawn of a New World and it was very enjoyable. At times, it felt like I was in a choose your own adventure movie.

The game is exactly what you’d expect from a game in the Tales series. The battle engine is the same and the story is great. What surprised me the most, was how they wrote the story. The plot is so entwined with Tales of Symphonia, that if you didn’t play that game first, most of the back story would be lost on you.

The characters from the first one are all in there, the places are  the same, as well. It was a wonderful continuation. That kind of good continuation isn’t something you normally expect from a video game. The other great thing about it was the cut scenes. They aren’t all “press A” to continue. Some of them are just like watching a cartoon. 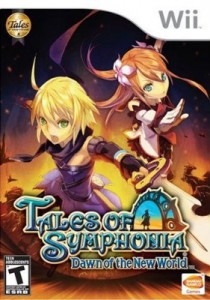 I don’t want to spoil anything, so I’ll just say that during the final battle, the in battle animation of the bad guys special moves were amazing. I was so in awe of the animation, I stopped playing momentarily, that is until I got hit and had to heal, so I didn’t die.

The other thing about this game in particular is the dialogue. It’s great! In my previous post about this game I listed some of my favorite lines. And I’ll be posting them all together soon, because they are worth sharing. There is a zen quality to some of them and others are just hilarious.

Namco, you’ve done it again. I was enthralled with the game and I’m glad you made it. However, according to the reception section on the game’s Wikipedia page, my review and feelings towards the game are not the whole story. Some people didn’t like the game at all and I just can’t imagine why, but to each their own.