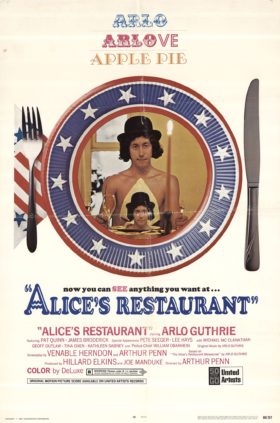 Tagline(s): Where the heads of all nations meet
Every Generation Has A Story To Tell.

Based On: Alice’s Restaurant by Arlo Guthrie

Declassified by Agent Palmer: The film “Alice’s Restaurant” is an avant-garde snapshot of 1960’s counter-culture

“Hi, howya doing? I’m Arlo Guthrie and you’ve probably listened to or heard about a thing called Alice’s Restaurant. Now as you know, Alice’s Restaurant is about some friends of mine, Alice and Ray, who live in a church in Stockbridge, Massachusetts, where Alice ran her restaurant. Alice’s Restaurant is not the name of the restaurant, is was the name of my song about the restaurant. And now it’s the name of a movie based on my song about ‘Alice’s Restaurant.’ It’s all about that beautiful Thanksgiving dinner which produced and incredible, amazing pile of garbage which we tried real hard to dump at the dump. And which we ended up dumping off the side of a road where we were caught red-handed by some local citizens and eventually confronted by none other than Officer Obie himself. It’s all about the subsequent full scale police investigation complete with five police officers, three police cars, one police dog, and 27 8×10 colored glossy photographs with a paragraph on the back of each one used as evidence at the subsequent trial which resulted in my conviction, a black mark on my record. Which eventually led me to my problems with the draft. So I’m inviting all of you to meet me and Alice and Ray and Officer Obie and all kinds of groovy people doing all kinds of groovy things that are all part of that Alice’s Restaurant Anti-Massacree Movement that you can join by digging this film or by singing this song, in four-part harmony, with feeling. You can get anything you want at Alice’s Restaurant…”

“I seem to have this habit of getting arrested…”

“Seems like schools have a habit of dropping out around me…”

“With the draft breathing in my face, I figured I’d get me some of that deferred preferred draft exempted U.S. Government inspected education.”

“Grace be to Alice for coming home to cook this feast. Grace be to us for being here to dig it, because we’re beautiful. Now we’re doin it. We got what we need. What more do we want? Pastures of plenty, come on dig in…”

“Sorta sets you adrift…. Let’s you know your life is going by… All of a sudden I feel in a hurry to find out what my thing’s going to be. Who and where…”

Alice: I guess maybe our beauty wasn’t coming through to him…
Ray: Maybe we haven’t been so beautiful lately…

Alice: I guess I’m the bitch of too many pups. Couldn’t take ’em all milkin’ me.

Whoever wants to reach a distant goal must take small steps.
A difference, to be a difference, must make a difference.
Sharing little joys offer great hope to others.
More Fortunes >