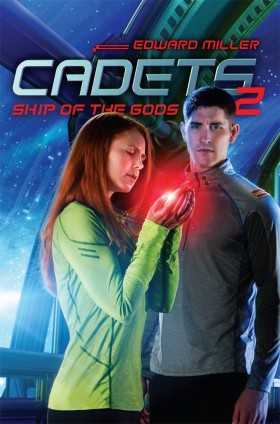 Cadets 2: Ship of the Gods

Tagline: With time running out, the fate of two worlds depends on finding a legendary weapon, hidden by ancient aliens.

Synopsis: Six months have passed since United Earth Defense Fleet (UEDF) cadets Ryan Thompson, Amanda Williamson, and their senior class saved earth from destruction at the hands of the Altarrans. It seems like yesterday that they learned startling truths about the strange invaders from Altarra, and undertook the adventure of a lifetime. As the cadets now prepare for graduation, Amanda is haunted by vivid nightmares of another alien race, this one much more deadly, and with a mission to annihilate all life within our galaxy. Worse, she’s having mysterious blackouts and apparent visits from an ancient entity, who warns that the Karang are coming. With the help of their former enemies, the Altarrans, Ryan, Amanda and the entire UEDF must hold off the Karang against all odds, while searching for a long-hidden, legendary weapon known as the Ship of the Gods, which may be the only slim hope for Earth’s survival.

Declassified by Agent Palmer: A Spoiler Free Review of Cadets: 2 Ship of the Gods by Edward Miller

“The evil ones have returned and are coming with the intention of annihilating both of our species.”

“We want nothing from you, my child. We are here to warn you, just as we promised many thousands of years ago. We knew the Karang would return one day. We hoped they had learned their lesson. Unfortunately, as has been true in the past and will always be, evil never changes. It appears that they are back. And their agenda has not changed.”

The universe could certainly be maddening.

“I wish, though it doesn’t seem to make any difference. No matter what we do or where we are, trouble always finds us.” – Amanda

Now he was realizing that he was very much his father’s son…and damn proud of it as well.

“It has been foretold that the Karang are fearless and fight with a reckless abandon. Also, there is the fact that they greatly outnumber us. I do not believe that they will break formation at all. IT is of my personal belief that due to their arrogance they will simply attempt to run through us. I can assure you that they do not fear us. And that is also their weakness. For one not to have any fear of one’s enemy is foolish, as overconfidence can lead to disaster. I do not know if we can defeat them with the number of ships we have. But if we can hold them off long enough for Amanda Williamson and Kyron to find The Ship of the Gods, our sacrifice shall be worth it.”

“The humans are most certainly a strange breed,” said Granthaxe. “Unlike us they have many different classes in their society. Some seem to be privileged and others seem to live in poverty. I do not understand their concepts and how some could be so above reproach and others live from hand to mouth. They have ones who would put their lives on the line to help others, even complete strangers, yet there are some who betray their own people. I find them most confusing.”
“Indeed,” replied the queen. “They are difficult to understand. There are times they seem careless and selfish. Then there will be times they show great compassion and perform selfless acts of bravery. I believe they have yet to reach their true destiny. They have promise, my son…”

“Luck is for those without strength and fortitude,” said Granthaxe.

Good commanders followed the rules. Great commanders knew when to break them.

Nothing in the world can take the place of persistence.
Fame and fortune are coming your way.
To let another into your heart, first let yourself in.
More Fortunes >