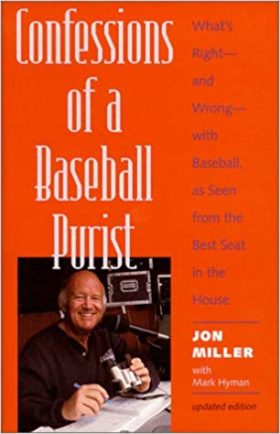 Confessions of a Baseball Purist

Tagline: What’s Right and Wrong with Baseball As Seen from the Best Seat in the House

Synopsis: True to the broadcaster’s art, Confessions of a Baseball Purist calls the game the way Jon Miller sees it: with wit, with style, and with absolute candor. For the baseball purist in all of us, Miller provides a rallying cry, some warm memories, and reasons to keep believing in the game we love.

Declassified by Agent Palmer: Historical with Editorial: Jon Miller’s Confessions of a Baseball Purist is a Home Run.

For us purists, there’s nothing better than a great baseball game between two true rivals. Whether they’re rivals for geographic reasons or historical ones, or maybe just some recent bad blood, those games where everyone cares just a little bit more give us the best of what baseball has to offer.

“Modern stars are healthier, bigger, and they receive better individual instruction.”
Oh, yes. That quote, which I’m totally agreeing with, was uttered by Cincinnati Reds general manager Gabe Paul . . . in 1956!

“The great trouble with baseball today is that most of the players are in the game for the money.”
You’ve probably said those words yourself. It’s a common lament about today’s game and today’s players. Except that this criticism was uttered by Ty Cobb–in 1925!

To me, it’s a remarkable coincidence that the best teams are always the ones from 20 years ago. Win the World Series tomorrow, you’re a footnote to history; win the World Series in 1965, and you’re knocking on the door to immortality.

Baseball is the best arguing game. If you’re passionate about baseball, you argue. It’s not even optional. Everything is a potential argument in baseball.

“The present crop of big leaguers does not think enough. He feels he has arrived. The result is less intelligent baseball and a bit of laziness.”
That was Hall of Famer Tris Speaker, in 1926.

In sports, athletes only get better. The Golden Age is now. Always.

In baseball, we’ve gotten into the habit of denigrating the game. Unintentionally. Unwittingly. Yet we do it.

In other businesses, employees and owners don’t knock the product. When you order a burger at McDonald’s, the server doesn’t whine about the runaway price of pickles.

Baseball is different. In baseball, knocking the product is a tradition. It happens every day, and it happens in ways that are subtle and, well, not so subtle.

Baseball forgets that fans are interested in one thing and one thing only: the game.

“If I were a fan, how would that sound?”
In baseball, that’s a question people should be asking five times a day. Maybe ten times a day. It isn’t being asked enough. From now on, management must be more aware of the messages it sends to fans. The same goes for players, too.

“I definitely believe slow, dull games are keeping people away from the parks.”
That sounds familiar, doesn’t it? It seems as if you hear something like that a couple of times every week. “The game today takes too damn long.”
But this quote was taken from The Sporting News in 1956. The man speaking was Cubs business manager Jim Gallagher, who was also a member of baseball’s rules committee. The quote was part of a front-page story forty-two years ago detailing ways that baseball could go about speeding up games. In fact, the American League had plans to institute a speed-up rule that year that would have limited each manager to one mound conference per pitcher per game.

The length of the game is not necessarily related to the quality of play–or your enjoyment of it.

“In my business, even one lose makes you a failure,” he once told me. “It’s real hard to get used to sixty-two loses being a great year.” But such is the nature of baseball, regardless of who the owner is. {Ed Williams Baltimore Orioles Owner}

A good baseball broadcaster should have fun and make the broadcast entertaining and informative. A good sense of humor is definitely an asset. But the first responsibility of any broadcaster is to the fans. That responsibility is to report what’s going on at the ballpark, vividly, cearly, and accurately. On radio, it’s about painting a picture of the action. On television, it’s about providing the proper information to complement the pictures.

Look at any list of great baseball broadcasters. Each has or had a unique style, a different way of making the broadcasts informative and entertaining. But despite the wide variation in styles, they all come back to the same fundamentals: They tell the truth, give a good, accurate picture of the game, and they earn credibility with the fans.

So now it’s springtime, and baseball draws us back again. No surprise there; baseball always draws us back. Baseball is good company. It’s everyday. It’s dependable. Baseball is like the friend you have for life. Baseball is a vacation from the real world, whenever you want it–fifteen minutes pouring over the box scores each morning provides a refreshing respite from the frantic pace of real life. A game on the radio, every day, whenever and wherever you want it–in the car, by the backyard barbecue, at the beach, on the night table beside your bed.

Nothing in the world can take the place of persistence.
Sharing little joys offer great hope to others.
The path of life shall lead upwards for you.
More Fortunes >