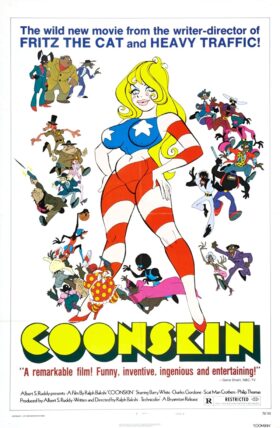 Tagline(s): BARRY WHITE and his men are bustin’ out to win! They’ll stop the man from calling them “Coonskin”
If you’ve been shot on, passed on, gassed on, pushed on or red, white and blued on … you’re ready to turn on to “Coonskin”
This is it Folks!
WARNING: “This film offends everybody!”

Synopsis: Rabbit, a country-born trickster, takes over the organized crime racket in Harlem, facing opposition from the institutionalized racism of the Mafia and corrupt police.

Declassified by Agent Palmer: Rotospective: Coonskin, Lessons in Race and Causes from the 1970’s to Today

Preacher: It’s them crackers shootin at us on the way in that’s got me worried
Samson: Shit… we’ll shoot back
Preacher: What am I gonna do, I ain’t got no gun!
Samson: Preacher, you just cuss and scream at ’em.
Preacher: What kind of sermon you want me to preach ’em.
Samson: The Blues

Man in Blue: Fuck you.
Man in Yellow: Alright, I’m gonna give some example: I heard that 350 white folks committed suicide by jumping off the Golden Gate Bridge. And out of the 350, there was two that was niggers.
Man in Blue: And one of them was pushed.

Brother Bear: Preacher, why don’t you shut up?
Preacher Fox: ‘Cause I have an electric mouth!

The path of life shall lead upwards for you.
Even a broken clock is right two times a day.
Courtesy is the password to safety.
More Fortunes >