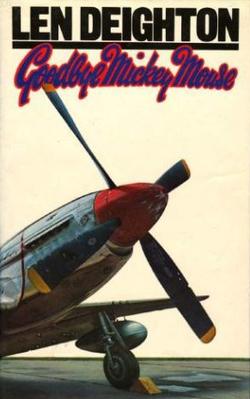 Synopsis: Set in Britain in early 1944 it tells the story of the 220th Fighter Group of the US Eighth Air Force in the lead up to the Allied invasion of Europe. The Group is based at the fictional Steeple Thaxted airfield in Norfolk.

And all men kill the thing they love,
By all let this be heard,
Some do it with a bitter look,
Some with a flattering word,
The coward does it with a kiss,
The brave man with a sword.
-Oscar Wilde, The Ballad of Reading Gaol

Mickey Mouse U.S. Military Slang.
Anything that is unnecessary or unimportant . (Named for the Walt Disney animated cartoon character, in allusion to its childish appeal, its simplicity, triviality, etc.)
—The Barnhart Dictionary of New English

These flyers who fought by night were pallid and withdrawn by comparison with the noisy suntanned extroverts which U.S. Army selection boards seemed to prefer as crews.

“You get headlines going to Berlin. No one wants to know about the flak at Hannover or the fighter defenses at Kassel. But go to Berlin and you’re a headline.” – MM

There’s so much to say when you’re falling in love, and so much to listen to. They wanted to tell each other everything they had ever said, thought, or done. Their worlds were in collision.

Vera stood in the doorway looking at her friend quizzically. “You never cry, do you? I can’t imagine you crying.”
“I’m not the crying type,” Victoria said. “I swear instead.”

“Naturally? I don’t know what an investment consultant does.”
“I don’t either,” Jamie admitted. “But I guess he tells people who need a million dollars where to get them cheaply.”

“Fundamentally, Duke,” said Colonel Dan with what he considered great patience, “everything in the universe is money and sex.”

Everything was the same, and yet everything had changed; he had changed. He’d been strapped tight into the narrow confines of a P-51, flown it across western Europe, and come back again–a thousand miles. He’d killed a man, come close to dying, and been more frightened than he’d ever dreamed possible. Of course everything was different; the boy who’d played bridge with the Coopers the other day would never return again. For better or for worse, he was a different man.

…as every father must love his child, and the son could not respond with equal love, for that is the fundamental and tragic truth of human biology. For it children did love their parents with the same consuming passion, they would never leave home, and the world would end.

Men were so slow to understand anything that was unspoken, and far too reliant upon things that were actually said.

He had no great love for the Americans: “overfed, overpaid, oversexed, and over here,” as the British kept saying.

The German turned, Farebrother eased the stick and held on to him, pressing himself forward against the harness with the insane feeling that he could actually increase his speed by leaning forward.

Who could see the bomber crews without admiring the phlegmatic determination which makes other kinds of courage seem no more than temporary lapses of judgement? They were the real heroes, the ones who came up here day after day as human targets for every weapon an ingenious, dedicated, and tenacious foe could use against them. So in life itself the true measure of courage is to fly on despite the tragedies of accident, sickness, or failure.

The path of life shall lead upwards for you.
Your moods signal a period of change.
You are interested in higher education, whether material or spiritual.
More Fortunes >