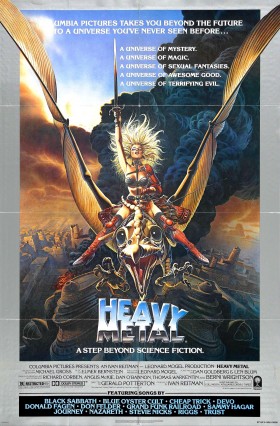 Synopsis: A glowing orb terrorizes a young girl with a collection of stories of dark fantasy, eroticism and horror.

Declassified by Agent Palmer: Outstanding art, music of ‘Heavy Metal’ captured lightning in a bottle in 1981

Loc-Nar: Do not try to escape, you are in my control. Look at me, I am the sum of all evils. Look carefully, my power infests all times, all galaxies, all dimensions. But many still seek me out; a green jewel they must possess. But see how I destroy their lives.

Loc-Nar: You’ve had your first lesson, young one. My evil corrupts the most innocent. I’ve chosen you because you possess powers you do not yet understand. look again. Look deep into me. In some worlds, I’m worshiped as God.

Zeke: Look, man, if there’s one thing I know, it’s how to drive while I’m stoned. It’s like you know your perspective’s fucked so you just let your hands work the controls as if you were straight.

Taarak the Defender: To defend: this is the pact. But when life loses its meaning and is taken for naught, then the pact is to avenge!

Narrator: And the spirit of time is transferred, across the universe, to a new defender and the power of evil is contained for another generation and a new Taarakian is born to protect the next.

Ard: If you refuse, you die; she dies… everybody dies!

Loc-Nar: Even when someone has the strength to discard me, my power is not diminished. Someone always finds me.

Harry Canyon: The U.N. Building. What a joke! They turned it into low rent housing. It’s a dump.

Desk Sergeant: Before you go any further, pal, I gotta tell ya it’s cash up front. A thousand bucks a day for a full investigation, another thou’ if the assailant is caught. Do you understand?

Narrator: A shadow shall fall over the universe, and evil will grow in its path, and death will come from the skies.

Stern: Take it easy Charlie. I’ve got an angle.

Loc-Nar: Very few escape my grasp. Even in death, my powers continue.

Edsel: The first Earth chick we see in 10 years and he has to make a play for her.

Lawyer: But the most we can hope for is to get you buried in secrecy so your grave don’t get violated!

Queen: Neverwhere is a troubled land. Your great strength has brought peace to my restless body. It can bring great peace to all the people of this land.

Loc-Nar: My stories are almost over. I have chosen you because you are the future who could destroy me. With your death, I break the chain for all time. Look into me, one final time. See my evil destroy your race. Then prepare to die.

Fame and fortune are coming your way.
Whoever wants to reach a distant goal must take small steps.
You are interested in higher education, whether material or spiritual.
More Fortunes >