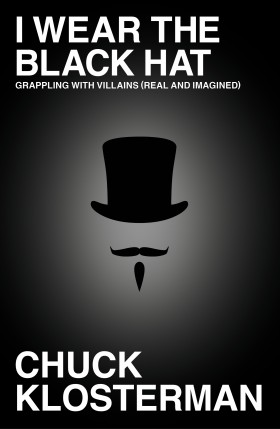 I Wear the Black Hat

Synopsis: Chuck Klosterman has walked into the darkness. As a boy, he related to the cultural figures who represented goodness—but as an adult, he found himself unconsciously aligning with their enemies. This was not because he necessarily liked what they were doing; it was because they were doing it on purpose (and they were doing it better). They wanted to be evil. And what, exactly, was that supposed to mean? When we classify someone as a bad person, what are we really saying (and why are we so obsessed with saying it)? How does the culture of deliberate malevolence operate?

In I Wear the Black Hat, Klosterman questions the modern understanding of villainy. What was so Machiavellian about Machiavelli? Why don’t we see Bernhard Goetz the same way we see Batman? Who is more worthy of our vitriol—Bill Clinton or Don Henley? What was O. J. Simpson’s second-worst decision? And why is Klosterman still haunted by some kid he knew for one week in 1985?

Masterfully blending cultural analysis with self-interrogation and imaginative hypotheticals, I Wear the Black Hat delivers perceptive observations on the complexity of the antihero (seemingly the only kind of hero America still creates). I Wear the Black Hat is a rare example of serious criticism that’s instantly accessible and really, really funny. Klosterman continues to be the only writer doing whatever it is he’s doing.

Declassified by Agent Palmer: I Suggest You Read I Wear the Black Hat: Grappling with Villains (Real & Imagined) by Chuck Klosterman

“I care about strangers when they’re abstractions, but I feel almost nothing when they are literally in front of me”

“This book is about the presentation of material, since the posture of that presentation–more than what is technically and literally expressed–dictates the meaning that is (eventually) contextualized by others.”

“So this, I suspect, is where we really begin: In any situation, the villain is the person who knows the most but cares the least.”

“But it’s not the intelligence. It’s the calculation.It’s someone who views life as a game where the rules are poorly written and designed for abuse.”

“[The reason behind everything always has to be something else entirely.]”

“My mind is not my own. And once that realization calcifies internally, there is no going back. Once you realize you can’t control how you feel, it’s impossible to believe any of your own opinions.”

“So often does it happen that we live our lives in chains, and we never even know there is no key.”

“There’s always this underlying message–that if we could only understand the inner con man–we would love him. But this is not something that’s true; it’s only something we believe.

As much as we like to pretend that narcissism is gross, it doesn’t function that way in society (particularly if the person projecting that narcissism has a sense of humor). It scans as charisma.

… pop’s truest aphorism: “To live outside the law, you must be honest.”

“…the level of villainy should mostly come done to motive…”

Why are the qualities we value in the unreal somehow verboten in reality?

The contradiction between what they think and how they feel does not pose a problem; as far as they can tell, no contradiction exists. That’s the matter–that’s the problem…

The central definition of “superficiality” is the act of caring about how something looks on the surface (as opposed to what it actually is).

Merit is always a factor in someone’s cultural memory, but rarely the main one.

If you act nice, you’re nice. That’s the whole equation.

Until proven otherwise, we just accept goodness at face value. But this is not how it works with badness.

This is weapon-grade nihilism: There were ony two meaningful elements within their entire worldview … And one could be totally eliminated without consequence.

Nothing twists and obscures day-to-day human existence as much as physical attraction.

The way people look is so central to how we live (and how we respond to interpersonal conflict) that we’ve managed to collectively underrate its importance.

A villain is the person who knows the most and cares the least.

(Somehow, the touchstone for how hackers behave is still based on Matthew Broderick’s performance in the 1983 film WarGames.)

He is, in many ways, the most depressing kind of villain: the kind we must agree with in order to stay competitive. The only other option is being trampled. (On Kim Dotcom)

It is journalism that attacks journalism, which is an extremely interesting topic to journalists. (On Julian Assange founder of WikiLeaks)

Nobody ever talks about building a time machine in order to go back and kill Judas.

“The one person I am on record for hating is the first baseball player on record for taking a public stand against anabolic steroids.” Klosterman on hating Rick Helling