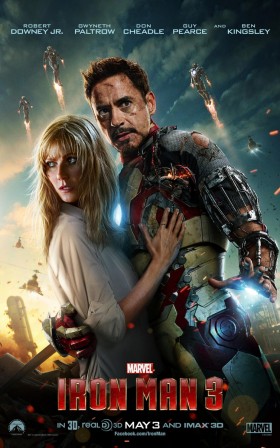 Tagline(s): Prepare for heavy metal!
Unleash the power behind the armor.
Even heroes fall.

Synopsis: When Tony Stark’s world is torn apart by a formidable terrorist called the Mandarin, he starts an odyssey of rebuilding and retribution.

Tony Stark: My armor was never a distraction or a hobby, it was a cocoon, and now I’m a changed man. You can take away my house, all my tricks and toys, but one thing you can’t take away – I am Iron Man.

Brandt: Is that all you’ve got? A cheap trick and a cheesy one-liner?
Tony Stark: Sweetheart, that could be the name of my autobiography.

Tony Stark: I’m Tony Stark. I build neat stuff, got a great girl, occasionally save the world. So why can’t I sleep?

Pepper Potts: Am I going to be okay?
Tony Stark: No. You’re in a relationship with me, nothing will ever be okay. But I had this twenty years ago when I was drunk, I can sort it out. I fix stuff.

Aldrich Killian: I know it’s a little over the top sometimes. It’s not entirely my fault; he has a tend… he’s… he’s a stage actor. They say his Lear was the toast of Croydon, wherever that is. Anyway, the point is, ever since that big dude with a hammer fell out of the sky, subtlety’s kinda had its day.

Aldrich Killian: The early bird gets the worm, but it’s the second mouse that gets the cheese.

Tony Stark: I miss you, Happy.
Happy Hogan: Yeah, I miss you, too. But the way it used to be. Now you’re off with the super-friends. I don’t know what’s going on with you, anymore. The world’s getting weird.

Jarvis: I seem to do quite well for a stretch, and then at the end of the sentence I say the wrong cranberry.

Things are turning for the bright side.
Even the greatest of whales is helpless in the middle of a desert.
Sharing little joys offer great hope to others.
More Fortunes >