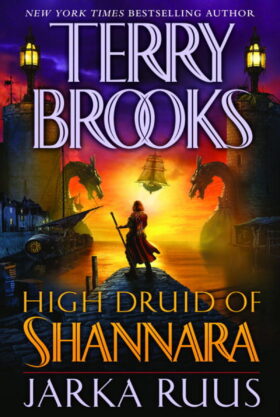 Synopsis: In The Four Lands, twenty years have passed since the events of The Voyage of the Jerle Shannara trilogy. A Third Druid Council is rife with politicking, allies and enemies are setting plots in motion and the politics outside of Paranor are no less intense.

When the Ard Rhys, head of the Druid Council, disappears without a trace, another generation of Ohmsford is called upon to aid The Four Lands, Penderrin Ohmsford, son of Bek, who teams with Khyber Elessedil and others to find and return the Ard Rhys.

Declassified by Agent Palmer: Five Quotes from Jarka Ruus the start of The High Druid of Shannara Trilogy

She had never expected friendship or even compassion from those who came to her, but she had hoped for loyalty and a sense of responsibility toward the office she held. She had been foolish to think that way, and she no longer did so. Perhaps it was not inaccurate to say that now she merely hoped that reason might prevail.

The past was the past, but it was always with you.

Peace of mind was a benefit that did not accrue to those who lacked moral restraint.

She had learned that for people like her, orphans and disadvantaged souls, gains were achieved mostly through risk. That was the nature of her lot in life, and she had long ago accepted it.

“Don’t be so grumpy. We’re lucky to be down in one piece. Smooth landings are for undamaged ships.”

Those who committed atrocities always seemed to so so out of a misconceived sense of righteousness and the greater good.

“Strakens and warlocks keep our histories, but they do not agree on what it is,” the Ulk Bog responded. He rubbed his sharp chin and sneered. “They like to change it to suit their own purposes. Liars and cheats, all! But those like myself who are not burdened with magic know the truth. The history is the history! It is not just what anyone says! Jarka Ruus have been here a thousand, thousand years, since they chose to be rid of the Elves and their kind, to come here and be free!”

She nodded, angry and disappointed with herself. “I’ll never learn anything if I keep letting myself be distracted by beautiful birds!”
“You’ll never find any joy in life if you don’t.” He came around and stood facing her. “Don’t be so hard on yourself. This takes time. It takes practice. I didn’t learn it all at once either.”

Better to allow a little light into a darkened room than to worry about what would happen once it faded.

Good clothes open many doors. Go Shopping.
Nothing in the world can take the place of persistence.
A difference, to be a difference, must make a difference.
More Fortunes >