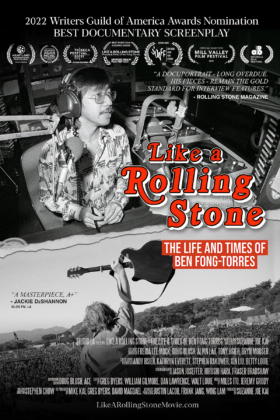 Like a Rolling Stone: The Life & Times of Ben Fong-Torres

Based On: Based The Life and Times of Ben Fong-Torres

Declassified by Agent Palmer: “Like a Rolling Stone” wonderfully orchestrates the work of journalist Ben Fong-Torres

Fong-Torres: You know, sometimes the best stories happen by accident. And that was the situation when I happened to be hanging out at an apartment in West Hollywood with a friend, a publicist for various bands and in popped Jim Morrison.

Fong-Torres: I know there are people who are driven to write every day. I don’t think I feel the need to write, but by habit, it seems like, I write pretty much every day. So when I go down to the office to my keyboard, I know that it’s going to be some… Something good’s going to come out of it.

John Burks: “Tell me more” is one of the great questions you can ask. Doesn’t even seem like a question, right? But you get people expanding on their lives, you say, “Oh, no kidding. Tell me more.” Or find some variation on a way to say that. Ben is the king of Tell Me More

John Burks: You tell the truth as best you can find it. You don’t make stuff up. You don’t bullshit people, right? Um, words gets around that that’s who you are and what you’re about. So people feel comfortable talking with you. That’s why after he’d done the interview with Marvin Gaye, Elton John was interested in talking with him.

Fong-Torres: I kind of gravitated to people who were in some ways marginalized. Having come from my background helped to direct the way I went with subjects and the way stories were done.

You are interested in higher education, whether material or spiritual.
The path of life shall lead upwards for you.
Nothing in the world can take the place of persistence.
More Fortunes >