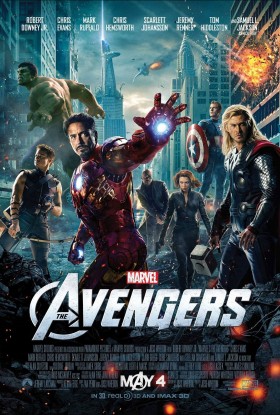 Tagline(s): Avengers Assemble!
Some assembly required.
Every team needs a Captain.
Throw down the hammer.

Synopsis: Earth’s mightiest heroes must come together and learn to fight as a team if they are to stop the mischievous Loki and his alien army from enslaving humanity.

Declassified by Agent Palmer: A Movie Review of Marvel’s Avengers and my Geek Pride shines through More Than Ever
My Second Avengers Review – A Focus on Dr. Selvig and a Hole in the Marvel Universe

Nick Fury: I recognise the council has made a decision, but given that it’s a stupid-ass decision, I’ve elected to ignore it.

Bruce Banner: I don’t think we should be focusing on Loki. That guy’s brain is a bag full of cats. You can smell crazy on him.
Thor: Have a care how you speak! Loki is beyond reason, but he is of Asgard and he is my brother!
Natasha Romanoff: He killed eighty people in two days.
Thor: He’s adopted.

Tony Stark: Alright. Hey. Alright. Good job, guys. Let’s just not come in tomorrow. Let’s just take a day. Have you ever tried shawarma? There’s a shawarma joint about two blocks from here. I don’t know what it is, but I wanna try it.

Steve Rogers: Stark, we need a plan of attack!
Tony Stark: I have a plan: attack!

Steve Rogers: Big man in a suit of armor. Take that off, what are you?
Tony Stark: Genius, billionaire, playboy, philanthropist.
Steve Rogers: I know guys with none of that worth ten of you. I’ve seen the footage. The only thing you really fight for is yourself. You’re not the guy to make the sacrifice play, to lay down on a wire and let the other guy crawl over you.
Tony Stark: I think I would just cut the wire.
Steve Rogers: Always a way out… You know, you may not be a threat, but you better stop pretending to be a hero.
Tony Stark: A hero? Like you? You’re a lab rat, Rogers. Everything special about you came out of a bottle!
Steve Rogers: Put on the suit. Let’s go a few rounds.

Thor: Do not touch me again!
Tony Stark: Then don’t take my stuff.
Thor: You have no idea what you are dealing with.
Tony Stark: Uh, Shakespeare in The Park? Doth mother know you weareth her drapes?
Thor: This is beyond you, metal man. Loki will face Asgardian justice.
Tony Stark: He gives up the Cube, he’s all yours. Until then, stay out of the way, tourist.

Nick Fury: Until such time as the world ends, we will act as though it intends to spin on.

Steve Rogers: Is everything a joke to you?
Tony Stark: Funny things are.

Thor: I thought humans were more evolved than this.
Nick Fury: Excuse me, did WE come to YOUR planet and blow stuff up?

Tony Stark: Why did Fury call us in? Why now? Why not before? What isn’t he telling us? I can’t do the equation unless I have all the variables.
Steve Rogers: You think Fury’s hiding something?
Tony Stark: He’s a spy. Captain. He’s THE spy. His secrets have secrets.

Nick Fury: You ever been in a war, Councilman? In a firefight? Did you feel an over-abundance of control?

Tony Stark: That man is playing Galaga! Thought we wouldn’t notice. But we did.

Maria Hill: When did you become an expert in thermonuclear astrophysics?
Tony Stark: Last night. The packet. Selvig’s notes, the extraction theory papers. Am I the only one who did the reading?

You are interested in higher education, whether material or spiritual.
Even the greatest of whales is helpless in the middle of a desert.
Your moods signal a period of change.
More Fortunes >