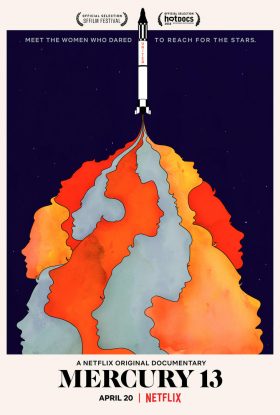 Tagline: Meet the Women Who Dared Reach for the Stars

Synopsis: This documentary profiles women who were tested in 1961 for spaceflight, but had their dreams dashed when only men were chosen to become astronauts.

Declassified by Agent Palmer: Netflix’s Mercury 13 is A Wonderful Look At the Women Who Almost Became America’s First in Space

“Most harmful behavior is based in fear. Protecting one’s perceived position in society, protecting one’s territory, or one’s physical well-being. But progress is inevitable.”

“Women astronauts. What a ridiculous idea.”

“It was a good old boy network. And there was no such thing as a ‘good old girl’ network.”

“Every day, I’d see this airplane flying overhead, and I thought, ‘I could do that too.’ My parents didn’t like that idea. People didn’t think it was for women at all, flying. But I knew better, and I liked it and I did it.” – Rhea Woltman

“There was always a certain amount of prejudice about women getting into the men’s fields.”

“You know, when you’re 18, you don’t have fear, and you don’t think of it as being brave. You think of adventures and having fun. Because 18-year-olds think nothing will ever happen to ‘em.”

“Each must be: the graduate of a navy or air force test pilot school, 1,500 hours of flight time, qualified in jet aircraft, an engineering background, and 5’11” or less.”

“I’m Jacqueline Cochran, and I really would like to be the first woman in space. Anyone who’s spent as much time in the air as I have in the last 34 years is bound to yearn to go a little bit farther.”

Interviewer: Why, in the Western program, do you think there is a need, if you feel there is a need, for women in space?
Jerrie Cobb: Well, it’s the same thing as, is there a need for men in space? I mean, if we’re going to send a human being into space, we should send the one most qualified. And in certain areas women have a lot to offer, and other areas, men do. I think that we ought to use both.

“First, let us all, among ourselves, recognize that we women pilots who want to be part of the research and participation in space exploration are not trying to join a battle of the sexes. “

“It will perhaps come as no surprise to you that I strongly believe women should have a role in space research. In fact, it is inconceivable to me that the world of outer space should be restricted to men only, like some sort of stag club.”

“Now, no woman can get up and seriously discuss a subject like this without being painfully aware that her talk is going to inspire a lot of condescending little smiles and mildly humorous winks.

But happily for the Nation, there have always been men, men like the members of this committee, who have helped women succeed in roles that they were previously thought incapable of handling.

A hundred years ago, it was quite inconceivable that women should serve as hospital attendants. Their essentially frail and emotional structure, it was argued, could never stand the horrors of a military dressing station.

Most of them would faint at the first bloody bandage. They wouldn’t be able to keep the records straight. And anyway, it was somehow indecent for a woman to be among all those soldiers, wounded or not.

Well, the rest of the story is altogether familiar to you. The women were insistent. There was a shortage of men to do the job. And finally it was agreed to allow some womén to try it provided they were middle aged and ugly–ugly women presumably having more strength of character.

I submit, Mr. Chairman, that a woman in space today is no more preposterous than a woman in a field hospital loo years ago. And I further submit that the venture would be equally successful, although this time there should be a more realistic list of qualifications for tite candidates to meet.

I wonder if anyone has ever reflected on the great waste of talent resulting from the belated recognition of women’s ability to heal.

Before 1862, there must have been thousands of women with innate nursing ability who might have helped save countless lives if only they had been allowed to. But in this scientific field, no one recognized what women could do because they were never permitted to try.

It seems to me a basic error in American thought that the only time women are allowed to make a full contribution to a better nation is when there is a manpower shortage.“

“They once asked her [Hart], ‘Why would you wanna go to the moon?’ This was in the paper. And she said, ‘With eight kids, you’d want to go to the moon too.'”

“I certainly do think women should be astronauts. If they’re physically fit, mentally alert, they’re not any different than men are. In fact, there are less women going to psychiatrists than men, so that gives you some idea as to their mental capabilities.”

Good clothes open many doors. Go Shopping.
Sharing little joys offer great hope to others.
Nothing in the world can take the place of persistence.
More Fortunes >