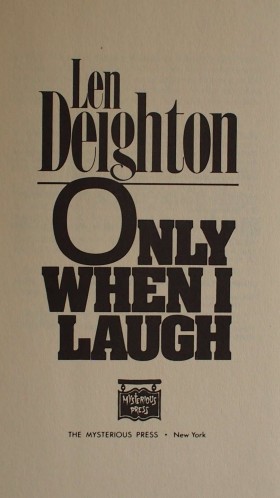 Only When I Laugh

Tagline: A Novel of Suspense

Synopsis: The year is 1968. The place is New York. Three virtuoso con artists are ate work. Silas is the leader, Bob is the young apprentice, and Liz, Silas’ mistress, is in between. On Manhattan’s Upper East Side, they pull off a “business deal” worth millions, utilizing sheer chutzpah and their amazing talents for impersonation and dialect. But back in London, Silas’ plan to bilk an emerging–and minerall-rich–African nation misfires. Then Bob decides that it’s time for him to take over the running of the operation–and take over Liz at the same time. A bank in Lebanon is their next target, and in the execution of the new caper each member of this brilliant trio gets what he or she deserves–each with a lemon twist.

Declassified by Agent Palmer: Only When I Laugh by Len Deighton: A Spoiler Free Book Review

There is an ancient saying among the people of Mesopotamia, “Four fingers stand between truth and lies,” and if you hold your hand to your face you will find that measurement to be the distance between the eye and the ear.

He was sort of in love with Liz, but he was a cold fish, and there would come one day when the computer would reject Liz’s punch card, and I’m telling you he could turn away mid sentence and never come back.

It’s like reading about people dying in traffic accidents; if it isn’t someone you know, it’s almost impossible to care, isn’t it?

“Never do that,” said Johnny. “Never relate dreams, or the stories of films you saw, it bores everyone.”

Still, I’d survived the war. I’d done a bloody sight more than survived it; I’d thrived on it. That’s why I’d never stop fighting. This was my war, and Liz and Bob were my army.Not much of an army, but then a commander has to adapt to his resources.That was the secret of command in battle; flexibility and full utilization of resources. Terrain, men, weapons, skills and surprise.

I’ve seen regiments of Bobs under fire, without enough imagination to be scared. I’ve got too much imagination, that’s my trouble, if I have any trouble, which I don’t for one moment admit.

“Yeah, O.K.” I said, and looked at Charlie, who was a giant, and wondered which bit of him I’d kick first when he started to have a go at me. It’s no good worrying, I always say. But I always worry.

Some men are like that, without doing anything, cats and women just adore them.

And my mother says wouldn’t I like to have children. What I’d like is one adult man. I can’t even go and make a jug of coffee without finding mentally retarded delinquents rolling around in the fireplace, playing airplanes.

He raised his hand and crossed his heart, but he needn’t have done. I know a harmless boob when I see one.

“Shooting people will make things better?” [Liz]
“I doubt it, but then I don’t want to shoot anyone. The guns are merely a token, a weight upon one side of a scales that are already unfairly laden the other way.” [Mr. Awawa]

“The voice of womanhood, and reason raised accusingly against the senseless violence of the male,” said Awawa. “Well, we’ve heard that one before Miss Smallwood, but women are less able to cooperate with each other than men are. Women are less tolerant than men, and women in business more ruthless than men.”

“She’s been wrong before, more than once, but if you have a signal system, then the other members of the expedition must stick to the procedure.”

“A man who isn’t greedy can never fall prey to a con trick. So greed must be built into the proposition…”

“A con trick?” said Silas. “What do you mean?”
“It’s obvious isn’t it? The fellers with the high ranks, high wages, chauffeurs and chateaus live miles from the fighting, and tell the marks who get five bob a day where to go and get shot at; it’s the classic con trick the army is.”

My mother said that a man’s life went in periods of eight years. The first eight, she said, they got German measles and whooping cough and diptheria, the second eight years they discovered girls and fell off bicycles. Then, pimples, sports cars and stiff collars until at the age of 24, according to my mother’s theory, they “settled down.”

“Well, we are the medicine men,” said Silas. “We are the observes, the witch doctors, the sociological sports of our age. We are part of the process of natural selection; for we deprive the stupid and the inefficient of wealth and prestige. Without us the balance of nature would be upset. If the stupid prosper, then our society must lose its dynamism and finally falter. We are part of the life cycle of the capitalist system.”

“Never let your troops imagine that you are retreated in order to avoid an action,” said Vegetius. “Tell them your retreat is an artifice to draw the enemy into an ambush or put you into a better position.”

“Perhaps that’s what bravery is, keeping a sense of proportion.”

“Look, caterpillar,” said Silas. “I’ve been around a long, long time, and one thing I’ll tell you true; there isn’t a man, woman or child in this world who can say they have never conned someone out of something. Babies smile for a hug, girls for a mink, men for an empire. No one, I promise you, no one, caterpillar.”

“There has to be something beyond love, something that lasts, something stronger and yet more comforting too.”

“Things change,” I said. “Men reflect the age. Each generation has to come to terms with the world as it finds it.”

The prospect of choosing between them numbed me. Why could we not go on as we were. I needed both of them: Silas, although I no longer loved him, was easy and reassuring to be with, while Bob, whom I loved, annoyed and exasperated me with his restless and ingenuous personality.

Well, Bob needed me, really needed me, and that is really all any woman wants of a man.

I’d once ordered breakfast there, and then made love to the waitress, while every guest in the place was screaming for breakfast.

The simulator had prepared you for the game, until it was hard to mark the moment when the simulation ended and combat began. Perhaps it never did, was life just a simulator, the targets popping up and, if your calculations were correct, disappearing in a puff of smoke. The simulator did not cheat, the simulator had no bias, the simulator would exist long after I was gone.

She was the “don’t knows” in a land where don’t knows were in the cast majority.

You are interested in higher education, whether material or spiritual.
Good clothes open many doors. Go Shopping.
Even a broken clock is right two times a day.
More Fortunes >