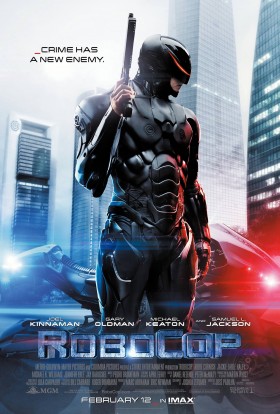 Tagline(s): We’ve got the future under control.
Your move.
Crime has a new enemy.
OmniCorp.

Synopsis: In 2028 Detroit, when Alex Murphy – a loving husband, father and good cop – is critically injured in the line of duty, the multinational conglomerate OmniCorp sees their chance for a part-man, part-robot police officer.

Declassified by Field Agent Wacker: RoboCop No Spoilers Review: Enjoy 2014’s RoboCop as its own Movie

RoboCop: Dead or alive, you’re coming with me.

Rick Mattox: I wouldn’t buy that for a dollar.

Raymond Sellars: We need to give Americans a product they can love, a figure they can rally behind.
Liz Kline: Sir, I have dissected this bill. There are no loopholes. We can’t put a machine on the streets.
Raymond Sellars: Forget machines. You saw the polls. Americans don’t want a machine. They want a product with a conscience. They want something that knows what it feels like to be human. We’re gonna put a man inside a machine.

Alex Murphy: This seems so real.
Dr. Dennett Norton: Alex, it’s-it’s very important you understand what is happening. This is real. It’s not a dream, i-it’s not drugs or anesthetics.
Alex Murphy: I know I’m dreaming because I can feel all of this.

John Lake: You got something on us? Or is this personal?
Alex Murphy: No, it’s nothing personal. Although, I don’t like you as a person.

Pat Novak: This, my friends, is the future of American justice. How many like Thomas King will pay for their crimes now that RoboCop is here? Yes, let’s not shy away from what this means, people. Men weren’t up to the task, but Alex Murphy, a robot cop, was.

Alex Murphy: Hey, Doctor, what happens if I tase an exoskeleton with a little asshole inside?
Dr. Dennett Norton: I, uh… I think w-we’re all curious to find out.
Rick Mattox: Go ahead.

Pat Novak: Now I know some of you may think that this kind of thinking is dangerous and these machines violate your civil liberties. Some of you even believe that the use of these drones overseas makes us the same kind of bullying imperialists that our forefathers were trying to escape. To you, I say… stop whining! America is now and always will be the greatest country on the face of the Earth! I’m Pat Novak. Good night.

Nothing in the world can take the place of persistence.
Whoever wants to reach a distant goal must take small steps.
Things are turning for the bright side.
More Fortunes >