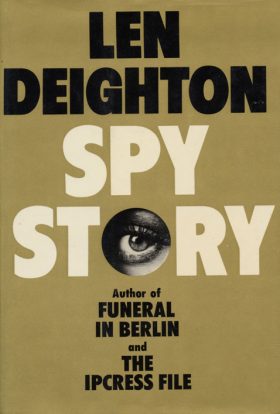 Synopsis: An attempted murder, the defection of a highly placed KGB official, and an explosive nuclear submarine chase beneath the Arctic Ocean seem to have little connection to one another. But they are the sparks that propel Pat Armstrong — also known as Harry Palmer — into the heart of a brutal East-West power play. And when Armstrong returns to his own apartment — where someone who looks and dresses just like him has taken up his identity — we are drawn into the world of spies and counterspies, plots and counterplots, that is Len Deighton’s unbeatable trademark.

Declassified by Agent Palmer: A Review of Spy Story by Len Deighton: Serious with a Sprinkle of Funny

I picked up the case loaded with spools and tape recordings, and remembered how I sprinted across these brows on the outward journey.

I didn’t get alarmed about it. You know how crazy things can sound, and then along comes a logical, rational explanation — usually supplied by a woman very close to you. So I didn’t suddenly panic, I just started to turn the whole place over systematically. And then I could scream and panic in my own good, leisurely, non-neurotic way.

I sat myself down on my sofa and gave myself a talking-to. Look, I said to myself, you know what this is, it’s one of those complicated jokes that rich people play on each other in TV plays for which writers can think of no ending. But I haven’t got any friends rich and stupid enough to want to print me in duplicate just to puzzle me. I mean, I puzzle pretty easily, I don’t need this kind of hoop-la.

‘The flowers were from my mother. To wish me many happy returns.’
‘You’re not rerunning that twenty-ninth birthday again this year?’
She hit me in the ribs with the side of the hand and knew enough anatomy to make it hurt.

I didn’t answer. I wondered too. She wanted me to admit that I couldn’t live without her. And I had the nasty feeling that as soon as I did that, she’d up and leave me. So we continued as we were: in love but determined not to admit it. Or worse: declaring our love in such a wa that the other could not be sure.

Well, you can’t make women happy, that’s a kind of fundamental law of the universe. You try and make them happy and they’ll never forgive you for revealing to them that they can’t be.,

It wasn’t Marjorie. It was a broad-shouldered elderly Soviet security Colonel names Stok.

And there was the taciturn Mr. Dawlish, who eyed me with the steely predatory stare that I’d once known so well. He was a high-ranking civil servant who never finished his wine.

‘You haven’t forgotten that tomorrow we’re having lunch, darling.’
‘How could I, you’ve reminded me every hour on the hour.;
‘Poor darling. We don’t have to talk–we can just eat.’ She hugged me. ‘ You make me feel like a terrible shrew, Patrick, and I’m not. I’m really not. I can’t help being possessive. I love you.’
‘We’ll talk,’ I said.

‘You don’t like him, I know. It’s difficult to see the situation when there are personal feelings involved.’
‘Ferdy, you’re in no position to pronounce judgement on people who are less than bright. Or those who let personal feelings warp their judgement. Toliver is not a part of any intelligence service and I’ll bet everything I own on that.’

From time to time she would embrace herself as though she was cold, or needed love or just to make sure her arms were still there. She did it now.

I wondered how much longer I could go on working in a project that swatted warships like flies and measured wins in ‘taken-out’ cities.

If you measure power and success b the time taken to move in comfort to or from a city centre–and many use that criterion–then the next couple of hours was the pace-setter by which all London’s tycoons and politicians must measure themselves.

But doctors can’t pass a street accident, nor dips an open handbag, coppers can’t pass a door with a broken lock, Jesuits can’t pass sin in the making, everyone falls prey to their training.

Some of the corridor lights were dimmed from 2000 until 0700 hours in the morning. Apart from that, there was little difference between night and day, except that grapefruit segments and orange juice were on the chilled shelf for one meal in three.

‘The history of the world,’ said Ferdy. ‘Overlooking small enemies in the threat of greater ones–all history comes down to that finally.’

I smiled. I was trying to master that grim smile of Schlegel’s. I am never too proud to learn, and I had a lot of uses for a smile like that.

‘Are they treating you well in here?’ said Dawlish.
‘Pickled fish for breakfast,’ I said.
‘The reason I ask,’ said Dawlish, ‘is that we have a bit of a problem … It’s a security job … ‘
I suppose I might have guessed that a man like that doesn’t fly to Norway to bring anyone grapes.

Rules of the Game

Chapter 1
As each bound ends, units cease to be operative until commencement of next bound. – Rules. All games. Studies Centre. London

Chapter 2
In games where the random chance programme is not used, and in the event of two opposing units, of exactly equal strength and identical qualities, occupying same hex (or unit of space), the first unit to occupy the space will predominate. – Rules. ‘TACWARGAME’. Studies Centre. London

Chapter 4
The senior officer in Control Suite at commencement of game is CONTROL. Change of CONTROL must be communicated to Red Suite and Blue Suite (and any additional commanders), in advance and in writing. CONTROL’s ruling is final. – Rules. ‘TACWARGAME’. Studies Centre. London

Chapter 5
No game decisions or plays are valid or binding except those made in writing during game time. – Rules. ‘TACWARGAME’. Studies Centre. London

Chapter 6
There is no limit to the number of staff officers or advisers in either Suite, nor need the Red and Blue Suite staffs be of equal size. – Rules. ‘TACWARGAME’. Studies Centre. London

Chapter 7
The success or failure of ALL games will be measured ONLY by the lessons learned through post-game analysis (POGANA). In this respect the object of each game is not victory. – ‘Notes For Wargamers’. Studies Centre. London

Chapter 8
Line reject. To miss a move. Wargamers must remember that fuel, fatigue and all logistic support will continue to be expended during such a move. Continuous instructions (air patrols etc.) will be continued and naval units will continue on course unless halted by seperate and specific instruction. Therefore, think twice before rejecting. – Glossary. ‘Notes For Wargamers’. Studies Centre. London

Chapter 9
Chess. A pejorative term used of inexperienced players who assume that both sides make rational decisions when in full possession of the facts. Any history book provides evidence that this is a fallacy and wargaming exists only because of this fallacy. – Glossary. ‘Notes For Wargamers’. Studies Centre. London

Chapter 10
The actions of the civil power will not be included in the TACWARGAME. – Rules. ‘TACWARGAME’, Studies Centre. London

Chapter 11
Intelligence and espionage (in plus and minus categories) are programmed according to Section 9 of the STUCEN Programming Manual. Commanders are solely responsible for information, false or otherwise, collected outside game time, i.e. in off-duty hours. – Rules. All Games. Studies Centre. London

Chapter 12
At the discretion of CONTROL game time can be speeded up, halted or reversed so that bounds can be replayed with the advantage of hindsight. No appeal can be made except on the grounds that notice in writing was not received before CONTROL’s action. – Rules. All Games. Studies Centre. London

Chapter 13
Conclusions reached by any member of STUCEN staff concerning the play are deemed to be secret, whether or not such conclusions were based upon play. – Standing Routine Orders. Studies Centre. London

Chapter 14
Attacker. For the purposes of the assessment the ‘phasing’ player, who brings his unit into range, is called the attacker. the player against whom the unit is brought is called the defender. – Glossary. ‘Notes For Wargamers’. Studies Centre. London

Chapter 15
Global commitment negative. A game with global commitment negative is restricted to the military forces on the board. Global commitment positive: A game in which either or both sides will be reinforced by land, sea or air forces from other theatres of war. E.g. during a Northern Fleet war game Soviet naval units might be reinforced by elements of Baltic Fleet or Polish naval units. NB – Such introduced elements can be larger than the sum of forces available at game opening. – Glossary. ‘Notes For Wargamers’. Studies Centre. London

Chapter 17
Environment neutral. The environment neutral condition is one in which weather, radio reception, sonar operation and water temperatures remain constant throughout the game. This does not change the chance of accidents (naval units, merchant shipping, air), delays of material or communications or random machine operation. Rules. ‘Notes For Wargamers’. Studies Centre. London

Chapter 19
Submarine units of any type surfaced within range of enemy Class A missiles will be considered destroyed. Rules. ‘TACWARGAME’. Studies Centre. London

Chapter 20
It is in the nature of the war game that problems arise that cannot be resolved by the rules. For this reason CONTROL should be regarded as consultative. It is no recommended that CONTROL resolves such problems until adequate exploration of the problem has taken place between all players. ‘Notes For Wargamers’. Studies Centre. London

Chapter 21
PRINTOUT (pink sheet total) is the end of the game. Subordinate, aggregate and continuous play not included in PRINTOUT are not part of the game. Rules. ‘TACWARGAME’. Studies Centre. London

Things are turning for the bright side.
To let another into your heart, first let yourself in.
Today it’s okay to make a few choices by going with your instincts.
More Fortunes >