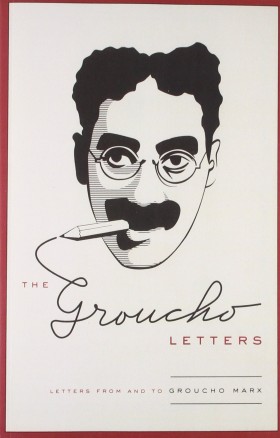 Tagline: Letters from and to Groucho Marx

Synopsis: Donated to the Library of Congress in the mid-1960s, Groucho Marx’s correspondence was first crafted into this celebration of wit and wisdom in 1967. Reissued today with his original letters and humor intact, The Groucho Letters exposes one of the twentieth century’s most beloved comedian’s private insights into show biz, politics, business, and, of course, his illustrious personal life. Included are Marx’s conversations with such noted personalities as E. B. White, Fred Allen, Goodman Ace, Nunnally Johnson, James Thurber, Booth Tarkington, Alistair Cooke, Harry Truman, Irving Berlin, and S. J. Perelman.

Declassified by Agent Palmer: Book Review: The Groucho Letters, A Must Read

“A town so boring the tide went out and never came back in.”

“The last days of the newspapers seem to be rushing towards us with frightening speed.”

“What are you up to? News about you is as scarce as hen’s teeth. Normally, I don’t use this phrase, but we happen to have a hen in our backyard and she has only one tooth. I’m sure you’re familiar with the rest-‘The whole tooth, and nothing but the tooth.’”

“…when I say alone, I mean no agents, no family, no one but you two-sit down alone, and talk it out.”

“It isn’t for the dead I grieve,
It’s for the living whom the dead bereave.”

“…always live at the best hotel in town-but in the cheapest room. This is much better than the best room in a cheap hotel, for it gives you prestige and distinction.”

“Look, I’ve seen some of the next generation—perhaps it’s just as well if the whole thing ends right here.”

“I don’t quite know why I remained honest for I spring from a long line of thieves. I guess I was just lucky.”

“‘Groucho, every word I said was the God’s honest truth.’ This, of course, was a lie, but since I was getting a free lunch I was disinclined to argue with him.”

“Regards, affection, admiration and, if you want to toss in a few superlatives of your own, I have no objection.”

“I’m goggle-eyed from watching the convention. Until TV, nobody knew the caliber of clowns governing the country.”

“Thanks for your piece on dirty comedians. It blew a fresh breeze across a smutty section of America.

Freedom of speech is one thing, but these gents are overdoing it. And when I say “gents,” this is where most of them should be doing their act.”

However, if there is any ill feeling or bitterness between you, it will eventually affect your work. If that feeling does exist, sit down calmly together, alone—when I say alone, I mean no agents, no family, no one but you two-sit down alone, and talk it out.

“I don’t quote know why I remained honest for I spring from a long line of thieves. I guess I was just lucky.”

Fame and fortune are coming your way.
Today it’s okay to make a few choices by going with your instincts.
Your moods signal a period of change.
More Fortunes >