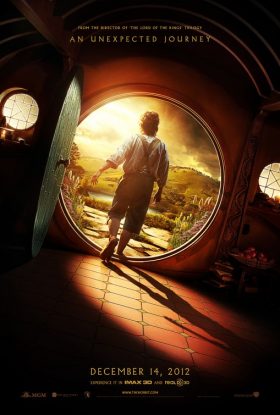 The Hobbit: An Unexpected Journey

Tagline(s): From the smallest beginnings come the greatest legends.
One journey started it all.

Based On: Based on The Hobbit by J.R.R. Tolkien

Synopsis: A reluctant Hobbit, Bilbo Baggins, sets out to the Lonely Mountain with a spirited group of dwarves to reclaim their mountain home (Erebor) and the gold within it from the dragon Smaug.

Declassified by Agent Palmer: A Movie Review of The Hobbit: An Unexpected Journey | The Return to Middle Earth

Gandalf: If you want to Change the Weather, find yourself another Wizard!

Old Bilbo: In a hole in the ground there lived a hobbit. Not a nasty, dirty, wet hole full of worms and oozy smells. This was a hobbit-hole and that means good food, a warm hearth, and all the comforts of home.

Galadriel: The dragon has long been on your mind.
Gandalf: This is true, my lady. Smaug owes allegiance to no one, but if he should side with the Enemy… A dragon could be used to terrible effect.

Old Bilbo: My dear Frodo, you asked me once if I had told you everything there was to know about my adventures. And while I can honestly say I’ve told you the truth, I may not have told you all of it. I am old, Frodo. I am not the same hobbit as I once was. It is time for you to know what really happened.

Gandalf: You will have to do without pocket handkerchiefs, and a great many other things, before we reach our journey’s end, Bilbo Baggins. You were born to the rolling hills and little rivers of the Shire, but home is now behind you. The world is ahead.

Frodo: They’re all coming. Except for the Sackville-Bagginses, who are demanding you ask them in person.
Old Bilbo: Are they indeed? Over my dead body.
Frodo: They’d probably find that quite agreeable. They’re convinced you have tunnels overflowing with gold.
Old Bilbo: It was one small chest – hardly overflowing. And it still reeks of troll!

Dori: Mr. Gandalf, can’t you do something about this deluge?
Gandalf: It is raining, Master dwarf, and it will continue to rain until the rain is done. If you wish to change the weather of the world, you should find yourself another wizard.
Bilbo Baggins: Are there any?
Gandalf: What?
Bilbo Baggins: Other wizards?
Gandalf: There are five of us. The greatest of our order is Saruman the White. And then there are the two Blue Wizards… You know, I’ve quite forgotten their names.
Bilbo Baggins: And the fifth?
Gandalf: Well, that would be Radagast the Brown.
Bilbo Baggins: Is he a great wizard, or is he more like you?
Gandalf: Well, I think he is a very great wizard… in his own way. He’s a gentle soul who prefers the company of animals for others. He keeps a watchful eye over the vast forest lands to the East, and a good thing too. For always evil will look to find a foothold in this world.

Great Goblin: Bones will be shattered, necks will be wrung! You’ll be beaten and battered, from racks you’ll be hung! You will die down here and never be found, down in the deep of Goblin Town!

Bilbo Baggins: Oh no. No. There’s nobody home! Go away, and bother somebody else! There’re far too many dwarves in my dining room as it is. If this is some cluthead’s idea of a joke, I can only say, it is in VERY poor taste!

Gandalf: Enough! If i say Bilbo Baggins is a burglar then a burglar he is!

Bilbo Baggins: They pillaged the pantry. I’m not even going to tell you what they’ve done to the bathroom, they all but destroyed the plumbing. I don’t understand; what are they doing in my house?

Balin: Don’t mind him, laddie. Thorin has more cause than most to hate Orcs. After the dragon took the Lonely Mountain, King Thror tried to reclaim the ancient dwarf kingdom of Moria… but our enemy had got there first. Moria had been taken by legions of Orcs, led by the most vile of all their race, Azog the Defiler. The giant Gundabad Orc had sworn to wipe out the line of Durin. He began by beheading the King. Thrain, Thorin’s father, was driven mad by grief. He went missing, taken prisoner or killed; we did not know. We were leaderless, defeat and death were upon us. That is when I saw him; the young dwarf prince facing down the Pale Orc. He stood alone against this terrible foe, his armour rent, wielding nothing but an oaken branch as a shield… Azog the Defiler learned that day that the line of Durin would not be so easily broken. Our forces rallied and drove the Orcs back; our enemy had been defeated… but there was no feast or songs that night, for our dead were beyond the count of grief. We few had survived and I thought to myself then ‘There is one I could follow. There is one I could call King’.

Thorin Oakenshield: Rumors have begun to spread, The dragon Smaug has not been seen in many years… Perhaps the vast wealth of our people lies unprotected… perhaps it is time to take back Erebor!

Elrond: Have you forgotten? A strain of madness runs deep in that family. His grandfather lost his mind, his father succumbed to the same sickness. Can you swear Thorin Oakenshield will not also fall? Gandalf, these decisions do not rest with us alone. It is not up to you or me to redraw the map of Middle-earth.

Dwalin: I thought we had lost our burglar.
Thorin Oakenshield: He’s been lost ever since he left his home. He should not have come, he has no place among us.

Bilbo Baggins: I’ve never stolen a thing in my life.

Radagast: A dark power has found its way back into the world.

Today it’s okay to make a few choices by going with your instincts.
Even a broken clock is right two times a day.
Good clothes open many doors. Go Shopping.
More Fortunes >