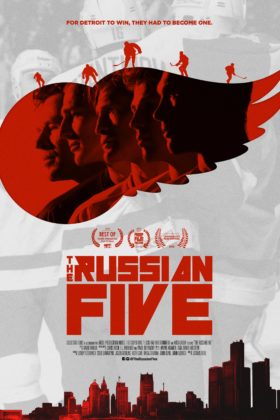 Tagline: For Detroit to Win, They Had to Become One

Based On: The Russian Five: A Story of Espionage, Defection, Bribery and Courage by Keith Gave

Synopsis: In the late 1980s, the Detroit Red Wings worked to finally break their decades long Stanley Cup drought by extracting players from the Soviet Union, and in the process, changed the way North American hockey is played.

Declassified by Agent Palmer: The Russian Five is much more than just a hockey documentary

“There hadn’t been a championship in Detroit since 1955.during the glory years of Gordie Howe.”

“The Societ Red Army hockey club was the gold standard when it came to international hockey. They won everything.”

“The problem was, there was an Iron Curtain.”

“There’s no book, you know. You couldn’t go anywhere and say, ‘Okay, how do you get a guy to defect?'”

Jeff Daniels: The work ethic, that is the Midwest, we have to outwork you. You went to Yale. I went to Central Michigan University. So I gotta outwork you… Back when Detroit was truly the Motor City, in, you know, the ‘40’s… We were jammin’ cars out of here. That’s gone. You’re living in a part of the country that everybody thinks is worthless. And the Red Wings have always been a salve for the city of Detroit.

Mickey Redmond: You see, hockey players’d get either sticks or pucks in the face, and they get stitches. As soon as they’re fixed up, they’re back out going again. I think people in Detroit, Michigan, the automotive capital of the world, really really connected with that kind of thought process.

Jim Devellano: I thought it would take forever. And I was getting nervous. I didn’t feel you could get enough players out of one draft, and I knew that there were good players in Europe. Especially in Russia.

Keith Gave: I’d read enough about reporters being used as pawns in the middle of espionage and I’m figuring ‘Why not me?’

Keith Gave: I said, ‘You know, the only thing I ask… I want the story first. If you can give me that, I’ll pass along a message to these guys. Couple weeks later, I was on my way to Helsinki, Finland.

Sergei Federov: I have a guy from KGB and I choose not to tell him ‘cause I don’t wanna get anybody in trouble.