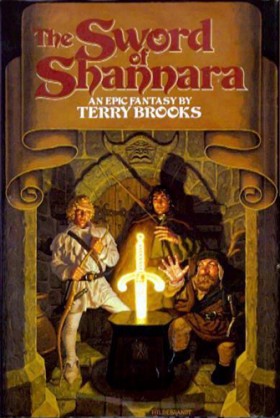 The Sword of Shannara

Synopsis: Living in peaceful Shady Vale, Shea Ohmsford knew little of the troubles that plagued the rest of the world. Then the giant, forbidding Allanon revaled that the supposedly dead Warlock Lord was plotting to destory the world. The sole weapon against this Power of Darkness was the Sword of Shannara, which could only be used by a true heir of Shannara–Shea being the last of the bloodline, upon whom all hope rested. Soon a Skull Bearer, dread minion of Evil, flew into the Vale, seeking to destroy Shea. To save the Vale, Shea fled, drawing the Skull Bearer after him…

Declassified by Agent Palmer: Thanks to a friend, I’ve entered the World of Shannara

“The deep silence was unsettling, particularly in view of the rumors of a frightening black-winged creature sighted in the night skies north of the valley only days earlier.”

“‘I have no idea what you’re talking about, but Shea and I are brothers and what happens to one must happen to both.'”

“‘I have placed a small pouch which contains three Elfstones. They will provide you with guidance and protection when nothing else can. Be cautioned – they are for Shea alone and to be used only when all else fails.'”

“He had to admit Menion Leah would be a good man to have around in a fight, but at the same time he was not sure whose side the unpredictable fellow would decide to take.”

“Herein lies the heart and soul of the nations.
Their right to be free men,
Their desire to live in peace,
Their courage to seek out truth,
Herein lies the Sword of Shannara.”

“They became sleepwalkers in a world of half-dreams and rambling thoughts with no break in the wearing march or the never-ending, silent black trunks that came and passed in countless thousands.”

“Why would you now turn your back on all that, in favor of what your common sense tells you—a reasoning process that relies on fact and stimuli accumulated in this world, your material world, unable to transpose itself to an existence where even your most basic understandings have no meaning.”

“the future was inextricably tied to the past, an interwoven tapestry of events and ideas that would never be entirely severed.”