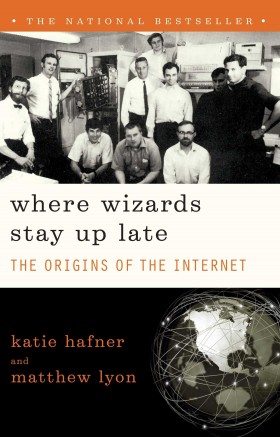 Where Wizards Stay Up Late: The Origins of the Internet

Synopsis: Many years ago, it didn’t exist. Today, twenty million people worldwide are surfing the Net. Where Wizards Stay Up Late is the exciting story of the pioneers responsible for creating the most talked about, most influential, and most far-reaching communications breakthrough since the invention of the telephone.

Declassified by Agent Palmer: An Agent Palmer Book Report: Where Wizards Stay Up Late: The Origins of the Internet

Suddenly “the specter of wholesale destruction,” in the president’s words, bore down on the American psyche.

By contrast, he [Eisenhower] loved the scientific community. He found scientists inspiring–their ideas, their culture, their values, and their value to the country–and he surrounded himself with the nation’s best scientific minds.

McElroy and P&G had created a large “blue-sky” research laboratory, had funded it well, and rarely if ever pressured scientists to justify their work.

“the freewheeling methods of outstanding academic scientists and engineers who had always been free of any inhibiting regimentation and organization.”

“If someone stole an idea from him,” Louise recalled, “I’d pound the table and say it’s not fair, and he’d say, ‘It doesn’t matter who gets the credit; it matters that it gets done.’” Louise Licklider on her late husband

The idea on which Lick’s worldview pivoted was that technological progress would save humanity.

“The key is self-motivating exhilaration that accompanies truly effective interaction with information through a good console and a good network to a good computer.”

Together, Lick suggested, man and machine would perform far more competently than either could alone.

In typical fashion, where his most passionate beliefs masqueraded as a bit of a joke, Licklider nicknamed it the Intergalactic Computer Network.

He would extend the concept of the Intergalactic Network to mean not just a group of people to whom he was sending memos but a universe of interconnected computers over which all might send their memos.

But by the time he left in 1964, he had succeeded in shifting the agency’s emphasis in computing R&D from a command systems laboratory playing out war-game scenarios to advanced research in time-sharing systems, computer graphics, and improved computer languages.

“The process of technological development is like building a cathedral,” remarked Baran years later. “Over the course of several hundred years new people come along and each lays down a block on top of the old foundations, each saying, ‘I built a cathedral.’ Next month another block is placed atop the previous one. Then comes along an historian who asks, ‘Well, who built the cathedral’ Peter added some stones here, and Paul added a few more. If you are not careful, you can con yourself into believing that you did the most important part. But the reality is that each contribution has to follow onto the previous work. Everything is tied to everything else.”

The richly academic atmosphere at BBN earned the consulting firm a reputation as “the third university” in Cambridge.

It was a rarefied environment–the cognac of the research business.

Lincoln Laboratory was proving to be a perfect incubator for the kind of genius that ARPA would need to push computing into the interactive, and interconnected, age.

“We take the position that it will be difficult to make the system work,” BBN wrote hedgingly in its proposal.

New Year’s Day, 1969, was the last time Frank Heart’s group would be able to rest for quite a while. The following week, the contract to build the first Interface Message Processors officially began.

Even if you could integrate all the hardware and software and demonstrate the feasibility of a computer network, some pointed out, there still wasn’t any profit in it for a company like AT&T or IBM, not as a business proposition.

“There was an infinity of ways we could go wrong, and a substantial number of ways to go right,” said Walden, the first programmer Heart had signed on. “Good engineers find one of the ways of going right.”

On his deathbed in 1969, Dwight Eisenhower asked a friend about “my scientists” and said they were “one of the few groups that I encountered in Washington who seemed to be there to help the country and not themselves.”

The NWF was an adhocracy of intensely creative, sleep-deprived, idiosyncratic, well-meaning computer geniuses.

But the less formal meaning seemed even more fitting. “The other definition of protocol is that it’s a handwritten agreement between parties, typically worked out on the back of a lunch bag,” Cerf remarked, “which describes pretty accurately how most of the protocol designs were done.”

As the talks grew more focused, it was decided that the first two applications should be for remote log-ins and file transfers.

Then again, technological advances often begin with attempts to do something familiar. Researchers build trust in new technology by demonstrating that we can use it to do things we understand. Once they’ve done that, they next steps begin to unfold, as people start to think even further ahead. As people assimilate change, the next generation of ideas is already evolving.

In early July 1972, the final touches were put on FTP, and Jon Postel, now the editor and distributor of the Requests For Comments, released it as RFC 354.

Things only got better as the network grew and technology converged with the torrential human tendency to talk.

Just as the LP was invented for connoisseurs and audiophiles but spawned an entire industry, electronic mail grew first among the elite community of computer scientists on the ARPANET, then later bloomed like plankton across the Internet.

The tendencies of the ARPANET community ran strongly democratic, with something of an anarchic streak.

Proclamations of officialness didn’t further the Net nearly so much as throwing technology out onto the Net to see what worked. And when something worked, it was adopted.

“Tomorrow, computer communications systems will be the rule for remote collaboration” between authors, wrote Baran and UC Irvine’s Dave Farber. The comments appeared in a paper written jointly, using e-mail, with five hundred miles between them. It was “published” electronically in the MsgGroup in 1977. They went on: “As computer communications systems become more powerful, more humane, more forgiving and above all, cheaper, they will become ubiquitous.”

At the same time, the growth of the network gave rise to a new problem. “When we got to about two thousand hosts, that’s when things really started to come apart,” said Craig Partridge, a programmer at BBN. “Instead of having one big mainframe with twenty thousand people on it, suddenly we were getting inundated with individual machines. Every host machine had a given name, “and everyone wanted to be named Frodo,” Partridge recalled.

“Standards should be discovered, not decreed,” said one computer scientist in the TCP/IP faction. Seldom has it worked any other way.

The network was built in an era when Washington provided little guidance and a lot of faith.

The path of life shall lead upwards for you.
Your moods signal a period of change.
Sharing little joys offer great hope to others.
More Fortunes >