During the summer of 1993, Jurassic Park stormed through theaters and into our hearts. But that wasn’t the only dinosaur media in our hearts, especially if you were a student in elementary or middle school. “I have a game” would have been the safer words for John Hammond to say, as opposed to “I have an Island off the coast of Costa Rica,” but even though it didn’t work out for Hammond, that didn’t mean you couldn’t create your own Jurassic Park… with DinoPark Tycoon! 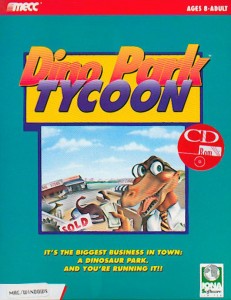 Developed by Manley & Associates Inc., and published by MECC, the Minnesota Educational Computing Consortium (or Corporation), DinoPark Tycoon was an educational business administration simulation computer game, and it still is. On one of the first pages on what is a very sad and not-well-put-together game manual is the following:

Step right up and try your hand at managing a roadside attraction that features dinosaurs. We’ve got big ones, little ones, fat ones, and green ones. For a mere $3.50, visitors can see the most magnificent animals ever to trod on grass. And it’s all yours! The DinoPark Tycoon™ software program puts you in the driver’s seat.

Everyone dreams of the fortune they could build if only given the chance to take the reins of power. DinoPark Tycoon makes this dream come true by letting you match your skills against the whims of the marketplace and the challenges of running a successful tourist attraction. If you keep your business afloat for a number of years, you may be able to sell it for a handsome profit and retire early. Or you can choose to become a dinosaur magnate and get on the cover of Dino Times. Best of all, you’ll have a lot of fun with DinoPark Tycoon.”

So, we get to have a lot of fun attempting to become virtual John Hammonds. Although I was one of the few in my class to remember who Hammond was from the movie, I usually couldn’t do much better than him in the game either. Usually, my dinosaurs either ate each other, escaped, or I never raised the money to buy more than one and went bankrupt in a year, but that wasn’t always the case. 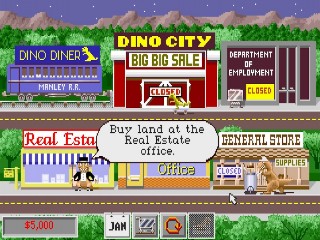 Let’s look at the game setup first. To begin you start in the bank where you are told, “The bank has approved a business loan of $5,000. Payments will be made monthly. Remember that you have to buy land, fencing, dinosaurs, and food. Good luck on your venture!”

After leaving the bank, a dinosaur in tails and a top hat walks you through the setup of your park in a tutorial sort of way. Mr. Top Hat Dino, as I’ll call him, stands outside a building and says “Buy land at the Real Estate office,” then moving to the front of a different building, “Buy fencing at the general store,” then “Hire an employee here,” “Buy a dinosaur at Dino City,” and lastly “Buy food for the dinosaur here.” Since we never really see Mr. Top Hat Dino again, it’s nice that he helped with the tutorial to get you started.

But let’s take a step back and look at the setup. First you need to buy land. Three options there; desert at $500 per acre, plains at $1,000 per acre, or marsh at $750 per acre. Interestingly, the order I listed them in is the order they appear, which means from left to right it goes from driest to wettest and not from low cost to high cost. I’m not sure why that is, but maybe it’s important.

Once you select the kind of land you want to buy, you can choose the location of the acre you’re buying within your park. There are ten acres, each apportioned as a pen and you can buy as little or as much as you want throughout the game. But don’t buy too much land too fast! Heed the tutorial notes from our friend Mr. Top Hat Dino and all the other stuff your $5,000 bank loan needs to buy to get you off the ground.

Moving on to the General Store, you have the options to buy fences, concessions, advertising, and a special offer, and they all have tacky salesman descriptions.

The four options for fencing with their salesman speak descriptions and prices are “Wood: Thrifty! Rustic look and low, low price!! ONLY $1,000 a pen,” or “Chain Link: Good Buy! Tough attractive metal! ONLY $2,500 a pen,” or  “Cement Wall: Our Best!!! Stronger!! Safer!! ONLY $5,000 a pen” or “*Bonus* Electricity: Adds jolt to your security!! ONLY $1,000 a pen.” Obviously, this requires some planning, because the type of fence you require to keep your dinosaur in it’s pen is related to the dinosaur you’re going to house in that pen.

Buying stuff at the General Store

The concessions also have great tacky salesman speak. Food Stand says “Could be a money-maker…” and “Sell treats like Dino Dogs!” Rest Rooms says “A must have, and a good deal!” Gift Stand says “Could be another money-maker…” and “Sell items like Tricera-tops!” Parking Lots says “Increase park visitor potential!” These may be humorous, but the Advertising takes the cake.

Then onto the advertising section of the General Store. Fliers says “Cheap way to reach people – just hand these out!” Newspaper says “Full page ads get attention in almost every household!” Radio says “Words, sound effects, and a catchy jingle – people are hooked!!” While T.V. says “Get ready for a REALLY BIG response to television ads!!!” At this point, I must say they went overboard with the exclamation points, but it is a game from 1993 targeted to a young audience.

The Special Offer in the General Store is “A Deluxe Tiki Torch set for you front gate walkway.” Can we say Jurassic Park, anyone?

Hire your staff at the Employment Office

Then finally we get to the fun part… Choosing the dinosaurs for your park at Dino City, which is always having a “BIG BIG SALE” and has a flashing sign saying “Over 1 Billion Hatched.” Your options here are: 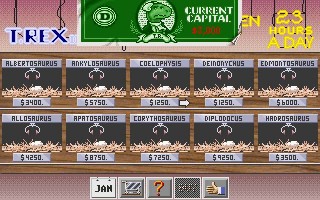 Lastly, it’s off to your office, where you can set the ticket prices.  Then, it’s finally time to open the park. But it isn’t time to relax and sit back while watching the money roll in. Dinosaurs will escape and break fences, or your workforce will call off for sick days. You may require more tour guides, or a dinosaur may get sick. All of this happens once you open your park, and it is your job to fix problems as they arise while maintaining a profit to pay back the bank and, later, make improvements to your park.

Your very own personal Jurassic Park

This was not the first “tycoon” game in the tycoon series, which was not developed by just one publisher or developer. Everyone seems to have their hand in on the tycoon action. The Tycoon series was started three years prior in 1990 by Sid Meier of Civilization fame and Microprose with Sid Meier’s Railroad Tycoon. Also in 1993, Sid Meier’s Railroad Tycoon Deluxe was released followed by Pizza Tycoon by Software 2000 and Transport Tycoon by Chris Sawyer in 1994, Transport Tycoon Deluxe in 1995, Airline Tycoon by Spellbound in 1998, Railroad Tycoon II by PopTop in 1998 and RollerCoaster Tycoon and RollerCoaster Tycoon: Corkscrew Follies by Chris Sawyer both in 1999. Even more Tycoon games followed from 2000 on, and more than 80 Tycoon games were released since then.

Learning was just part of the game

Outside of the Railroad Tycoon games, DinoPark Tycoon may be the best remembered “tycoon” game. The bottom line is that DinoPark Tycoon was a fun and engaging, if not at times frustrating, game.

It was available for purchase, but many first became introduced to the game in school computer rooms, along with Oregon Trail and, in my school, Wolfenstein 3D. If this game hadn’t shared its birth year with Jurassic Park, I don’t think it would have done as well or still be as well remembered today. We’re lucky that wasn’t the case.

You can find copies online, but it can also be found in many abandonware sites, so get a copy. You may have to run DOSBox to get it to work, but it is quite the trip through memory lane. You may even hear the bell ring in your head! Let’s be honest, 1993 was a banner year for dinosaurs. With Jurassic Park and DinoPark Tycoon, they had two big hits!

Courtesy is the password to safety.
Things are turning for the bright side.
Today it’s okay to make a few choices by going with your instincts.
More Fortunes >