This truly displays the fact that art and inspiration have no borders, or at least don’t acknowledge political ones. 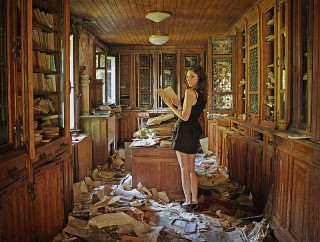 Welcome to the Library by Lady-Schnaps

First up is “Welcome to the Library” by Lady Schnaps from France, which is a picture of model Manon M. in the Library of Maison de Maitre.

What strikes me most is not the mess, but the model Manon, standing in the midst of such chaos peering back over her shoulder at the camera, while holding what she appears to have been looking for. That is assuming, she made the mess in looking for the book in her hand.

Having no other knowledge, it’s an obvious conclusion, but there is also the possibility that she just found it that way. Either way, I think she’s obviously found something of value, or at least of interest to her, in the chaos of the Library of Maison de Maitre. 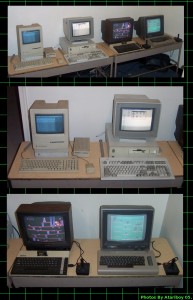 Next up is the reason people don’t go to libraries anymore, much less have them in their homes or mansions, as the case may be.

The photo titled “Home Computers OLD SCHOOL” by Atariboy2600 a.k.a. John Calcano of Utah, displays a Macintosh Class II, IBM PS/2 with Windows 3.11, Atari 800XL and a Commodore 64. These computers were all a part of the computer revolution and the software revolution that followed, creating the internet as we now know it.

I applaud John for the picture and for still maintaining these classic machines in good working order. In the caption, he asks “What YOUR first computer was?” I don’t know, I just know mine came with DOS and I could do some BASIC programming on it. All in all, this is a trip down memory lane and makes me wish I had held on to a few of my old computers.

Those computers gave way to video games which ran the gamut from text based games to Donkey Kong pictured in the photo, eventually leading to the second computer game boom in the late 80’s and early 90’s from which the classic Quake emerged. 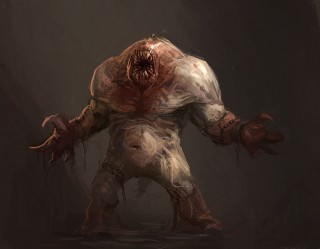 Quake was the inspiration behind this wonderful piece of art from Abel Oroz from Spain depicting a Shambler from the original game.

In his caption he laments that he “never understood why they took all Quake sequels to that generic futuristic setting when they had that awesome mix of medieval dark ages, high-tech and Lovecraft mythos in the original one.” And I agree.

I thoroughly overplayed Quake, back in the day, and I played a few of the sequels, yet I never took the time to stand back and question the loss of the Lovecraft mythos, as Abel has done.

This piece is beautifully crafted, but it’s the caption that now has me wondering the same thing. Why did they forsake the Lovecraft mythos that was a standard of the first Quake? When you go back now and think of the market for first-person-shooters at the time, they had a solid enough foundation that they didn’t need to go to a futuristic setting, but they did.

And now, thanks to Abel, I’m left wondering the same thing he brought up in the caption… Why did id Software move away from Lovecraft? 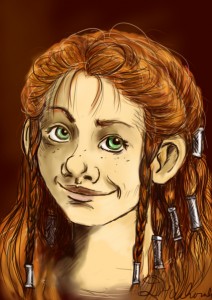 One question that I don’t need to answer is what would a lady dwarf look like. And that is because I came across the aptly titled “Little dwarf lady” by DajaBeeSensei a.k.a. Daniela Suchomelova from Czech Republic.

In the caption, Daniela gives her lady dwarf, named Ďury, some back story, saying that “she does not have a beard, therefore is bullied since childhood,” and adds that she is a blacksmith. This is Daniela’s original character from the world of J.R.R. Tolkien’s Middle Earth.

And although, I have read the books, this picture and the caption always bring me back to the Peter Jackson Lord of the Rings Trilogy, where Gimli is telling Éowyn that it’s a myth that there are no dwarf women.

And here’s at least one talented artist’s rendition to dispel that myth, although I fear it will take more than one portrait to completely lay that myth to rest.

Last, but certainly not least, is something that you seems to have happened only after much hassle. 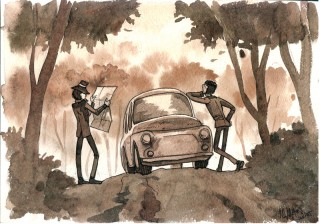 This Lupin the Third fan art, titled “Lupin III watercolour” by Masha-Ko a.k.a. Mariya Konopatova from Russia, portrays Daisuke Jigen looking at a map, while Lupin III, impatiently waits for something.

Odds are, after a close getaway from Inspector Zenigata of Interpol, the two got lost getting to the rendezvous with Goemon or Fujiko. I can only guess that Lupin wanted Jigen to keep going, while Jigen, ever the practical one, stopped the car to consult a map.

I am always amazed at the talent level of DeviantArt and the fact that it is actually a worldwide talent pool, makes discovering new pieces and artists that much more fun. That’s all for this edition of Small Oddities.