Zapped! It’s everything you want in an 80’s Science Fiction Film with extra Boobs 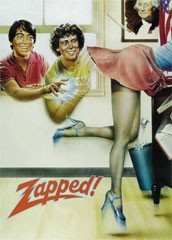 In 1982, two years before Charles in Charge teamed up Scott Baio and Willie Aames, they were together in Zapped!, a cheesy 80’s science fiction romp if ever there was one.

It had everything a teen 80’s movie required: a heartthrob as the lead character Barney Springboro played by Baio, a best friend played by Willie Aames, high school drama, your standard teen angst, a crazy old wise-cracking character in Scatman Crothers as Dexter Jones, a standard Eddie Deezen playing a geek character, your typical 80’s tunes and, well, lots and lots of boobs.

The basic synopsis is that Barney, a high school science nerd, gains telekinetic powers after an accident in the school laboratory, which turns his ho-hum high school existence into something a little more exciting. 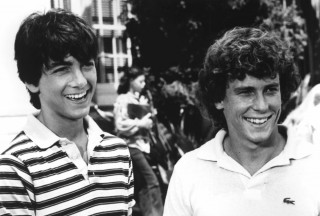 Baio and Aames together on the set of Zapped

Barney’s best friend, Peyton Nichols, has him growing weed in the laboratory in the hopes of selling it. Once he learns of his friends’ powers, he uses his friendship to get out on top, so to speak.

Felice Schachter plays Barney’s love interest, Bernadette, who is the class president and writes for the school paper. But their love affair, when it happens, is shown on the screen in all of its geeky awkwardness, which culminated in a flirting montage, to cheesy music, ending with a post coitus cigarette in the laboratory. Let us not forget that this was an R-rated movie in 1982.

There are some great lines, like when Peyton says, “Barn, sometimes life is like an onion. When you peel it, it makes you cry.” But the foremost master of the screen, who steals every scene he’s in, is Scatman Crothers as Dexter. 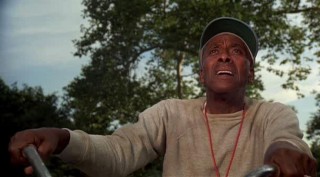 Scatman Crothers during his dream with Einstein

“Them women is trouble. First come the woman, then the whiskey… We used to call that the Devil’s double whammy,” he says to Barney who wishes he was whoring around. But the best scene for Scatman is when Barney and Bernadette have to burn the weed in the school’s furnace and Scatman opens the furnace to have a look and gets a big old whiff of cannibus. What a long strange trip it is as he dreams of riding a bike with Albert Einstein, saying at one point;

“Mr. Einstein! I’m feeling strange. Someone’s putting some shit on my mind.”
To which Einstein replies, “Sounds like too many chili dogs, Dex. You have to learn to relax!” 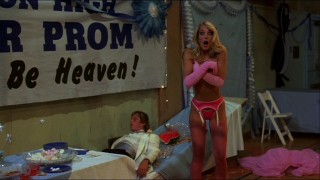 Aside from dealing with bullies for both himself and his friend Peyton, Barney uses his powers to do what any high school boy would want to do with telekinetic powers: he undoes blouses to see bare breasts, the coupe de grace being stripping half the student body, of both sexes, during the prom.

At this point, I should say that the editors of this movie seem to have decided to edit with the mantra, when in doubt, show more boobs. I’m not sure why these choose this approach, as a high school kid with telekinetic powers is interesting in and of itself, but that’s what they decided. It’s probably the reason it was an R-rated movie. But at this time, that would barely get them an PG-13. Oh, how times have changed.

The telekinetic powers are achieved through classic practical effects, with a few computer generated things, but not too much. One interesting fact about the film is that the model spaceship Barney flies around his room after being grounded is a modified Millennium Falcon from Star Wars with engines and fuselage parts from Star Trek’s U.S.S. Enterprise. 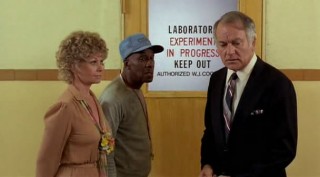 The Principal, the Coach, and a staff member

There is also the single principal looking for love and finding it on his staff, Peyton the womanizer, and a very rigged baseball game thanks to Barney’s powers.

And we can’t forget the short appearance of Eddie Deezen as one of the college geeks playing roulette at the frat party. Deezen only has a small part, but I feel like any self respecting 80’s movie – not that there are any – with half a decent casting director, would put him in the geek role. Whatever the name, he’s always the same, be it Malvin in WarGames or Sheldon in Zapped!

At the prom, Barney is asked by Bernadette to dance, who offers to take the lead when he confesses, “I can’t dance.” No, this isn’t quite a thought provoking script, but for its time, it holds up well as a piece of cheesy 80’s science fiction Americana. And by that standard, it’s something you should give a watch to. 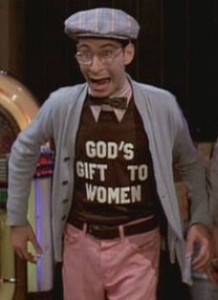 It won’t change your world, but it may give you some enjoyment during the 98 minute runtime. I mean, let’s face it, not all 80’s science fiction can be the hacker thriller of WarGames, even if the technology is dated. And that’s another thing – outside of the fashion and the music, there really isn’t much technology to date this movie.

The music is typically 80’s in sound, but the soundtrack as a whole is basically a lot of music you’ve never heard of, and that may not be without merit.

In fact, it’s a wonder they never got around to making a sequel with Baio, excepting that by that time he was a huge teen heartthrob and probably would have garnered more money to make the sequel than it cost to completely produce the original. Eight years later, they got around to making that sequel in 1990, a direct-to-video continuation titled Zapped Again!

Even still, I would recommend you check out Zapped! if only for the laughs. With some movies like this, you just can’t take them too seriously. If you need more than that, remember that Scatman Crothers is phenomenal in it!

Read the Secret File of technical information and quotes from Zapped!

Barney and Bernadette on their first night out together

Barney and Peyton after School

Bernadette and Barney on the couch

Let’s finish this up now, someone is waiting for you on that.
Even a broken clock is right two times a day.
Good clothes open many doors. Go Shopping.
More Fortunes >