Rotospective: Cool and the Crazy is almost a live-action Hey Good Lookin’ about Fidelity and Freedom

In 1994, Ralph Bakshi directed his first, and to date his only, live-action feature-length film titled “Cool and The Crazy,” a made for TV movie for Showtime’s Rebel Highway series. It starred Jared Leto and Alicia Silverstone and takes place in the 1950’s or 1960’s era. 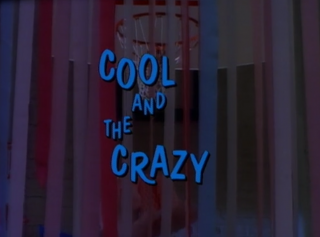 Cool and the Crazy Title Screen

Leto and Silverstone brilliantly portray high school sweethearts, Michael and Roslyn, who get married at 18 and have a baby at 19. But as the responsibilities of life pile up they find that they are not as happy as they had planned. Roslyn falls hard, listening to her friend Joannie, who’s been cheating on her husband, saying early in the movie that, “This is our lives not a dress rehearsal,” and “we have to live before we die.”

Roslyn goes out with Joannie and falls in love with Joey, who is also married and is the leader of a gang of hoodlums. Their first date is full of dancing, which back then and because of the way Bakshi directed it, becomes the foreplay to a tryst.

Meanwhile, Michael and Roslyn have their issues with their relationship and trust and their marriage as a whole falls apart. Roslyn and Joannie are best friends who apparently do everything together, even cheating on their husbands, while under the guise of their Bingo night out from child-rearing. The grass is forever greener where they are not. 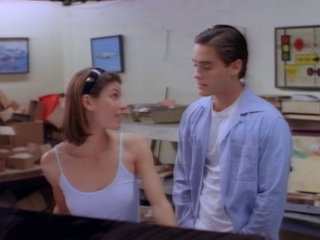 Michael and Lorraine at work

Michael blames the whole situation on Joannie, which is not without merit, but in time both Joannie and Roslyn’s marriage go off the rails. At this point, Joey is having issues with his wife, Roslyn is having her own issues, and Michael has an affair with one of his co-workers, Lorraine, who is into the beatnik and jazz scenes.

After Michael and Lorraine’s affair, Lorraine does a line of cocaine, and Michael asks what kind of dinner that is? Her response, “Expensive,” adds some levity to a movie full of serious relationship issues. Later when Jack, one of Lorraine’s writer friends, meets Michael for the first time his impressions of her are spot on.

“You’re part of hidden America, that’s lost for ideas, yet is still trying to find out where it’s at but is still holding on to old comfortable ways of American macho madness forged in Iwo Jima.”

Lorraine compounds Michael’s internal struggle by telling him, “Just because you sleep with a guy once, doesn’t mean it’s the first course to marriage.” 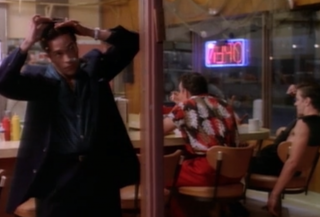 Joey and his Hoodlum Friends

Soon we revisit Joey and his hoodlums in a scene where he ignores Roslyn on a night out at a motel. Michael, after storming out returns to Lorraine who explains that she’s going to New York because it’s too stuffy in (what I assume to be) Los Angeles. Before she leaves, she alters his perception of reality once again by telling him;

“You’ve got these rules, Michael… but whose rules are they? Whose dream are you buying into? You’ve been angry for so long you don’t even know it. We’re all scared… but somehow we don’t believe that babies, TV sets, two-car garages, and McCarthy are going to make us happy. You think Roslyn did something wrong. Maybe in your world she did, but in our world she’s just fighting for some sort of freedom – freedom from slavery she can’t even explain. Don’t you see, Michael? Life is not wall-to-wall carpeting with half down and the rest of your life to pay. You and I had a good time, some tenderness… but you can’t even enjoy it because somewhere in your mind it was dirty… un-American. Figure out what you want, Michael. I’m not sure time is on your side.” 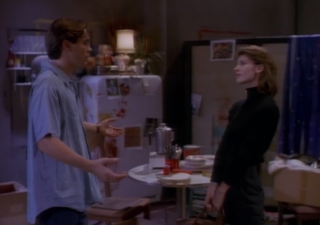 Lorraine tells Michael where it’s at

The brilliant dialogue from Lorraine and Jack would not have existed in another form of Bakshi storytelling. In many cases, because they were animated, Bakshi used internal dialogue and narrators to give that kind of exposition and commentary on situations. In this live action film, he has created characters to fill that void, and he has done it very well.

Next we find out that Joey’s life isn’t getting any easier. Michael and Roslyn get back together and it’s all set up for the ending, when Roslyn tells Joey it’s over. Joey overreacts and Michael is forced to chase him. After the chase and the inevitable yet brief fight, Michael and Roslyn decide to call it quits for good, but not before Michael promises to take care of their baby, Michael, Jr. He tells Roslyn that, “There’s more to life than what we’re doing,” and that’s something he’s learned from the tonnage that hit him when Lorraine spoke to him about rules and anger. 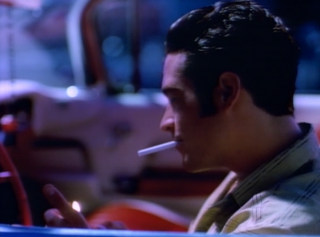 Cool and the Crazy is a great movie, and it’s one that Bakshi had been working on for the better part of almost 25 years, before it got to the screen. It started as a script he began developing in the late 60’s called “If I Catch Her, I’ll Kill Her.” The film almost came to fruition in the 1970’s when United Artists and Paramount Pictures paid Bakshi to develop the film, but ultimately decided not to produce it. Bakshi again pitched the film to other studios in the 80’s but nothing happened.

“They thought that no one was going to admit that women can—and do—cheat on their husbands. They thought it was too hot, which made no sense,” Bakshi has said about pitching the film to the studios. Then in 1993, Lou Arkoff, son of the legendary movie mogul Samuel Z. Arkoff, approached Bakshi to create a low-budget feature for Showtime’s Rebel Highway series. Bakshi again revisited his script of “If I Catch Her, I’ll Kill Her,” and renamed the film Cool and the Crazy.

I enjoyed the film because I think it shows a depth that all Bakshi scripts have, whether they are animated or not. His direction of real actors isn’t to be taken lightly, as he gets the performances and the shots he’s looking for the make the movie what it is. 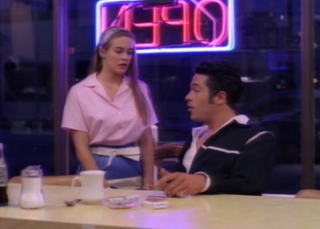 Roslyn tells Joey that it’s over

“The hyperdrive visual sense for which Bakshi’s animated features have been noted. Everything in “Cool” …seems to exist in pastels and Bakshi shoots from more odd angles than any director since Sidney J. Furie in his heyday. And the closing sequences ably demonstrate how it’s possible to present strong violence without any blood being shed onscreen. Bakshi pulls strong perfs from a cadre of youngish and largely unknown actors,” was what Variety reviewer Todd Everett wrote.

I share Everett’s sentiment and I have to wonder what people expected? For a Ralph Bakshi written-and-directed film, this has everything you have come to expect from the legendary director – only without rotoscoping and animation. This movie proves that Bakshi can direct real actors, not just pictures drawn on celluloid.

His material is heavy as always because when it came to adult entertainment, Ralph Bakshi doesn’t pull punches to dumb things down or take the cheap laugh. The camera angles and color schemes may appear to be cartoonish to some, but for me they fit into the movie as a whole, with the cars and the fashion.  Like all other Bakshi movies, the music adds to the feel of the film. 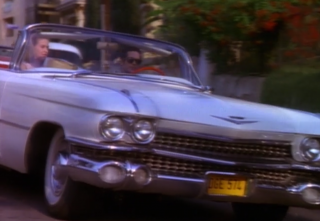 Two cars that feature in the film – Joey’s white Cadillac and Michael’s baby blue Chevrolet – are things of beauty. Both appear to be late 50’s early 60’s models and feature not just as transportation, but as the main attraction for the penultimate car chase between Joey and Michael.

The stars of the film, Silverstone and Leto are fabulous and were both relatively unknowns at the time of Cool and the Crazy’s release. This was before the both of them made their big starts; Silverstone had been featured in Aerosmith music videos, but Cool came out a year before her breakout performance in Clueless, while Leto was just starting to get recognition on the short lived “My So-Called Life” as Jordan Catalano. 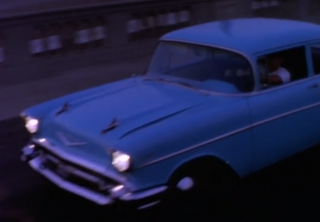 Overall, Bakshi’s first and only full-length feature live action film is wonderful. If he had more opportunities to do live-action cinema, I’d pay to see it. I’m not sure at this point if he has any interest, as Hollywood and Bakshi don’t see eye to eye much these days, although they never really did. I, for one, don’t think he needs to be pigeon-holed into animation, but that’s my opinion. Watch Cool and the Crazy and decide for yourself.

Sure, he shoots it in what can only be described as cartoonish angles and lightning, but that’s because it fits his style of storytelling and not because it’s the only thing he knows. After all, he was able to shoot this film and get performances out of the actors that really hold up well. In fact, it’s hard to watch this film and not think about Hey Good Lookin’, because the characters and the time period overlap in places. But it still stands on its own and it’s a Bakshi classic none-the-less.

Check out the other classic Bakshi films in my Ralph Bakshi Rotospective series.

Cool and the Crazy The Happy Couple

High School Sweethears at the Center

A double Wedding begins Cool and the Crazy

Silverstone and Let as the Newlyweds

Michael and a pregnant Roslyn

Micheal and his son Cool and the Crazy

Michael’s Workshop Cool and the Crazy

Joey and his hoodlums Cool and the Crazy

A still from the Diner Cool and the Crazy

Affairs can happen in Cars

A Still from the Penultimate Scene in Cool and the Crazy

A still from the credits photo montage Cool and the Crazy 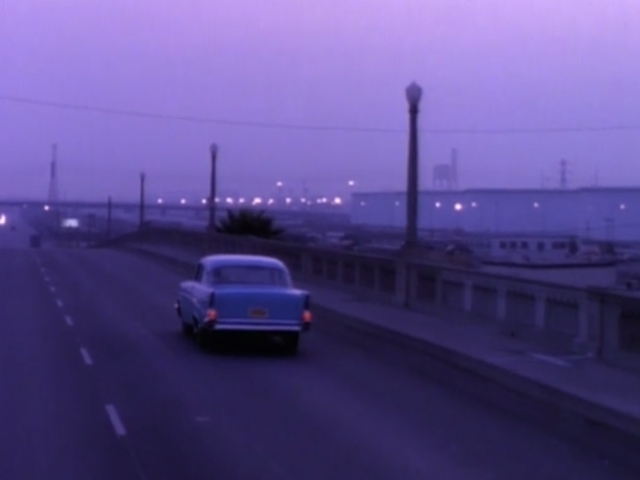 Michael does drive into the sunset

Read the Secret File of technical information and quotes from Cool and the Crazy.

Even the greatest of whales is helpless in the middle of a desert.
Today it’s okay to make a few choices by going with your instincts.
Look forward to great fortune and a new lease on life!
More Fortunes >