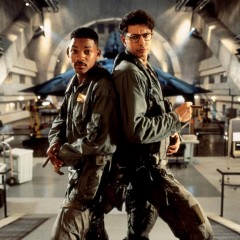 Remember that time when Will Smith and Jeff Goldblum saved the world together?

Of course you do, because Independence Day was the highest grossing film of 1996. In case you’re wondering, it beat out Twister, Mission: Impossible, Jerry Maguire, and Ransom, which, with ID4, make up the Top 5 highest domestic grossing movies of that year.

To clear the air before I continue, one of the most common misconceptions about Independence Day is that it was a Michael Bay film and with good reason. In hindsight, it looks and feels exactly like a standard Bay picture. It was, in fact, directed by Roland Emmerich who had previously done Stargate (1994) and would go on to do Godzilla (1998), The Patriot (2000), and The Day After Tomorrow (2004), to name a few. 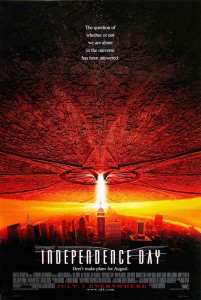 With that out of the way, let’s get to the movie itself.

It all starts with shots of Apollo 11’s moon landing site – the flag, the footprints, the base of the lunar module, and the plaque, accompanied by the now famous audio of Neil Armstrong’s first words on the moon – before it all gets covered in shadow by an alien craft. Which is then picked up by a Search for Extraterrestrial Intelligence, or SETI, outpost.

Of all the implausible things about this movie, this is the most glaring. SETI and the government pick up the alien ship as it passes over the moon, but that’s too close. Two years later in 1998, Armageddon would get it a little less wrong, with the satellites picking up the rogue asteroid heading for Earth as it passed through the Asteroid Belt. Not that it would have changed the movie much, but seriously, even for the technology we had in 1996, it should have been picked up much sooner than passing through the Lunar orbit.

Next up are our character introductions beginning with President Thomas Whitmore, played by Bill Pullman. You know, just a typical morning in a White House with abysmal approval ratings, to which President Whitmore says, “Isn’t it amazing how quickly everyone can turn against you?” 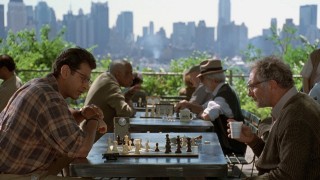 Following the President’s introduction we meet David Levinson, a brilliant MIT graduate and environmentalist who is working for a cable company, played by Jeff Goldblum. We first meet him playing chess in the park with his father Julius Levinson, cast as the loveable Judd Hirsch. Back at the office when trying to fix the signal interference caused by the alien space craft, David uncovers, within their own satellites, a code the aliens are using which he deciphers as a countdown.

The last main character introduction is Captain Steven Miller, portrayed by Will Smith, where we learn he would one day like to be an astronaut.

Now that we know everyone, we can move on. With the alien ships now nestling over cities world wide, one hilarious newscast from Los Angeles states, “Once again, the L.A.P.D. is asking Los Angelenos not to fire their guns at the visitor spacecraft. You may inadvertently trigger an interstellar war.” Sometimes, levity in an doomsday movie can be a beautiful thing, and for some reason, I just love the idea that in Los Angeles, people would just start shooting at the alien ship.

David, his father, and his ex-wife in the Oval Office – Independence Day

David decides to go to D.C. where his ex-wife, now working for President Whitman, is at the White House and he enlists the help of his father to get him there. Of course, they are the only people going into D.C., while everyone is getting out, but it is here that we learn David took a swipe at and got into a fight with Whitman, who was then a Senator. All for the love a good woman.

The next part of the movie features my favorite bit character in the film, Captain Jimmy “Raven” Wilder played by Harry Connick, Jr. as part of Captain Miller’s unit, the Black Knights. It’s unfortunate to see him die, but his character really brings out the laughs in this movie, which says something because Will Smith’s Captain Miller has some great lines. 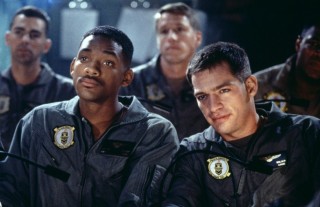 Will Smith and Harry Connick, Jr in Independence Day

But Harry with his “kick the tires and light the fires” line plus his impersonation of the Rev. Jesse Jackson – “Why we’re on this particular mission we’ll never know. But I do know, here today, that the Black Knights will emerge victorious once again.” – are both brilliant examples of why Connick isn’t just another singer-turned-actor.

Back on Air Force One, the President and his staff plus David and his father have a discussion about Area 51, in which the weasel for a Secretary of Defense, says it exists. This is of course after all those models got blown to bits, more on that later. Once at the restricted base, President Whitmore asks, “I don’t understand, where does all this come from? How do you get funding for something like this?”

The answer is nothing more than great writing for Judd Hirsch’s character, who as Julius replies, “You don’t actually think they spend $20,000 on a hammer, $30,000 on a toilet seat, do you?”

And on first meeting, the head of research, Dr. Okun, says, “Mr. President! Wow! This is… what a pleasure. As you can imagine, they… they don’t let us out much.” This could very well be the most understated statement of the whole movie!

So, aliens have come to Earth. They’re hostile and Area 51 does exist. Do we understand their technology? Not really. Can we penetrate their defenses? Nope. Do we know why they came? Yes, to kill us and move on. All hope is basically gone. So let’s flash to a drunk David on the floor, talking to his father, where he get’s the idea to give use a computer virus to disable the alien defenses.

The plan is researched and explained that Will Smith and Jeff Goldblum are going into space to destroy the alien mother ship and save the world. 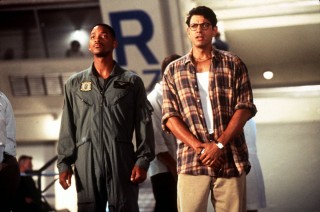 Hiller and Levinson getting ready to save the world – Independence Day

But before they take off, two things happen, and both are important character-building moments. Hiller marries his girlfriend and David talks to his ex-wife, where she states, “Now he gets ambitious.” That makes me think of David Levinson as an older Michael Gold, the character played by Goldblum in The Big Chill, who is always looking for the next big thing. That connection could just belong to me, but there it was, right in my head as I watched that scene.

Before takeoff, there is an “oops” as the control directions were backwards and the riffing between Goldblum and Smith from here on out is top notch. In fact, producer Dean Devlin said that well over half of the dialogue in the scenes Jeff Goldblum shared with Judd Hirsch and Will Smith was improvised. It may explain why Goldblum, Smith and particularly Hirsch have all the best lines.

Following their takeoff, the President addresses the rest of the troops with one of the greatest fictional Presidential speeches in cinematic history. (Maybe, that’s a bit exaggerated, but it’s great writing none-the-less.) The speech was filmed on August 6th, 1995 in front of a hangar that once housed the Enola Gay, which dropped the atomic bomb on Hiroshima exactly 50 years earlier on August 6th, 1945.

“Good morning. In less than an hour, aircraft from here will join others from around the world. And you will be launching the largest aerial battle in the history of mankind. ‘Mankind.’ That word should have new meaning for all of us today. We can’t be consumed by our petty differences anymore. We will be united in our common interests. Perhaps it’s fate that today is the Fourth of July, and you will once again be fighting for our freedom… Not from tyranny, oppression, or persecution… but from annihilation. We are fighting for our right to live. To exist. And should we win the day, the Fourth of July will no longer be known as an American holiday, but as the day the world declared in one voice: ‘We will not go quietly into the night!’ We will not vanish without a fight! We’re going to live on! We’re going to survive! Today we celebrate our Independence Day!'” 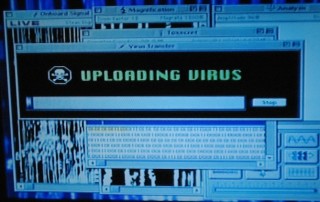 With the virus delivered it’s time to take them down. And of course, let’s spread the word with Morse code.

And that’s it, we win! Saved from annihilation and probable extinction by Will Smith Jeff Goldblum and a cast of other characters. The movie is just three days long and was shot in just 72 days and the results speak for themselves. Not bad work for a film that became the blockbuster hit of the summer of 1996.

Before I move on… Think about that. It takes place over three days. July 2nd, first contact and the first wave of attacks. July 3rd, aftermath of the first destruction, a failed counterattack, more destruction, a failed nuclear counter attack and the whole business at Area 51. July 4, late at night or early in the morning David gets the idea for computer virus, the plan is put into effect, the speech, and the win, all in time for afternoon fireworks. It’s basically the blockbuster equivalent of a short story. 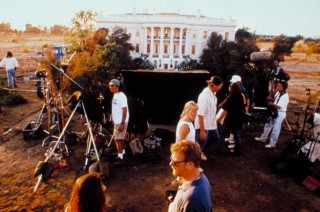 White House miniature before it was blown up for Independence Day

I mentioned earlier that I would get to the models (or miniatures). For 1996, in a post Jurassic Park world, where practical effects were starting to die off as the processes and realism of CG became more prevalent, it is of note that Independence Day holds the record for most miniature model work in one film. It is estimated that more miniatures were used in this film than in any other two films combined. And since computer-generated graphics have advanced since 1996, this is a record that will probably stand forever. 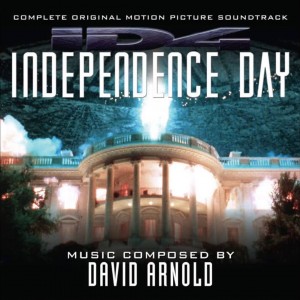 The score of this film, composed by David Arnold, is phenomenal and should stand at the top of many lists. It fits well throughout the whole movie and has an emotion to it that is sometimes lacking in big summer blockbusters, where effects and big names at times seem to overshadow any other part of the movie or movie-making process.

I know the film is old and at times dated, but I’m still a bit appalled at the ratings it has online; 6.9/10 on IMDb, 60% on Rotten Tomatoes, and 59% on Metacritic, although it does have 4 out of 5 stars on Amazon.

I think this movie is great. The bit players I didn’t mention who make up the rest of the cast  are phenomenal; Mary McDonnell (now of the Battlestar Galactica reboot fame) plays First Lady Marilyn Whitmore, Robert Loggia as General William Grey, Rand Quaid as the not-quite-all-there Russell Casse, Vivica A. Fox as Jasmine, James Rebhorn as Secretary of Defense Albert Nimziki, Adam Baldwin (of Firefly fame) as Major Mitchell, and even Dan Lauria (the dad from The Wonder Years) plays an unnamed Commanding Officer. 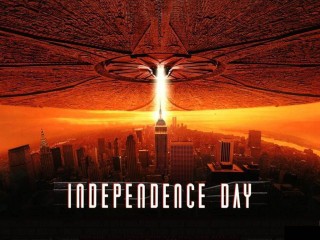 This movie has it all: an amazing cast, great dialogue, humor, a balance between practical and computer generated effects and explosions, and so much more.

It was a summer blockbuster in 1996 and has since become a July Fourth tradition on network television. This movie is how we celebrate our Independence Day.

Independence Day’s long awaited sequel Independence Day resurgence is hoping to capitalize on the success of its predecessor. With Emmerich back to direct and a few of the same writers, plus Goldblum, Hirsch, Pullman and Fox back on board, it should be one wild ride.

Read the Secret File of technical information and quotes from Independence Day.

Whoever wants to reach a distant goal must take small steps.
Good clothes open many doors. Go Shopping.
Let’s finish this up now, someone is waiting for you on that.
More Fortunes >