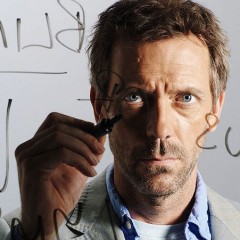 Dr. Gregory House, was a brilliant character. I enjoyed watching the show, not because I particularly like medical dramas, but because I like mystery and because like House himself state in the pilot, “everybody lies.”

The way House approached his cases, the way he dissected obstacles and politics, just the way he thought was, in my humble opinion, a very refreshing view of problem solving. I approach problems in a similar fashion. In a way, we all want to be House. Not because we want to be assholes and push loved ones away, but because we’d all like to be brilliant at deduces the details of problems in order to solve them more efficiently.

The show as a whole was as great an homage to Sir Arthur Canon Doyle’s Sherlock Holmes character that only the mention of that comparison is needed. Holmes, as brought to life recently, by Mr. Tony Stark himself, Robert Downey, Jr, is the only apt fictional character for comparison.

If anyone out there remembers reading Sherlock Holmes, it’s much more detailed oriented than the new movies let on, which is saying something. No, spoilers here, no opinions on the final episode, just one statement…

Dr. Gregory House, M.D. is a character who, although fraught with faults, is someone to which we can all learn something from. I myself learned that I approach problems more like House than the average person. I am also driven to finish the task and move on to the next thing as well. I can’t say I learned much from House, but I did learn about myself and what more could you ask of a television show than that?

The path of life shall lead upwards for you.
Sharing little joys offer great hope to others.
Fame and fortune are coming your way.
More Fortunes >