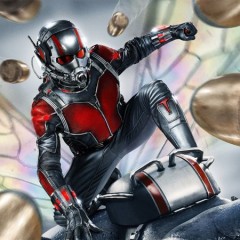 My knowledge of Ant-Man, Hank Pym, Scott Lang, and Wasp doesn’t come from reading the comics, but I knew about them in a way familiar to many geeks: from conversation and osmosis from friends who do read the comics about the pint-sized powerhouse.

At best, I think I’ve read one or two issues. But I was still excited to see the character on the big screen, making his Marvel Cinematic Universe debut.

And Marvel did not disappoint.

What they did was create a great movie with an origin story that also has deep ties to the Marvel Cinematic Universe of today and yesterday. Ant-Man is connected from Agent Carter to Agents of S.H.I.E.L.D. and to other future and current MCU movies. It is a masterpiece of not just storytelling, but world maintaining, as it continues to push the MCU forward while paying homage to its past. 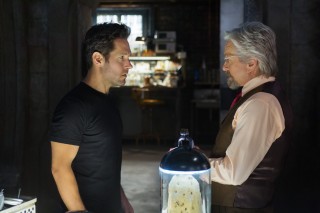 Michael Douglas as Hank Pym, the original Ant-Man, is fantastic, while Paul Rudd as current Ant-Man Scott Lang is equally fantastic. The enemy is Darren Cross who is also Yellowjacket, a former Hank Pym underling looking to make his former mentor proud. There are other enemies in play as well, as both HYDRA and SHIELD are painted with a similar brush. It’s nice to know that Marvel isn’t always going to make SHIELD the automatic good guys in any given story.

This film is about mentors and fathers, family and technology. It covers a lot of ground and a wide spectrum with grand themes.

And do you know what? Marvel’s clearly breaking away from the industry standard of trailers that give away too much. Because sitting in that dark theater, after having seen all of the trailers countless times, I was still surprised. And how thankful I was to be surprised.

The movie starts out with a meeting at the not-yet-completed Triskelion, which was destroyed in Captain America: The Winter Soldier. In this meeting, Hank Pym, Peggy Carter, Howard Stark, and Mitchell Carson discuss the technology behind the Ant-Man suit. I enjoy this scene because it gives us a mere glimpse at a much more complicated MCU history.

First, Agent Peggy Carter is still working in SHIELD in the 1980’s, when the meeting takes place, and second, I would wager an educated guess that the Triskelion is a Stark design. There is no bigger history lesson than knowing more about Carter and the elder Stark, as it related to the history of SHIELD and by extension the MCU.

Falcon’s appearance at the New Avengers training facility in upstate New York is equally impressive because it ties in the end of Avengers: Age of Ultron. But the Avengers are with SHIELD and as such, they aren’t necessarily the good guys here. The proof is in the writing as there are quite a few quips and put-downs thrown the Avengers way throughout the movie. 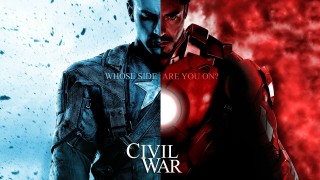 And for the love of Thor stay for the end credits. This is Marvel, they’ve got a great track record setting up future films in their predecessors. And when I say end credits, I mean after the scroll.

With the end credits scene plus all of the announcements of the casting for Captain America: Civil War, it makes me really hope for some great verbal banter between Scott and the Avengers, particularly Tony Stark. But for that we’ll have to wait and see.

For now, we are presented with a great movie that no one seems interested it. It had one of the smaller Marvel Thursday/Friday openings, but it doesn’t matter. It’s a great movie that will make bank for Marvel based upon it being made with the smallest budget of any Marvel movie thus far. I also think it is more of a Phase One Marvel film than a Phase Two film, at least it has that feel.

And unlike last year’s improbable Guardians of the Galaxy success, this year has already been full of great blockbusters, including one of Marvel’s own in Avengers: Age of Ultron, which was dethroned by the current king of summer blockbusters, Jurassic World. 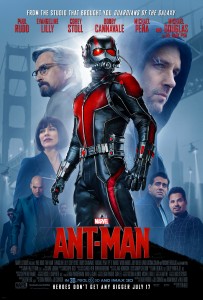 Even Marvel can’t hit a home run every time out, but perhaps they did. Of course it won’t do nearly the numbers Ultron did, but having seen both Ant-Man and Ultron once, maybe the better movie is not the ensemble one with the huge, already-existing cinematic fan base.

Ant-Man has great writing and story which is what I expect from a Marvel origin story and I wasn’t let down. I thoroughly enjoyed myself and all of the Easter eggs I found and those I’ll find once it’s in my own personal movie collection. But this is not just an origin story, it is two origin stories and a passing of the torch story all rolled into one.

It’s not time to panic. It’s time to go to the theaters. If you’re so inclined, wait until it gets released for your home enjoyment pleasure, but you will want this one for your collection guaranteed. It takes a cue from the great Phase One origin movies like Iron Man and Captain America and tweaks the formula towards the unconventional.

Not sure what I mean? Seriously, go see this movie. You will not be let down.

Read the Secret File of technical information and quotes from Marvel’s Ant-Man.

Whoever wants to reach a distant goal must take small steps.
Nothing in the world can take the place of persistence.
Let’s finish this up now, someone is waiting for you on that.
More Fortunes >