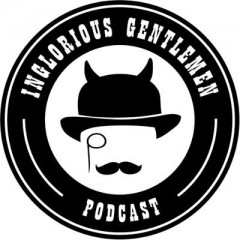 Introducing Lord Harry of Palm, that’s me! Or at least that’s me when I appeared on the Inglorious Gentlemen Podcast.

It’s “an eye opening podcast of gentleman discussing topics that always turns south into the dark side of men.” But the purposed of this post is to explain how I became Lord Harry of Palm and to divulge the wonderful time I had with the Gents of Inglorious Gentlemen.

It was an ordinary Sunday, like any other Sunday. I was done with my writing and listening to a podcast, while tweeting along. That Sunday I was listening through the 7 Days a Geek archives and took a break from The Angry Ginger, The Kilted One, McBlizzard, The Angry Oz, and Bacon; to listen to a brand new Diamond Minds episode featuring Diamond Dave, Diamond Mind and another Maier Chris Maier.

Later that evening, I received an encrypted message from Diamond Dave that I was welcome to join that night’s recording of Inglorious Gentlemen, if I was interested. So I asked when they were recording. Dave told me I had 20 minutes and I said yes. I mean, of course I said yes, how could I possibly decline an invitation from the Inglorious Gentlemen?

Now here’s the twist… There are many incarnations of the Inglorious Gentlemen. And although I knew all of the people involved, I had yet to hear an episode. So I had very little to go on, and didn’t even know who I would be recording with. And who was on that show with me? Why, it was all three Maiers, whom I had listened to earlier that day, and the extremely talented Doug LeMesurier. 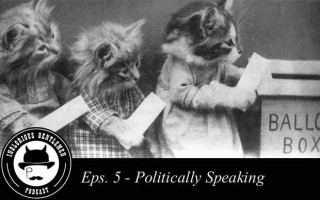 While I am aware that at least one Maier has been present for each show, I was excited to talk to the three whom I had just listened to. And that’s the best part about being a podcast guest. It’s not like talking to strangers, at least for the guest, it’s more like an interactive podcast that you can, well, interact with.

On to the main topic of the evening, which I learned about on air, politics. Now, I haven’t actively payed attention to politics since college, but I surprised myself with the ridiculous amount of current political minutia I have gathered through the osmosis of social media.

All in all, it was a honor to be considered at all and I had a blast. After all, I’ve heard them all on their other respective podcasts, so you can be sure that Inglorious Gentlemen is now in my rotation and it should be in yours too!

Courtesy is the password to safety.
Nothing in the world can take the place of persistence.
The path of life shall lead upwards for you.
More Fortunes >