Thanksgiving Movies to be Thankful for… 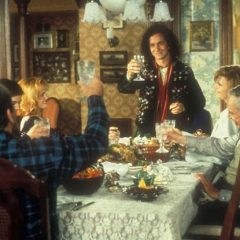 It is November and All Hallow’s Eve has come and gone, but before you start with all of the December Holidays preparation, don’t pass over the November Holiday that is often overlooked when it comes to movies. Yes, Thanksgiving has it’s share of movies, maybe not completely based on the holiday, but it’s in there.

Now to define what a “Thanksgiving movie” is, I’m just going to say Thanksgiving is a part of it. It doesn’t have to be completely based upon the holiday, some for example just have a scene or two around the table, while some are even more loosely related. But with this list, I’ve relied a bit heavily on the internet and within my judgement these all make the list for me.

A Charlie Brown Thanksgiving (1973) & This Is America, Charlie Brown (1988) – Can Americans celebrate any kind of colloquial holiday without Charlie Brown? No. I don’t think we can.

Alice’s Restaurant (1969) – One of the traditions that my mother and father have passed down to me is listening to “Alice’s Restaurant” by Arlo Guthrie on Thanksgiving Day. This movie is based on the song of the same name and Arlo plays himself.

The Big Chill (1983) – I’ll find any reason I can to put this movie on any list. It’s arguably one of my favorites, but it’s here because it contains a Thanksgiving-like turkey dinner and football. (It’s also a great movie I’ve already written about.)

Brokeback Mountain (2005) – Yes, there is a massive movie-esque turkey dinner in this film. And if you didn’t like the film, may I suggest listening to The Kilted One from 7 Days A Geek give the famous “I can’t quit you” Speech. (He does it every so often.)

Grindhouse (2007) – Why is this here? Because of the fake trailer included in the film for Eli Roth’s THANKSGIVING. Because what Thanksgiving needs is more gravy, right?

Grumpy Old Men (1993) – Lemmon, Matthau and a host of other talents like Ann-Margret, Burgess Meredith, Daryl Hanna, Kevin Pollak and a music score by Alan Silvestri. If you haven’t seen it, you should and if you have, it may be time to revisit.

The Ice Storm (1997) – Do you know what Thanksgiving needs? Angst. Well, maybe not angst but a key party couldn’t hurt? Or maybe just some infidelity for the holidays. This drama has a stellar cast and is in a class of its own when it comes to tragic comedies.

Planes, Trains and Automobiles (1987) – This is one of the few Thanksgiving movies that actually comes to mind for most people. It’s Steve Martin and John Candy with director John Hughes. I’ll stop because “The last thing I want to be remembered as is an annoying blabbermouth.”

Scent of a Woman (1992) – Come on people, Pacino is great in the whole movie and there is an awkward Thanksgiving dinner scene that will make your dinner seem normal? (Am I helping?)

Son in Law (1993) – It’s a guilty pleasure for a certain demographic and just a pleasure for another, but it’s early Nineties Pauly Shore when he was still bringing the funny!

Nothing in the world can take the place of persistence.
Let’s finish this up now, someone is waiting for you on that.
Whoever wants to reach a distant goal must take small steps.
More Fortunes >