Christmas in Tattertown aired on Nickelodeon on December 21, 1988 as the first original show created for the network. It was the brainchild of Ralph Bakshi, based on a comic strip called “Junk Town” that he came up with in high school.

It was supposed to be the start of a 39-episode series for Nickelodeon called “Tattertown” to be aired in 1989. The project was abandoned, and this 30 minute Christmas special is all that remains. It was aired seasonally from that first year in 1988 through the holiday season of 1992, but hasn’t seen airtime since. 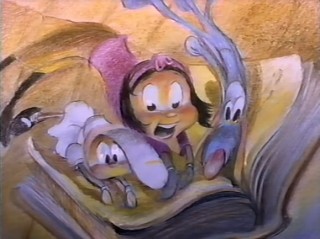 Christmas in Tattertown is the story of Debbie and two of her toys that get transported to Tattertown through a magic book. Because this one-shot was supposed to be a pilot it spends more time developing characters than a normal one-shot would. And who could blame the writers; they thought this was the start of a series.

The show starts with an anthropomorphic saxophone, named Miles, who acts as the show’s narrator, first saying, “Let me tell you a story about a girl named Debbie…”

Miles then introduces and explains Tattertown.

“Hey, my name’s Miles, and I’m just doing what I like best: keeping time with the Blues…”

“Welcome to Tattertown. This is the place where everything you’ve ever lost winds up. And I do mean wind up.”

“Tattertown is the Elephant’s Graveyard for junk, where all forgotten objects come to rest. But as you can see, nothing rests around here.” 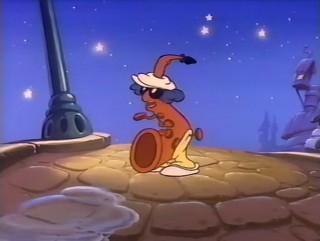 Tattertown’s Narrator is Miles the saxophone

“An amazing thing happens to some of the things that find their way here… They become alive.”

“Yessir, Tattertown’s a cool gig for everybody.”

Debbie entered Tattertown with a stuffed dog and a stuffed Little Miss Muffet doll. Muffet runs away from Debbie after becoming alive, and that’s the beginning of the story.

Now the concept of inanimate objects springing to life is far from foreign in cartoons. It also isn’t foreign to Bakshi pieces as the beginning of Hey Good Lookin’ is a conversation between a garbage can and a pile of garbage. While that conversation was much more adult, it is part of the Bakshi lore and deserves to be mentioned considering what Tattertown is.

Aside from the connection to “Hey Good Lookin'” it also has some ties to Cool World, specifically when you compare Sidney the Spider to Nails. 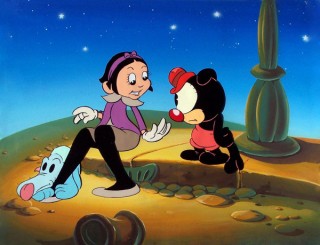 Back to the story. After a chase between Debbie and Muffet, in which Muffet gets away, Debbie is fixing one of the toys named Harvey when she brings up the fact that she received Muffet as a Christmas present. Harvey doesn’t know what Christmas is.

Debbie replies, “You mean you don’t know what Christmas is? With all this junk lying around here, you must have seen some Christmas stuff.”

And Harvey responds somewhat hurt, saying, “It ain’t junk, it’s family,” and puts his hat on his heart on the word “family.”

Next up is a look at The Spider, one of the more evil characters in Tattertown, as he’s terrorizing a story, saying “Stop! Yas little meddlers, I’ll fix all yas wagons!” But his rampage is interrupted by Muffet, who declares herself as Muffet the Merciless.

Now since Debbie has had her short introduction to Tattertown, it’s now time for Muffet to understand where she is. And our narrator Miles steps in after Muffet asks, “What kind of a crazy place is this anyway? Can’t a person be evil in peace?” 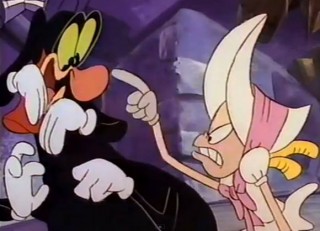 Sidney and Muffet – Christmas in Tattertown

Miles then explains “The Deadster Zone; hangout for war toys, TV sets, and other unsavory characters…”

And so we have our two main plot points for this special: Debbie, who is trying to teach Tattertown about Christmas and Muffet who is attempting to not only take over The Deadster Zone, but Tattertown as well.

Muffet isn’t exactly happy with her minions. Upon seeing the residents of The Deadster Zone, she says “I’ve seen Jell-O with more backbone than these guys.”

Debbie isn’t having an easy time in Tattertown. “Somebody do something, Debbie’s leaking…,” whines Harvey as a frustrated Debbie is crying.

And so Debbie explains that “Christmas is the most wonderful time of the year… Christmas is caroling in the snow and candy canes, decorating the tree, and on Christmas morning we run downstairs and open our presents.” And while the decorating the tree is shown on screen, a very distinctive moose is shown on screen for a moment… I’m not sure if this is a direct dig at Bullwinkle J. Moose of Rocky and Bullwinkle fame or not, but the similarities are there. 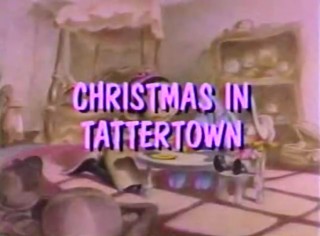 The Title Card to Christmas in Tattertown

In The Deadster Zone, Muffet describes the other side of Christmas from the toys’ perspective. “Christmas is being wrapped and unwrapped and hugged and squeezed and yuck!” Muffet then sends her spies to see what kind of a Christmas Tattertown is going to have, saying that “the war machines are almost ready.”

The next scenes are so classically Bakshi, they belong in Bakshi 101.

The first is the books and comics in the comic books store, as they come alive in classic cartoon fashion with their pages playing out what’s written on them, with a splash of Bakshi’s love for jazz playing behind the scene. The second is Herbert Tannenbaum, the Jewish evergreen tree who owns the comic book shop!

Debbie tries to convince Tannenbaum to be their Christmas tree, and he only agrees when learning there’s no competition… “I’ve always wanted to be a monopoly!” he exclaims.

The next few scenes are beyond classic Bakshi; they are classic Nickelodeon and a precursor to the Ren & Stimpy sort of adult humor found in some of the network’s original cartoons. 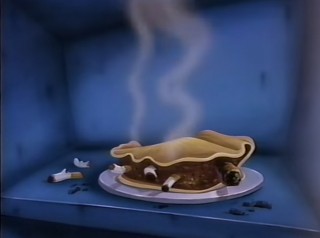 Muffet missed a chance to eat her favorite cuisine, tobacco pie, which is animated in a style similar to that of what would be seen on Ren & Stimpy later on. Then Muffet, upon learning that her spies have gone to the other side says, “Let me rest my head for a moment, it’s so hard living with these lower lifeforms.”

But there’s a cross-dressing joke, when the dresser outs Sidney the Spider saying to Muffet, “He’s always dressing up in your clothes when you’re not home.” I wouldn’t say this is high brow comedy, but it certainly isn’t for kids.

Then Muffet dresses Spider up as a reindeer and herself as Santa, before taking her assault to those “Tattertown Twits.” “Muffet Claus is comin’ to town!”

“Christmas isn’t about chopping down trees or even about gifts. It’s a very special time, once a year, when all the people stop working, playing, yelling, or fighting…” But Debbie still can’t get Tattertown to understand. Then, Muffet opens her airborne assault, shouting, “Let’s take Tattertown while they’re in the Christmas mood…” 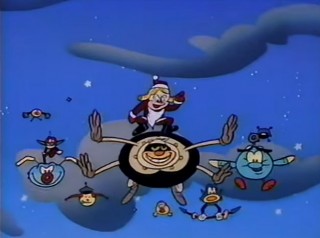 During the siege St. Nick comes and Muffet’s minions start to attack, while Muffet goes after Santa. During the dogfight, Santa disappears and Muffet says, “I’ll attack solo, what do I need an army for?”

Meanwhile, Debbie puts on Bing Crosby’s “White Christmas” to make everyone understand the spirit of the holiday, and it works. It starts to snow and Muffet ends up in jail. That’s where the tale ends.

Like many cartoons, the animated tale itself has a happy ending, but the story behind Christmas in Tattertown doesn’t.

Why was the show only a one-shot? What happened to disrupt the contracted 39-episode series? Well, it was set up well enough. It had a great name behind it in Bakshi, and it came out on the heels of Who Framed Roger Rabbit which also debuted in 1988. In fact, it’s that film’s success that Bakshi credits with getting this series greenlit to begin with.

But one of Bakshi’s other projects got in the way.

An episode of Mighty Mouse: The New Adventures called “The Littlest Tramp” brought Bakshi back to the forefront. In it, he portrayed Might Mouse sniffing the remains of a flower. Although the episode initially aired without incident, the American Family Association alleged that the sniffing flower was depicting cocaine use, and in the end, Bakshi not only lost Might Mouse: The New Adventures, but his deal with Nickelodeon to do Tattertown.

Christmas in Tattertown was ripe with talent both on and behind the animation. Voice actors such as Charles Adler, Jennifer Darling, Keith David, Arthur Burghardt, and Patrick Pinney all had and continued to have outstanding careers and resumes. Teleplay Writers Tom Minton (Animaniacs, Tiny Toons, Phineas and Ferb, and more) and Jim Reardon (The Simpsons, Wall-E, and Wreck-it Ralph) have gone on to stellar careers. Even Executive Producer Tom Klein, who worked with Bakshi on Mighty Mouse: The New Adventures, went on to work on FernGully and The Simpsons. 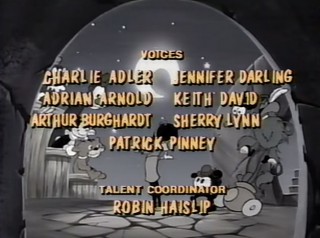 The Voices of Christmas in Tattertown

That Bakshi worked with some of the best, or that he found them before they went on to more success, shouldn’t surprise anyone. He’s always had an eye for talent, beyond his own creative and talented nature for animation.

Charles Solomon wrote a review of Christmas in Tattertown for the LA Times, concluding that “Bakshi has always been a fan of the rubbery, goggle-eyed cartoon characters of the early ’30s, and “Tattertown” appears to be his homage to the films of that era.”

And Erin Snyder agreed in her piece on Christmas in Tattertown saying, “It’s basically a love letter from Ralph Bakshi to the largely forgotten animated works of the early 1900’s. It’s got a lot of issues, but it’s a fascinating piece on its own.” And she’s correct on all counts.

It is a love letter to the animation that inspired Bakshi at the beginning. It’s also a glimpse of the things to come, especially on Nickelodeon, when you compare it to Ren and Stimpy. 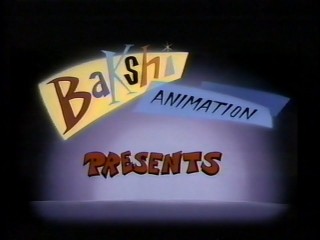 And Bakshi himself has said as much. Back in 1988 he told Animato! Magazine, “Tattertown is a strange world. What I wanted to do was make something where old and new animation could clash head on, visually, stylistically, and in attitude. Tattertown is where old cartoon characters live side by side with new cartoon characters, and they have a hell of a time relating. The old characters go all the way back to Paul Terry’s Farmer Alfalfa. Oswald the Rabbit is there and Bosko. And they’re right up against characters who are modern and can’t move very well and have superior attitudes.”

All in all, this is a Bakshi production not just in name, but in style and substance to boot. It was a pilot turned one-off Christmas special and has since been left to the devices of time.

Will it ever return? That’s doubtful, but you never know. Ralph Bakshi is full of surprises, though at this point, I would guess that he’s much more focused on the future than revisiting the past.

A difference, to be a difference, must make a difference.
Nothing in the world can take the place of persistence.
You are interested in higher education, whether material or spiritual.
More Fortunes >