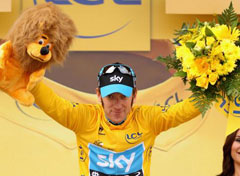 The 99th Tour de France completed it’s 3,496.9 km journey through Belgium, Switzerland and France, today. History was made with British rider Bradley Wiggins of Team Sky taking the final maillot jaune (yellow jersey) being the first of his country to do so, his teammate Chris Froome joined him 2nd on the podium, also a first. Another teammate of Wiggins, Mark Cavendish, also made history with his fourth straight victory on the Champs-Élysées.

There was doping in this tour, it seems to be a common occurrence these days. During the first rest day Confidis rider Remy Di Gregorio was arrested and RadioShack Nissan Trek team’s Frank Shleck (3rd place in the 2011 Tour de France) left the tour during the second and final rest day after testing positive for a banned diuretic.

Now, on to my list of the Top 5 Non-Doping Moments from this year’s Tour de France:

5) There was much drama created in this year’s tour due to a multitude of crashes. It seemed as though no one was safe! 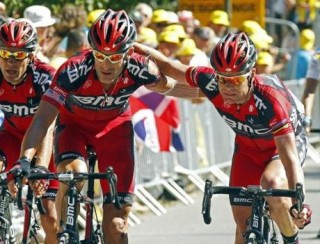 4) George Hincapie, the 1st Lieutenant to 9 Tour de France winners, all 7 of Lance Armstrong’s victories, as well as Alberto Contador in 2007 and Cadel Evans last year, finished his 16th and final Tour de France by leading the peleton onto the Champs-Élysées.

3) The future is bright! Peter Sagan is a hulk! Even more fitting due to the face that he won Stage 1 of his first Tour de France, grabbing the Green Jersey and not looking back, holding it all the way into Paris. Also, there is a reason for Americans to be excited, Tejay van Garderen in his 2nd tour, won the White Jersey, holding on to it for all but stages 7 and 8, and finished 5th overall.

2) What can I say, Englishmen Bradley Wiggins and Christopher Froome need to be on this list. Wiggins dominated the Time-Trials and Froome, who at times looked stronger in the mountains than Wiggins sacrificed for team and country. Class acts all around, well done, gentlemen! 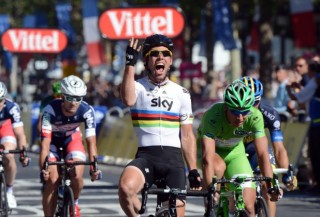 1) Mark Cavendish, period. No he didn’t win the Green Jersey, but he did win his 23rd stage in the Tour de France, by smashing all of his opponents, while in World Champion colors to win his 4th straight on the Champs-Élysées.

As a bonus, I’d like to toast Team Sky! Let me count the ways, 1 – during the sabotage of tacks during Stage 14, Wiggins and his teammates slowed the race down, to allow Evan’s to catch back up (he had 3 punctures), 2 – Sky’s cyclists lead by Chris Froome, slayed it all out in the mountains to decimate the field for Bradley Wiggins and 3 – during the last stage team leader Bradley Wiggins, in his Yellow Jersey as leader of the Tour, help to lead out Mark Cavendish for an eventual Stage Victory! That’s teamwork and honor and sportsmanship. I hope you were watching Mr. Contador… (He returns from his suspension for the 2012 Vuelta a España, next month, touted as “the Most Controversial Man in Cycling.” We’ll see about that…)

Things are turning for the bright side.
Today it’s okay to make a few choices by going with your instincts.
Sharing little joys offer great hope to others.
More Fortunes >