The Reigning Lunatic: A Flattering Review for the Medieval Miniseries from the Kingdom of Welchmania 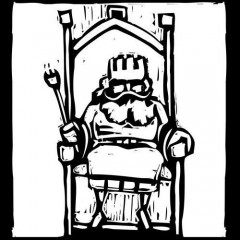 On August 26th, 2015 “The Lunacy Beginneth” when The Reigning Lunatic: A Medieval Miniseries was heralded into the world of podcasting and the internet at large with Royal Episode The First: Goblets.

And while that was a good time to get introduced to the show, some of us waited for April 14, 2016 when the final episode, Royal Episode the Nine: Visit the Smithy, dropped in order to binge the entire miniseries.

If you’ve taken the time to hear it all, you know it’s great. Written and produced by Geoffrey Welchman, this “nine-part scripted situation comedy set in a despotic medieval kingdom plagued by dragons, sorcerers, and dreadful Wifi,” is more than the sum of it’s parts.

While Welchman cites “wide-ranging influences: Monty Python’s Holy Grail, The Goon Show, Firesign Theater, Ken Nordine, and Mel Brooks,” it appears that one can draw other conclusions. To me there is an aspect of Marx Brothers, and old Looney Tunes within the fast-paced, joke a minute dialogue… Even if you don’t get all the jokes during your first listen!

In fact, you’ll have to listen to this more than once, because it is that good and just in case it ever does continue, although I’ve been told no further production has been scheduled at this point.

But despite such news from the Reigning Lunatic himself, we should be happy for that which we have received from the Kingdom of Welchmania. 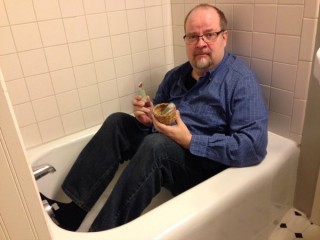 Since, I completed my binge, a promise, I made to the Reigning Lunatic himself, I have been telling everyone to listen to it. EVERYONE! Including you, right now!

This “production of PDS, Poison Dart Studios, Baltimore,” reminds me of a more technologically modern Prairie Home Companion. In fact, since Garrison Keillor has hung up his suspenders, I would heartily nominate Geoffrey Welchman to take over the suspenders or at least do something similar. He’s obviously got the chops!

Perhaps you’ve noticed that I haven’t really given you anything more than the talent and some of the setup, that’s on purpose. I’m not spoiling anything for you!

If I’m lucky, this post will align with the highness’s idea of blogging; “the whole point of having a blog was to flatter the populace with puff pieces about the positive points of my supremacy”, otherwise, I’ll end up on his highness’s favorite game, “Throw him in the Moat!”

Yes, yes, the Reigning Lunatic does have many positive points, long live his supremacy!

So go listen to “this account, of the event, of the occurrence, of the aftermath, of the happening from the hand that gripped the armrest of the throne, gamely.”

Listen to Geoffrey Welchman on Episode 7 of The Palmer Files Podcast.

A difference, to be a difference, must make a difference.
Nothing in the world can take the place of persistence.
Look forward to great fortune and a new lease on life!
More Fortunes >