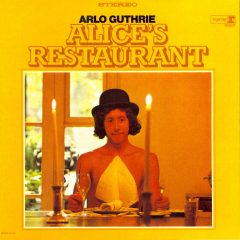 Every year for as long as I can remember, I have listened to Arlo Guthrie’s classic “Alice’s Restaurant,” either on the day before or day of Thanksgiving. It’s something that my parents had started at some point and, more to the point, it’s a tradition I have continued since moving out of the house (to my father’s joy), even when I’m not spending Thanksgiving with them.

Now before I get into the song, and there’s a lot to get into, let’s talk about this tradition. As traditions go, it’s hardly odd, and there’s a part of me that wonders why I don’t encounter more people who share this tradition. I do believe that “Alice’s Restaurant Massacree” may be the best Thanksgiving song ever written, though in truth there aren’t any others that come to mind. Still, I’m not sure anything could top it in my opinion.

The song is a protest song against the Vietnam War draft, from an exaggerated true story of “littering” that Guthrie and Richard J. Robbins lived through. Their local newspaper, The Berkshire Eagle, even wrote about it with the headline, “Youths Ordered To Clean Up Rubbish Mess.”

Because I’ve been hearing this song on Thanksgiving for as long as I can remember, it’s as synonymous to Thanksgiving for me as turkey, stuffing, gravy, pie, and football. I also find the song just as relevant today as when it was released on the album back in 1967.

They just don’t write songs like this anymore, and if they do, I certainly am not hearing them. “Alice’s Restaurant Massacree” has a lot in it: food, crime, “twenty-seven 8 x 10 colored Glossy photographs with circles and arrows and a paragraph on the back of each one,” “blind justice,” drinking, smoking, “blood and gore and guts,” and a catchy chorus to boot.

Because not only does it tell a story, it’s got detail and humor, which isn’t something you often get in song. So as you prepare your turkey, eat your turkey, or recover from your turkey, do yourself a favor and “rehabilitate yourself” with Arlo Guthrie’s “Alice’s Restaurant Massacree.” You won’t be disappointed, because after all “you can get anything you want at Alice’s Restaurant!”

(“KID, HAVE YOU REHABILITATED YOURSELF?”)

Fame and fortune are coming your way.
Even the greatest of whales is helpless in the middle of a desert.
Good clothes open many doors. Go Shopping.
More Fortunes >