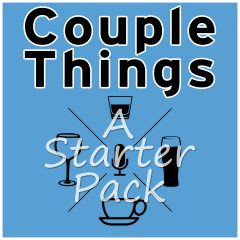 I’ve written about Couple Things Podcast twice before, once for the epic crossover #CTPinJuly with The Stranger Conversations and once as a podcast you should be listening to, but this third time is in honor of their 100th Episode.

Reaching 100 Episodes is a monumental feat for most podcasts. After reaching a one year anniversary, Episode 100 is probably the episode that gets the most hype.

As such, I’ve compiled a list of the Top Ten Must Hear Couple Things Podcast Episodes, a starter pack if you will. Episodes you must listen to if you want to jump in currently, without having to listen to every one of the 100+ prior episodes.

Now, for those not in the know, Couple Things Podcast is a podcast where a couple of couples, Ben & Molly Mendenhall and Ray Loflin & Michelle Von Hershberg (Vonny), “bring a topic to discuss barroom style” each week; four hosts, four topics.

Each show contains an intro, and of late an outtro containing some outtakes, as well as each of the hosts discussing the topics brought during any given episode. The format is not always solid, it is flexible, but most episodes are structured in this way.

While I will say, there is nothing that replaces listening to an entire catalog, at 100 plus episodes, depending on when you jump in or are reading this post, it is a monumental task. So for your consideration, here are the 10 (and their show notes) from the first 100 that you must listen to if you’re jumping into the current feed as it is.

Episode 26: #CTPinJuly
In this week’s special bonus episode, we reflect on our experience as guests on Stranger Conversations with Grant Markham. Be sure to check out all 5 episodes from #CTPinJuly.

Episode 39: Netflix and Chill
In this week’s episode, our group discusses our favorite and least favorite memories of Halloween. If you had the ability to fix Episode 1-3 of Star Wars, what changes would you make? With the VW diesel car scandal making headline news, we ask whether a scandal like that could change your opinion about a big business you previously supported? Finally, if you could take a road trip across America with one celebrity, who would you pick?

Episode 50: Poor Cheryl
In this week’s episode, we discuss how we would get prepared for a snowpocalypse. How do you know what your alcoholic drink of choice will be when going out? If you could be the CEO of any company, which one would you choose? Finally, do you believe in ghosts and would you be become one if given the opportunity?

Episode 54: 1 Year Special
In our special one year anniversary episode, our amazing fans provide all of our topics. With 60 total submissions, it’s our longest episode yet. We discuss a huge array of subjects from smells we’re ashamed to like, McDonalds vs. Wendy’s, and Bigfoot to the future of CTP and our reflections on the first year of podcasting. A big heartfelt thanks to all of our fans and contributors for making this show a success. We hope you enjoy the show!

Episode 62: Podcast Formerly Known As Couple Things (Vonny’s Tweetstorm Reaction in Intro)
In this week’s episode, we discuss which musician who has passed away had the biggest impact on music and do we think they had a bigger impact before or after they died? What are your memories leading up and going to prom? Which wonders of the world would you want to go visit? Finally, what were some of our small wins this week?

Episode 63: The Big Surprise
In this week’s super special episode, we discuss what we are looking for when trying to find a podcast to listen and subscribe to. What are some new things that you’ve been prompted to try that normally you would avoid? What are some pranks you’ve been apart of, how did it turn out, and what was the story behind it? Finally, if you had to trade roles with your significant other, would you survive or die?

Episode 64: CTP After Dark
In this week’s special “late night” episode, we discuss all things dark. What are some scary things that happen in the dark? What is our nightly routine before bed? What are some of our favorite memories about being in the dark? Finally, who are some of the darkest evil villains?

Episode 72: Another Tangent
In this week’s episode, we discuss the worst sun burns we’ve ever experienced and the need for sunscreen. What do we think about high school and college reunions? We rank different forms of media in order of importance to each of us: Television, Movies, Reading, Video Games, and Music. Finally, which Looney Tunes are our favorite?

Episode 86: Cubisode
In this week’s episode, Ben’s Cub’s win the world series and he wasn’t everyone to know about it. Would you give up drinking for the rest of your life if it extended your life expectancy by 7 years? What is your “victory dance”? Finally, which movies coming out this Fall and Winter are you most excited to see?

Now, if you want more, but don’t have the time to jump into the full catalog. Here is a quick list of the runner-up episodes that nearly made the list.

I have been here since almost the beginning, having jumped in somewhere in the teens, thanks to The Stranger Conversations crossover. I’m extremely proud to have been able to share with them some moments on twitter and be considered a vocal supporter of the show on many social platforms. 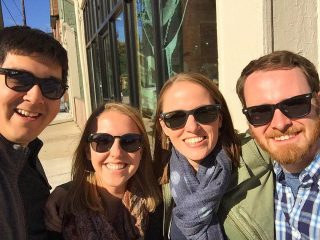 Reaching 100 is, as I stated earlier, quite the milestone and I wish all four of them nothing but the best in the many many more episodes to come.

In the arena of independent podcasting, Couple Things Podcast has a much more solid foundation for staying consistent and on top of things than most. Molly is in charge of their main social media, though you can also tweet Ray, Ben, and even Vonny.

I’ve come to know these four through twitter interactions as well as having listened to the whole catalog and they are genuinely great people. So don’t be shy, press play and tweet along. You won’t be disappointed. And by all means, tell’em Palmer sent you!

Good clothes open many doors. Go Shopping.
The path of life shall lead upwards for you.
Look forward to great fortune and a new lease on life!
More Fortunes >