A Brief Classification of B-Movies and An MST3K Infomercial 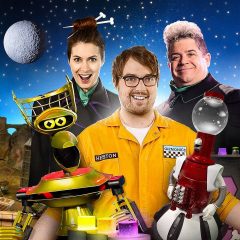 I, for one, applaud them for their efforts. B-movies can, and should be, fun and enjoyable for what they are, but there is a limit. First, what is a B-movie?

Well, it usually describes a “low-budget movie,” but more to the point, one that is made commercially and not a low-budget “arthouse film.” Originally, back in the Golden Age of Hollywood, the term was used to identify the second part of a double feature. Since then, it has largely been used to describe inexpensive films, many exploitation films.

However, despite these films being low on cost, they usually take a lot of skill, no matter how cheesy the effects, they require more skill with less money to get them to look that way. It’s still guerrilla film-making. 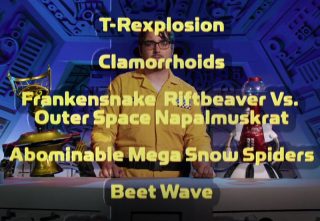 Here’s the other side of it. There still exists another category, which are usually the films that MST3K are making fun of. Those are usually classified as C-Movies, which are movies at the lower end of the B-movie classification. But still, even though there are some gems, there are many more flops that aren’t even enjoyable to make fun of. So I applaud Jonah, Tom, and Crow.

Hereafter is their makeshift infomercial, along with all of the films they have “patented” in order to prevent their creation. So without further ado, I’ll let the stars of the rebooted MST3K explain the real problem of hybrid B-movies, and what they are doing about it.

Jonah: Hey everybody. You know, we have a lot of love here on the Satellite of Love.
Tom: That’s right, but we’d like to get serious for a moment and talk about a real problem.
Crow: Hybrid B-movies. Sharktopus, Piranhaconda, and the like.
Jonah: It’s not okay to just combine an animal with a disaster and release it as a bad-on-purpose movie.
Crow: So we’re drawing a line in the sand.
Jonah: No longer shall the public be fooled by deliberately stupid junk disguised as sincere, heartfelt junk.
Tom: And we’re going to patent as many as-yet-unmade hybrid B-movie titles as we can just to keep them out of the hands of those who would use them for wrong.

Honestly, how many of these would you like to see?

Even a broken clock is right two times a day.
Things are turning for the bright side.
Your moods signal a period of change.
More Fortunes >