Fly Me to the Moon, Let me Play Among the LEGOs (Saturn V Rocket) 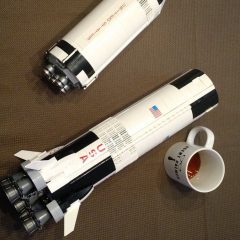 When I was a child, if you had asked me what I wanted to be when I grew up, I would have told you that I wanted to be an “aerospace engineer.” I didn’t want to go into space or to the moon, but I wanted to be a part of it. Be a part of the process of human exploration, and of course, work for NASA. Alas, back then, I was good at math and science, but somewhere along the way, I moved from those subjects to literature and the arts, and any form of engineering disappeared from my future.

Also around this time, I was playing with LEGOs… Alot. So naturally, when LEGO announced that they were going to release a LEGO brick model of the NASA Apollo Saturn V, I marked it on my calendar. I pre-ordered it and then waited for it to come in the mail.

The set features a 1:110 scale model of the rocket that took men to the moon, complete with removable rocket stages for the S-IC first rocket stage, S-II second rocket stage and the S-IVB third rocket stage with the Apollo spacecraft and rescue rocket. It also features a lunar lander, and lunar orbiter, and a display stand for horizontally displaying your completed Saturn V. 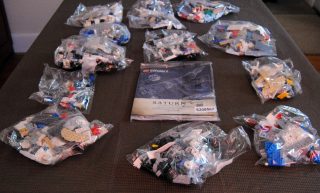 It was on this day, July 20th, 1969 that the real Saturn V completed it’s mission of sending a man to the moon, as Neil Armstrong and Buzz Aldrin touched down on the lunar surface. It took them more than a day to get to the moon from launch but here back on earth, 48 years later, it took me just over four and a half hours to build my model.

Before I opened the packages, I couldn’t have told you the last time I actually built anything with Legos. If I had to guess, I would say at least 20 years, but the thing about LEGO is that it isn’t about age, and the build was fun.

Seeing the different stages come together, as I built through the pieces was not only enjoyable, but took me back to being that kid, oh so long ago, when I thought that this was what was in my future. 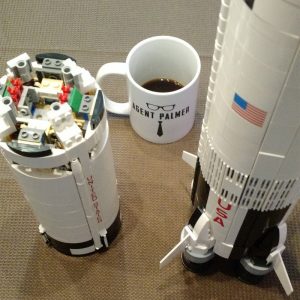 The Building of a LEGO Saturn V Rocket

The design isn’t something to scoff at. Though it’s simple in it’s design, it doesn’t skimp on details, and there was a sense of pride in sticking on the pieces labeled “USA” and “United States,” that I didn’t expect.

Now that this 1,969 piece model rocket is built (nice touch LEGO), it sits on the mantel above my fireplace, under what else, a painting of an astronaut. You see, the child that kinda gave up on math for writing never left me. He’s still inside, still in awe of space flight and the possibilities that still exist beyond the reaches of the “pale blue dot” we call home.

It may seem like I’m building to something, but what I really want to get at is this, for a few hours I played with Legos, forgot about being an adult and remembered what it was like to be a kid again. And that, my friends, was worth every penny of the $119.99 price tag. Thank you LEGO. I will treasure the time it took to build and the new centerpiece sitting on my mantel, underneath my astronaut, that will forever be my LEGO Saturn V rocket.

Even a broken clock is right two times a day.
Your moods signal a period of change.
Even the greatest of whales is helpless in the middle of a desert.
More Fortunes >