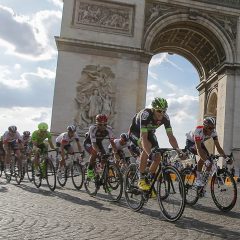 Second to the Yellow Jersey, the competition among the sprinters in this year’s field was supposed to be amazing. But the story had more twists and turns than expected.

Marcel Kittel won Stage 2, Peter Sagan won Stage 3 and then came Stage 4: “The Elbow and the Crash.” I won’t get into it, there are those who stand with Sagan and others with Mark Cavendish, but nonetheless, Cavendish abandoned due to injuries sustained in the crash and Sagan was disqualified for “a dangerous move in the sprint finish.”

This left Kittel in the driver’s seat for the Green Jersey, who entering the Alps had five stage victories under his belt. Meanwhile, Michael Matthews was out in the breakaways picking up intermediate sprint points and had closed the gap to 29 points, before Kittel had a crash of his own on Stage 17 and had to abandon. This left Matthews miles ahead in points competition and gave him his first Green Jersey win.

Had Kittel stayed on, it would have been exciting to see the Green Jersey come down to the very last sprint, but it wasn’t meant to be.

2. More than 100km and separated by hundredths of a second 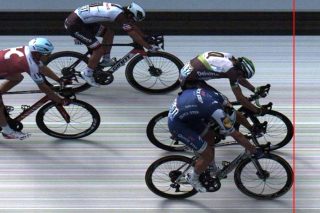 That’s right, there were two photo finishes this year; Stage 7 and Stage 9. It usually doesn’t happen often, much less two times in three days, but it was exciting to watch. I guess there are times where 213.5km (Stage 7) or 181.5km (Stage 9) just isn’t quite enough distance to differentiate the first and second place riders by more than tenths, if not hundredths of a second at the finish line.

After losing teammate Cavendish, Boasson Hagen was the defacto sprinter left for his team. Despite losing out to Kittel in a photo finish on Stage 7, Edvald kept near the front and finally won his team a stage in the Tour on Stage 19. He was there to help lead out Cavendish with Mark Renshaw, but with Cav and Renshaw out, it was left to Boasson Hagen, who finally came through after numerous near misses.

It’s not often that the leading Yellow Jersey candidates have mechanical trouble, but Froome had two issues both at the bottom of important climbs. Perhaps it was just bad luck which, luckily for him, he was able to overcome with the help of the rest of the Team Sky roster, but you have to think that they’ll take more time looking at Froome’s bike next year to make sure it doesn’t happen again and again. 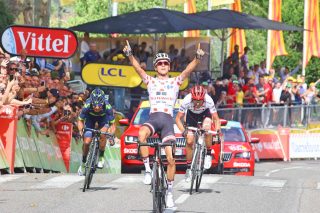 5. Running Away with Polka Dots

Warren Barguil just annihilated the mountains that the Tour de France directors put in front of him. He easily ran away with the Polka Dot Jersey for best climber by more than doubling the point total of second place in that competition Promiz Roglic, having 169 points compared to Roglic’s 80. We haven’t seen that kind of dominance in that classification in a while.

6. The French Win on Bastille Day

It is their race and yet until Warren Barguil crossed the finish line first on Stage 13 of this year’s Tour, the French hadn’t scored a victory on their “National Day” since 12 years earlier when David Moncoutié did it. I always enjoy when a French rider has the opportunity to be at the top of any of the classifications, because the French public respond with much more enthusiasm as the race passes them by. I hope Barguil is their future, with Thomas Voeckler’s career coming to an end this year.

7. What Could have Been: Richie Porte 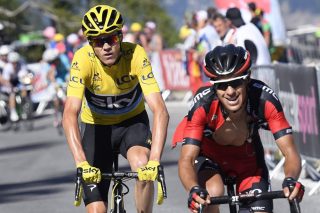 During Stage 9’s descent of Mont du Chat, Richie Porte had a scary crash, that took out fellow Yellow Jersey contender Dan Martin. While Martin was able to ride away and finish the tour, Porte had to abandon with a fractured pelvis and collarbone. In hindsight, we all know how the Tour ended, but Porte with the support of Team BMC could have shaken things up, as he was one of Chris Froome’s major rivals at the start of the race.

8. What Could have Been: Dan Martin

Though he was able to ride away from the crash on the descent with Porte, he lost valuable time. So instead of being right up there with similar times to his rivals, Martin had an uphill battle, along with the lingering ailments from that crash. Despite all of that, Martin put in attack after attack to make up for lost time. But given the nature of the attacks, it would have been a different race if he was seconds away from Froome and not more than a minute behind.

It’s not often that I get caught up in the Team competition, but this year, Team Sky and Team AG2R were in it until the end. It’s not usually that important overall, who wins the team competition, but Team Sky (with Froome in Yellow) felt the heat from AG2R and made sure to match their intensity. Which isn’t to say the race was a pushover. Team Sky had to put in great effort, especially to negate Froome’s mechanical issues and keep him in Yellow. All that work weakened Sky a bit, which is why AG2R attacked, making the team competition a race to be determined.

Though he wasn’t as dominant as in his past three Tour victories, Froome (with the help of Team Sky) earned himself a fourth Tour victory and third in as many years.

Now, I will say that I believe those mechanical issues and his effort to erase the time deficits they created may have taken some of the bit out of his attacks, Froome for whatever reason is coming back to the pack. He may be the favorite again next year, but he won’t be a runaway favorite by any stretch.

I didn’t miss much of this year’s Tour. I watched it all unfold on my tablet or phone or computer or television, and it’s something I plan to continue. I’m a fan of cycling, but there is something special about the Tour; the storylines and the drama. It’s one of the most excited bike races you’ll see each year. Although rider safety is important to me, I never like seeing anyone crash, I don’t think the organizers are about to make future courses any easier on the riders.

These were my favorite moments of the 2017 Edition of the Tour de France, what were yours?

Your moods signal a period of change.
Even the greatest of whales is helpless in the middle of a desert.
The path of life shall lead upwards for you.
More Fortunes >