How the World takes its Coffee

From the usual sugars and various creams; to eggs, cheese, and booze, coffee drinkers from around the globe have their own special way of making magic in a cup with their coffee.

I don’t consider this a list of the oddest ways to partake in coffee, to me it’s just how others around the world enjoy their java. After all, when in Rome, or Vienna, or Malaysia, or Morocco, you should drink as they drink.

Ethiopia
Jebena Buna is not a drink, it’s a full ceremony that involves roasting the beans, grinding them, straining them and then serving the drink. It’s not one of these things or a few of them, but all of them. Would you expect anything less from one of the earliest countries that got buzzed on coffee? 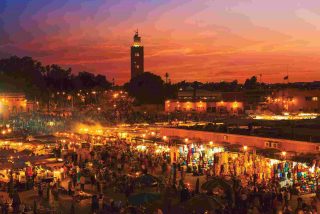 Marrakech at night in Morocco

Morocco
The Moroccans have been drinking coffee longer than most and have many ways to drink it. Cafe des Espices is sesame seeds, black pepper and nutmeg mixed with coffee beans and then ground into to make the coffee. Kopi Susu Panas is equal parts ground coffee and condensed milk. There’s also Cafe Casse, which is black coffee and a little bit of milk. As Marrakech was once the hub of all trade, I’d guess there were quite a few variations over the years.

Senegal
Cafe Touba is a traditional drink in Senegal. Coffee beans are roasted with Guinea pepper and occasionally cloves, then ground and filtered. This drink even impacted the sales of Nescafe’s instant coffee in the region, prompting Nestle to create a brand of instant coffee that included some spices called Nescafe Ginger & Spice.

Austria
Viennese coffee is espresso topped with steamed milk and milk foam, sometimes whipped cream and cocoa powder. And it’s origin has a story attached to it that’s hard to believe. [link to history post] 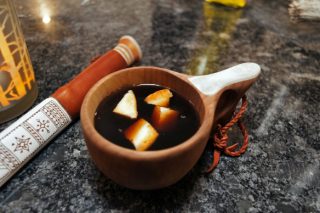 Kaisermelange also known as “the emperor’s blend” is strong black coffee with an egg yolk mixed with honey slowly stirred in… In Vienna a shot of cognac is added to the mix.

Finland
Kaffeost, is a Finnish drink that translates to coffee cheese. The cheese, chunks of juustoleipä (cheese curds), is placed at the bottom of a cup, with the hot coffee poured over it into the cup. Once you’re finished drinking, you’ve have a snack waiting for you at the bottom.

Germany
Pharisäer Kaffee, is the national drink of North Frisia. It’s coffee with rum and whipped cream. But this drink was a “rebellion” of sorts created because Pastor Georg Bleyer didn’t like his congregation’s godless drinking. But thankfully for his congregation, the whipped cream masked the aroma of the rum. Eventually Bleyer found out and yelled, “Oh, ihr Pharisäer!” or “You Pharisees!” thus, the drink was named.

Greece
Greek frappé, is the national drink that the Greeks can’t get enough of. It consists of instant coffee, sugar and water, whisked into a frenzy of foam. It was invented in 1957 accidentally by a Nescafé representative Dimitris Vakondios. His mishap was beloved and became the national coffee beverage of modern Greece in 1979. 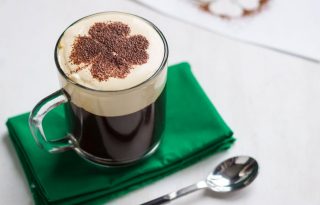 Ireland
Irish Coffee is hot coffee, Irish whiskey, sugar, topped with thick cream. Though the original recipe used cream that has not been whipped, the recipe has transformed over the years.

Italy
Espresso Romano, is espresso served with a slice of lemon to enhance the sweetness of the espresso, though originally the espresso was poured over slices of lime. How did it come about? It was the Americans! One origin has it that American soldiers in Italy during WWII couldn’t get past the bitterness of espresso and eventually discovered that citrus peels cut down the bitterness. Does this feel like a “potayto, potahto” thing to anyone else? It sweetens or it makes less bitter?

Netherlands
Bakkie Troost, is Dutch coffee and they enjoy it day or night. It is usually served black and often comes served with a small cookie. The Dutch love their coffee so much that cafe signs read “De Koffie Staat Klaar” which translates to “Coffee is Ready” but means, “Welcome, Come on In.”

Portugal
Bica, short for “Beba Isso Com Açúcar” which literally translates to “drink this with sugar” is a shot of tart espresso served in a demitasse cup. For the Portuguese, the stronger the better.

Spain
Café Bombon is equal parts coffee and sweetened condensed milk. It started as a popular drink made in Valencia, but spread throughout the rest of the country and the world! In some restaurants, the espresso is served independent of the milk so that patrons can mix it for themselves.

Australia & New Zealand
Flat White is not quite a latte, it’s not quite a cappuccino. It is in fact coffee with a double shot of espresso and steamed milk. While the Aussies and Kiwis don’t agree all the time, on Flat White they do agree, as it is a very popular drink down under.

Turkey
Türk Kahvesi or Turkish coffee is coffee prepared unfiltered that you drink with the grounds at the bottom of your cup. Now the process is where it all comes together as the beans are boiled, not filtered, not percolated, not ground, but boiled until the beans froth and then the first cups are served. But wait, there’s more! Then the remaining coffee is returned to a boil where it is then served again.

Saudi Arabia
Coffee on the Arabian Peninsula is just coffee, they don’t really call it anything else, although travelers would probably call it Arabic Coffee. It’s commonly brewed with a spice of some kind: saffron, clove, cinnamon. It is usually served in special pots; dalla or cezve, portions are small and it is served in cups with no handle.

India
Indian Filter Coffee is made with two teaspoons of finely ground coffee powder, ¾ cup of water, one cup of milk and one teaspoon of sugar. Like many cultures, this coffee is all about the preparation. It just won’t work with coarse grounds.

Japan
Kan Kohi or canned coffee is a movement in Japan, with 5 million vending machines across the country in which to get either hot or cold canned coffee.

Malaysia
Yuenyeung is coffee with tea. It’s three parts black coffee, seven parts Hong Kong-style milk tea (a mix of black tea and milk). It can be served hot or cold and was originally only available at open air vendors, but is now more widely available. 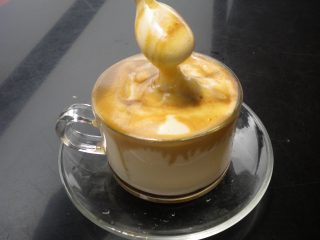 Vietnam
Ca Phe Trung or Egg coffee is two egg yolks, half a teaspoon of condensed milk, honey and vanilla extract beaten until fluffy. This is then topped with hot black coffee.

There is also Cà phê đá an iced coffee with coarse dark ground coffee, brewed straight into a cup of condensed milk and ice through a French drip filter. Now, in the North, they call this Ca Phe Nau Da or brown coffee, and in the South they call it Ca Phe Sua Da or milk coffee. Order according to where you are in the country and you’ll get what you’re asking for.

Canada
The Double Double. Yes, in all the research I did for this post, it appears that the unofficial national coffee beverage of Canada is going to Tim Horton’s and ordering a Double Double, which is made with two creams and two sugars.

There are a few Canadians who have turned me onto using maple syrup instead of sugar, which I’m sure is more common in Canada than anywhere else, as they are serious about their maple syrup. 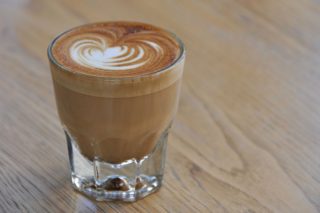 United States of America
Gibraltar, a West Coast delight is a double shot of espresso topped with steamed milk served in a Gibraltar glass. And that glass (made by the Libbey Glass Company), is where this West Coast American beverage gets its name, which is also reminiscent of the cortado. This is a similar drink found throughout the world.

Cafe Americano is literally American coffee, or what the rest of the world uses for “black coffee.” Remember those soldiers from WWII in Italy? They would dilute their espresso with hot water to make it more like the drip coffee they were accustomed to, that’s what it is. So, despite there being a drink that is espresso with hot water added, Cafe Americano can also just mean black coffee.

Interestingly, despite the ample places to get a cup of coffee, regular or exotic, the most Americans brew their java at home. 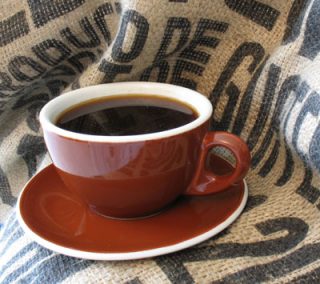 Cuba
Cafe Cubano or Cuban Espresso is espresso brewed with sugar. It’s hot, it’s sweet, and is typically made from darker roasts.

Jamaica
They don’t have their own drink, but they do drink their Jamaican Blue Mountain Coffee, which has a sweeter taste than other coffees. How they take it is all personal preference, but they do have what is known as Jamaican Coffee. This isn’t for everyday, but you mix rum, coffee and water together, top with whipped cream and sprinkle some finely ground coffee on top for garnish.

Mexico
Cafe de Olla is sweetened and spiced coffee, most often with a cinnamon stick, orange peel and dark brown sugar. But with many types of coffee, preparation here is key, as it is prepared in a earthen clay pot and this gives it a special flavor. 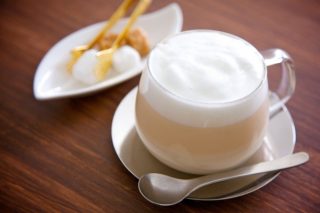 Argentina
Cafe Lagrima is steamed milk and foam with just a drop of coffee. Just a drop! But it is made in an espresso-sized cup, so there isn’t much room in there to begin with.

There are many more ways to drink your coffee than those mentioned here. But this is just a sip. The rest you have to do on your own. But honestly, before you tell me I left something out… How many of these have you tried?

The path of life shall lead upwards for you.
Your moods signal a period of change.
Nothing in the world can take the place of persistence.
More Fortunes >