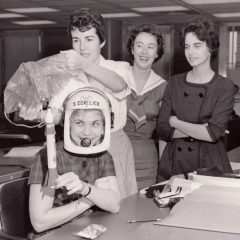 “Most harmful behavior is based in fear. Protecting one’s perceived position in society, protecting one’s territory, or one’s physical well-being. But progress is inevitable.”

That’s the opening quote from Netflix’s original documentary on 13 women known as “Mercury 13” who could have become America’s first women in space. But at that time it wasn’t meant to be, and that’s the compelling part of the story.

It’s about freedom, adventure, and the love of flying. That’s the origin for the women of the Mercury 13. It wasn’t about challenging the men for space flight until they were denied access. Their aspirations were no different than their Y chromosome counterparts, except that the social norms of the late 1950’s and early 1960’s were such that they weren’t given the opportunity at that time.

The idea of the “Women in Space” program that birthed the Mercury 13 was the brainchild of Dr. William Randolph Lovelace II, who was responsible for developing and conducting the tests on the first Project Mercury astronauts. After processing the men through his Lovelace Clinic, Dr. Lovelace developed a secret program to test women in the same fashion as the men. It was also partly inspired by rumors that the Russians were training women cosmonauts.

Their story is one that was influenced by Jacqueline “Jackie” Cochran, the first woman of flying and the WASPs (Women Airforce Service Pilots). Afterall, Sputnik didn’t just stir the loins of men… 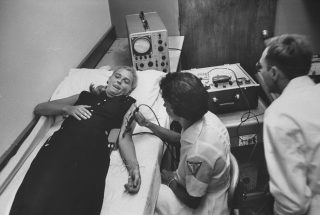 After Phase II of the enterprise, in which Dr. Lovelace found the women to have done exceptional, sometimes even better where the sensory deprivation tank was concerned, he took his findings to Washington. This was the first the government had known of this secret project and they shut it down before Phase III could get underway.

Phase III involved jet orientation and the centrifuge. Jet orientation was the one qualification that the women couldn’t get that the men could because women weren’t eligible to fly jets at the time.

Those qualifications, at least those at the beginning of Project Mercury were “Each must be: the graduate of a navy or air force test pilot school, 1,500 hours of flight time, qualified in jet aircraft, an engineering background, and 5’11” or less.”

Enter the controversial figure and inspirational hero Jackie Cochran. She didn’t make the cut for the Mercury 13 but had flown jets. “I’m Jacqueline Cochran, and I really would like to be the first woman in space. Anyone who’s spent as much time in the air as I have in the last 34 years is bound to yearn to go a little bit farther.”

Despite her eagerness to participate, Cochran became one of the nails in the coffin for the program. After Lovelace’s project was shut down, Jerrie Cobb and Janey Hart went before a special subcommittee on the selection of astronauts. The hearings are a good portion of the documentary and it is here that the major arguments for and against were made.

While Hart and Cobb’s opening statements are well put, it was the John Glenn and Jackie Cochran that put the program to bed. 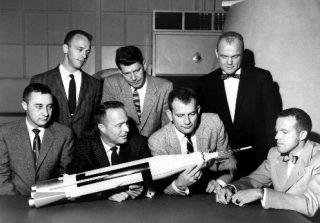 Glenn stated, “The fact that the women are not in this field is a fact of our social order.” And for the time… He was correct, although that still doesn’t make him right… The fact is this hearing which was basically investigating gender discrimination two full years before the Civil Rights Act of 1964 made such a thing illegal.

But the women expected as much from Glenn, what they didn’t expect was Cochran’s testimony:

“The manned space flights are extremely expensive and also urgent in the national interests and therefore in selecting astronauts it was natural and proper to sift them from the group of male pilots who had already proven by aircraft testing and high-speed precision flying that they were experienced, competent, and qualified to meet possible emergencies in a new environment… From all, I have been told by the newspapers, that we do not want to slow down our program, and you are going to have to, of necessity, waste a great deal of money when you take a large group of women in, because you lose them through marriage.”

It’s not arguable that Cochran didn’t prepare her statement… She wanted to be one of them and perhaps her statement would have been different had she been one of the 13. But with political pressures, because her husband had contracts with the government… “And they took my testimony. I sent it around and got what I was going to say approved by the chief of staff of the air force, the chief of naval operations, and the army, and with a little note that said, ‘This is what I’m gonna say. But if you don’t agree with it, I’ll try to avoid testifying and I won’t say anything.’” 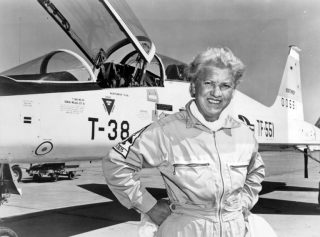 “Jackie was a champion of Jackie…” is what is stated in the documentary and you can’t argue with that.

But what is more telling is Glenn. I’ve read and casually studied Mercury, Gemini, and Apollo because I was transfixed on the space program as a child. Was Glenn’s motivation purely chauvinist? I don’t think so, at least not entirely. Glenn wasn’t a dumb man. He was an engineer, an astronaut, and eventually a U.S. Senator.

Space travel at that time was an expensive endeavor, and even with the full support of the government and the nation at large, it’s not exactly like there were enough missions to go around. Least of all for those initial Mercury Seven, and not even for those eventually added for Gemini and Apollo missions. Competition, as it turns out, isn’t the best environment for inclusion, is what I’m getting at. I believe the argument would have been different had an effort been made to include a woman in the initial group of Mercury Seven astronauts. 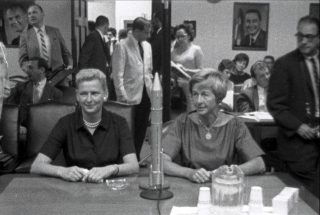 Cobb and Hart at the Subcommittee Hearing

But that’s just my read of the situation and to an extent it’s what Jim Hart believes as well, quoted in the documentary with “I think it had as much to do with the boys not wanting to have the light taken away from them because they were the heroes of our time.”

Another great quote from the piece furthering the women’s cause came from an unidentified man in the street, who when asked if there should be women astronauts answered, “I certainly do think women should be astronauts. If they’re physically fit, mentally alert, they’re not any different than men are. In fact, there are less women going to psychiatrists than men, so that gives you some idea as to their mental capabilities.”

But alas, it wasn’t meant to be. During “The Space Race” the Russians dominated almost every facet of the enterprise. The first man in space, first spacewalk, and in June 1963 Valentina Tereshkova became the first woman in space.

Moonshots were the only time the U.S. took the lead in the space race… First with the orbit of Apollo 8 around the Moon and then with the first lunar landing of Apollo 11. But for the women of the Mercury 13, their national pride aside, they wanted to see women astronauts. Following Tereshkova was Svetlana Savitskaya another Russian who was the second woman in space, but the first woman to do a spacewalk in 1982. 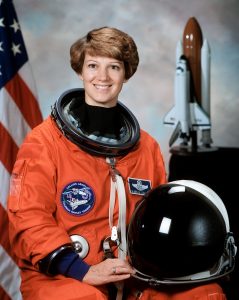 Still, for the women of the Mercury 13, Sally Ride’s 1983 success as the first American woman in space was not the achievement they were looking for. They wanted to see women pilots. And for them, it was Eileen Collins, the first woman astronaut pilot that was the monumental achievement. And Collins in her first press conference mentioned them and honored them as heroes and pioneers…

Collins is still helping to inspire the next generation, “When I talk about the future of space exploration, one of the things I tell young people nowadays is, ‘Of the 12 people that walked on the moon, they were all men. But that was a function of the culture that we had in the world back in the 1960s. You can be the first woman to walk on the moon if you wanna be an astronaut.’ That’s the message I tell young people. Maybe the first person to walk on Mars will be a woman.”

I know we haven’t completely removed gender discrimination from the planet, but as slowly as we may be moving at times, we are moving forward. This documentary, “Mercury 13” is a great example of a few women who put the pedal down to speed up such progress. And it is very well done.

For more information, I would suggest you read the full transcript of the subcommittee hearing, as it puts into context much more than the relevant quotes picked out in the documentary.

Read the Secret File of technical information and quotes from Mercury 13.

Even the greatest of whales is helpless in the middle of a desert.
Sharing little joys offer great hope to others.
Even a broken clock is right two times a day.
More Fortunes >