Disenchantment is a Return to Form for Matt Groening that’s more Futurama than Simpsons.

Matt Groening returns to the small screen with Netflix’s Disenchantment. The writer’s room and voice talents are a who’s who of Futurama and Simpsons veterans with some IT Crowd connections like Matt Berry and Noel Fielding rounding out the star-studded cast. It’s five hours of the animated stylings that made The Simpsons and Futurama so good, that’s right, it’s the quickest binge you’ll ever go on with 10 half-hour episodes waiting for you.

This medieval fantasy takes place in the Kingdom of Dreamland and the three main characters are Princess Tiabeanie, Elfo the elf, and Luci the demon. While, King Zøg, the Odval, and Sorcerio maintain what passes for power over the kingdom.

Groening’s fans will notice that the humor and storytelling are more Futurama than Simpsons in style and substance and for myself, and others like me who preferred the science fiction of Futurama to The Simpson’s family dynamic, this is a welcome return to what made Groening great. 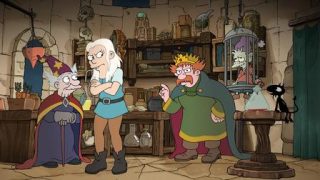 The dialogue, the physical comedy, it’s all there, and in abundance, within a well-defined story that makes up Part 1. And more to the point Futurama fans will notice that the princess, known as Bean, for most of the series, plays a Lela type role, while Elfo falls into Fry tropes and Luci is typecast straight outta Bender. While Odval and Sorcerio are kinda like Hermès split into two parts.

Seriously, it’s hard not to make those straight line character comparisons. But the show doesn’t suffer from it. Now, online, there appear to be mixed reviews of this first season, but there were also those who had mixed reviews of Futurama, you either love it or you don’t get it, and unfortunately, from what I’ve read Disenchantment follows suit.

I also must point out that King Zøg is John DiMaggio being his John DiMaggio-ist and at times he even appears to be channeling a little Avatar from Wizards, which isn’t just because of his rotund physique and red hair, but more so in his delivery.

Clearly, as a Futurama fan, I not only get the jokes but I love the series and can’t wait for more. Now, of course, I realize that I’ve made some very broad generalizations, but these are not merely passing glances, I’ve watched the series twice already and thoroughly enjoyed it both times. Come on, the Washmaster chants like Futurama’s Native Martians! 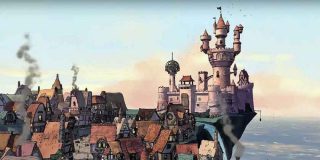 For the generation that grew up on The Simpsons and matured with Futurama, this is the cartoon you’re looking for. But that’s a very specific generation, so I hope that the rest will be able to get as much entertainment out of it as we do…

The 10 Episode Titles are spoofs and comedic in their own right; “A Princess, an Elf, and a Demon Walk Into a Bar,” “For Whom the Pig Oinks,” “The Princess of Darkness,” “Castle Party Massacre,” “Faster, Princess! Kill! Kill!,” “Swamp and Circumstance,” “Love’s Tender Rampage,” “The Limits of Immortality,” “To Thine Own Elf Be True,” and “Dreamland Falls.”

In the meantime, I’ll leave you with some spoiler-free quotes from the series I particularly enjoyed:

I’d rather die a big death than live a small life. – Elfo

You two sleep down by my feet. I call it the friend zone. – Bean
Get comfortable. You ain’t never getting outta here. – Luci

Speaking of things getting poked, we’ve got a wedding to plan. – King Zøg
Ew, Dad, think out the words before they come out. It’s— – Bean
I know. It felt weird when I said it. – King Zøg 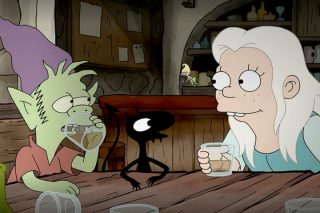 We be sailing into treacherous waters. To starboard, man-eating sharks. To port, a sunset so beautiful the rest of your life will seem anticlimactic. But the worst lies ahead. For there lurk the two shores of Mermaid Island and Walrus island. And you don’t want to mix those up, believe me. – The Captain

“Four o’clock and all is well! Actually, “well” is a bit of an overstatement. “Acceptable” is more like it, if you consider death, disease and rampant poverty acceptable. – herald

I’m kinda scared to try this. Will you guys peer pressure me? – Elfo
Sure thing, buddy. – Luci

Trust me. I haven’t led you astray in minutes. – Luci

We scholars like to think science has all the answers, but in the end, it’s just a bunch of unprovable nonsense… – Wizard
So now what? – Queen Oona
I suggest something based more in reality. Religious magic. – Wizard

Oh, God. I’m so sorry, I lied. I’m not really fun. The pressure, it just got to me. And then the pressure to sustain the lie? Oh God, it was a nightmare. – Elfo

Dude, decide what you want, drink till you have the nerves to go for it, then keep drinking so the inevitable rejection doesn’t hurt so bad. – Luci 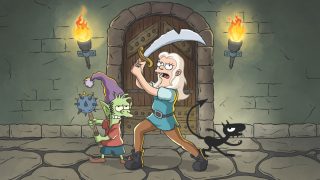 I always wanted to be in the entertainment industry. You know, in Hell, I was a communications major. – Luci

Every time that girl gets a little responsibility, somebody winds up alive. – King Zøg

Never send a princess to do a demon’s job. – Luci

Oh, Beanie, you’re a no-good, drunken disgrace. And in this kingdom that’s saying something. – King Zøg

Just once could we go on a family vacation without having to run away screaming? – Luci

Entertainment is just a tool that pacifies the masses and leads to the decay and ultimate collapse of civilization. Luci

It is so weird to wake up on the back of a flying griffin and remember everything from the night before. – Bean

It’s just too painful seeing the truth all the time. – Tess
Ah, that’s why humans tend to avoid it. – Luci

There you are. In the meantime, do you agree with me? Is this more Futurama than Simpsons? Is this more brilliance from the writers of two cult classic status animated shows?

Nothing in the world can take the place of persistence.
Things are turning for the bright side.
Good clothes open many doors. Go Shopping.
More Fortunes >