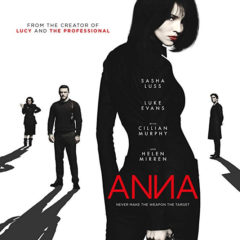 Anna, directed by Luc Besson, has three legit stars in it: Helen Mirren, Luke Evans, and Cillian Murphy. After a failed relationship ends suddenly, she is recruited by the KGB. After a year in training and two in the field, she learns the promise of freedom after five years of service is a lie. She is also a successful model between jobs, and working dual professions is hard on her.

Under the thumb of the KGB, including her handler, Alex (Evans) and intelligence officer, Olga (Mirren), she is a precise and methodical killer. A CIA handler (Murphy) recruits her as well for a specific mission. She struggles to serve two master agencies, but she continues to soldier on between them. Anna wants out more than ever, but she continues to meet their demands and maintain a romantic relationship as well.

Anna has its moments, and it’s a perfect film for a lazy, rainy weekend at home. This is not a movie to plan your night around. The film jumps around time in a very amateur way. The ending has a hint of Lord of the Rings: Return of the King to complete Besson’s story. Anna is not a waste of time, but you have to be patient at times while watching the story.

Agent Winchester (@roymac75) is a movie and TV geek, husband, father, and former movie theater and video store employee. I want to be Hollywood’s Vice President of common sense and bridge what projects we want as fans to help them make even larger gobs of money.

Today it’s okay to make a few choices by going with your instincts.
Your moods signal a period of change.
Things are turning for the bright side.
More Fortunes >