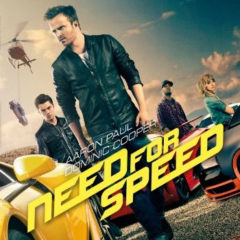 Sure, it’s about a video game, and those kinds of movies don’t typically hold much water but 2014’s Need For Speed movie contains a plot no more or less complicated than the plot from any of the Need for Speed (NFS) games, which I played many many times. And it has the combined superpower of a young Rami Malek, Aaron Paul, Dominic Cooper, Imogen Poots, Kid Cudi, plus the amazingly talented and brilliant Michael Keaton, and the show-stopping cars you would expect it to have.

I enjoy the film because it does quite a few things well and one thing very well. It conveys the feel of the video game franchise into another medium without actually feeling forced, which brings about point two, the film knows what it is and it is just a fun popcorn film that shouldn’t be taken too seriously, and lastly the cars are characters in themselves, with the Shelby Mustang being the star car of the film.

Now let’s take a look into how the Need for Speed franchise transfers mediums onto the big screen. The film is essentially a chase/road trip film that doesn’t differ much from the game series. In fact, the film goes out of its way to have different cars and different types of races or nods to those different classifications.

The first race we see out of the gate is a classic muscle car race. The second race is all about Euro-spec cars. Then we get the solo beat the clock across the country, with some brief cop shenanigans, not unlike the game if you managed to work in some “Pursuit Breakers” to lose the cops chasing you, and then at the end, you get an all stakes winner takes all boss race, where you get to bring whatever car you wish. 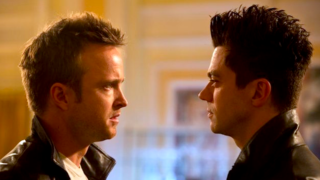 Despite the plot, this build in the races we see is very gamelike and that means the story by George and John Gatlins, that George then turned into a screenplay, is proof they were fans of the game series.

The plot isn’t that complex, Tobey Marshall (Paul) gets blamed for the death of his friend, while actually at fault is his former hometown rival now racing superstar Dino Brewster (Cooper). Tobey goes to jail and when he gets out he wants to enter the De Leon, a mysterious invite-only winner-takes-all race run by Monarch (Keaton).

In order to enter the race, or even be invited, Tobey enlists the help of his friends and calls in a favor to get his hands on the car he believes can win De Leon. But the car comes with a catch in the form of Julia, as the car is her bosses’ and they start in New York and need to get across the country fast, to get the invite and check-in for the race somewhere in California in just under 45 hours.

Along the way, Finn (Malek) and Joe (Ramon Rodriguez) assist on the ground with Benny, or Maverick as he likes to be called (Kid Cudi) assisting from the air.

That’s a very simplistic view of the plot, but the movie is mainly about racing and it is not only shot well, but the speed comes across with the various lenses used to capture the action. 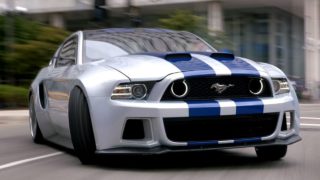 The Shelby Mustang that we find ourselves rooting for with Tobey behind the wheel is not only a beautiful clean white with two navy blue racing stripes but the mechanics and the sound engineers tuned the car to make a wonderful sound when the engine is revved, whether it be to draw the cops’ attention in Detroit or to outrun the cops on the plains.

Honestly, it’s a hard sell for some people, and not just because it’s a video game movie, and those don’t generally tend to be received very well or because it’s a car movie and you either like them or you don’t. Don’t get me wrong, this isn’t Smokey and the Bandit or Bullitt, but it has its moments.

The tension that builds throughout the movie between Tobey and Dino is well done without being too overbearing. The dialog isn’t flat and at times it’s pretty funny, but the man of mystery behind De Leon, who basically does nothing but sit behind a microphone for the whole film, Monarch, played by Keaton, is a standout personality that helps to tie the entire plot together along the way while also spouting off some great lines, at least in the context of the film.

“Hey, I’ve been doing some homework on this kid Tobey Marshall from Mount Kisco. This kid was a phenom. Used to tear up the local circuits. Him and his dad, man, they campaigned like champions. Of course, Mount Kisco had another great, Dino Brewster. You all know Dino. He went on to race in the big leagues at Indy, and Tobey just kind of fell through the cracks. Well, here’s some news, cretins. Tobey’s been running again, and running fast. Real fast, fast as that ‘Grim Taquito’ will take him. Tobey, you wanna fly with the eagles, you need bigger wings, son.”

“This is too good. I got star-crossed lovers hauling ass across the country. I got Dino Brewster who just painted a huge bull’s-eye on their ass. Oh, man. Christmas came early, wing nuts.

“The thing you gotta understand is, racing is an art. Racing with passion… Dude, that’s high art. Man, I can feel love and vengeance and smell motor oil all swirling together out there. We got supernatural Mustangs, we got personal vendettas. I have no idea where this is going. I just know I like it. I like it a lot.”

“The two of you out there, flying across the country at killer speeds to prove something while you’re tearing up the American asphalt. Born to run, baby. Born to run.”

More than anything, those six quotes not only give you some backstory, and explain some of the plot points in a different way, but they are so well delivered by Keaton as Monarch, that those are the reasons I went searching for this film in the first place. 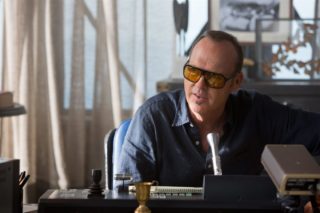 Michael Keaton as Monarch in Need for Speed the Movie

I first came across this film on TV, I don’t remember what network, and it was near the middle when many of the Monarch quotes above are seen. And so I went to find out what this movie was. Then I sat down to watch the whole thing and I just kind of found myself enjoying it, and now I own the film.

Sure it’s not everyone’s cup of tea, but it is absolutely a fun popcorn film. It may not be a classic like the other car movies that first come to mind, but it’s just as good as any of the Fast and the Furious films I’ve seen (which is only about half the franchise) and I’ll easily argue that the Shelby Mustang is better than most of the cars that franchise put on film.

Even Gone in 60 Seconds shared an appreciation for the Shelby Mustang. But enough about Mustangs, Need for Speed is more than just a Mustang and more than the sum of its parts, which is saying a lot for a video game-based film. So whether it’s for Keaton or the Mustang, go out and find this film and let me know if it makes you want to “haul ass across the country” or pick up an old copy of a Need for Speed game you have lying around.

Read the Secret File of technical information and quotes from 2014’s Need For Speed.

Good clothes open many doors. Go Shopping.
Sharing little joys offer great hope to others.
To let another into your heart, first let yourself in.
More Fortunes >