The definition of Wizard has changed over the years, but many of us think of Gandalf, or the classic D&D Wizard, which is basically a younger Gandalf with no beard and a blue hat with stars on it. So I looked up “Wizard” on DeviantArt to see what would come up, and I wasn’t disappointed.

Now, to define wizard as a word, the definition changes based on where you look. The oldest dictionary I have is a 1977 Funk & Wagnalls, the first noun definition reads “One supposed to be in league with the devil; a male witch; sorcerer.”

Moving a little more forward, my 1981 Webster’s New Collegiate Dictionary defines Wizard as “a wise man” or “one skilled in magic.” Today Dictionary.com says the noun is “A person who practices magic; magician or sorcerer” or “a conjurer or juggler.” 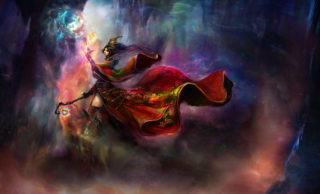 And personally, I define Wizard as Gandalf from Tolkien’s Lord of the Rings or Avatar from Ralph Bakshi’s Wizards. But the point is, there are many ways to conjure up a Wizard, so let’s see what fruit my search bore, in the form of art and interpretation.

Starting off with Wizard – Frozen Orb by muju, this is a swirling vortex of color, surrounding our hero in a dark cave as she appears to attempt to conjure up a ball of ice. What I really enjoy about this is the nature of the idea of practice. In Tolkien and more specifically Terry Brooks’ Shannara series, Wizards aren’t out to use their spells, have they ever practiced them? But beyond the concept, the execution on this piece is a wonderful melding of digital art made to look more traditional. There are no paint strokes as in the old fashion, but there’s still something organic, despite the fact that this is a digital painting.

Moving on from practice to action. 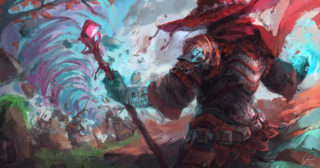 “A wizard casting a tornado spell.” What muju gets correct about practicing is everything JasonTN (Jason Nguyen) gets correct about actually casting a spell in real-time. This Wizard, with the staff, the belt and other ephemera, the hat, the scarf, and the pose and poise, is wrecking whatever is under that tornado. And it continues to the destruction as the debris flies out. Plus the colors are so vibrant, especially since the scene appears to be set in broad daylight, so much about this piece I absolutely love. 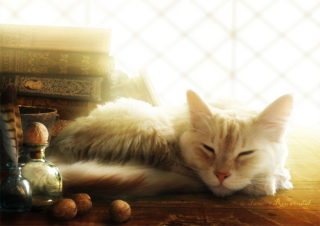 But whether it is practicing alone or recovering from the real thing, Wizards, I would hope don’t do it completely alone.

With artist tamaraR‘s cat Pip modeling as the Wizard’s familiar, it’s nice to see a white cat in fantasy, among the quills and books. Wizards, after all, don’t tend to keep many friends if they aren’t an adventurer, and when left to their own devices, this is a happy thought to think that at least a familiar will keep them company. Besides, who better to protect you from certain enemies than a white cat!

And when a Wizard goes on an adventure or a quest, are they infallible?

Well, artcobain seems to think it isn’t so. This piece “wizard’s mistake2” is not only beautiful, but it is also instantly thought-provoking.

Questions like: Did the Wizard miss its target? Was the enemy successful? A combination of both? Neither? Was the protection of this building in the Wizard’s charge or was it supposed to be demolished at the Wizard’s hand, yet only one wall managed to come down?

So many questions and yet one thing remains. It is a beautiful fantasy cityscape, and I’d take a walk there if the city was repaired and there would be no worry of attack from across the bridge or above my head. 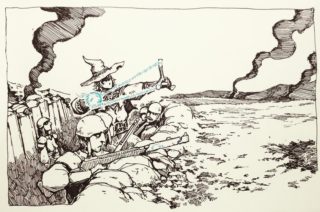 But one thing remains a Wizard in battle is a great ally to have. Even if or maybe especially when you are in the trenches. “Wizard in the Trench” by ashpwright (A. Shipwright) is very reminiscent of Ralph Bakshi’s Wizards. Not because Avatar would ever go in a trench, but because whenever I see magic and technology together in close proximity in a battle on the canvas, page, or screen, that’s where I first saw it.

But what’s more, is that the artist has not only drawn the scene, he’s got some dialog going in the caption.

“I hate that pointed-ear wizardo.
We cannot use magic and are drove out to this stinky trench of the damned frontline with these enchanted stick.

But now look at him playing with slingshot as if we’re in a playground.”

“Private Nilson, if you can’t swipe out the enemy in squads like he did, just shut the hell up.”

On every level, I love this piece, and as such I really did save the best for last.

We’ve come a long way since the first recorded use of “Wizard” in the earth 15th Century. And while a lot has changed in the definition, since the advent of Dungeons and Dragons, and more recently with the live-action adaptations of Lord of the Rings, I would expect that a certain aesthetic is now automatically prescribed to Wizard in our mind’s eye. But as any great Wizard will tell you. Do not be deceived by yourself.

Whoever wants to reach a distant goal must take small steps.
The path of life shall lead upwards for you.
Even the greatest of whales is helpless in the middle of a desert.
More Fortunes >