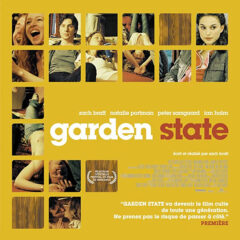 Garden State examines the cloud of one’s self. There are moments of varying length where we spend a ton of time in our own world; meanwhile, to the world at large, we’re just going through the motions.

This film is about that, and how one person, at one time, pulls himself out of that cloud.

It’s also very much an art film. The first few minutes establish that well, and Zach Braff’s vision of the film as a piece of art is beautiful.

That beauty, however, is in contrast to the difficulty of going home again. While the film is set against the backdrop of mourning the loss of his mom, Andrew Largeman is also through the looking glass at the beginning examining the place where he came from and where he is.

Braff, writer and director and lead actor as Largeman, is joined by friends both new and old including Natalie Portman, Peter Sarsgaard, Ian Holm, Jean Smart, Method Man, and Jim Parsons, among others.

For me, the focus on the concept of projection is a running theme, because while Largeman doesn’t correct people when they assume as an actor in L.A. he is successful, they also have no idea what it entails as opposed to reality. Everyone is trying to set him up with other L.A. people they may know around the industry or pitching ideas to him they hope he can help make. 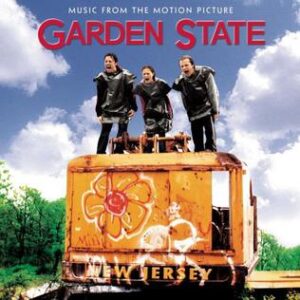 Perception and reality play a larger part in the subtext of this film, and I love that part of this script; it makes it, in my mind, an artistic film in more than its visual storytelling but in its writing as well. The visuals are a credit to Braff’s vision as a director, as is the music.

The soundtrack, often referred to as Braff’s mixed tape or CD mix, won a Grammy in 2005. It’s a beautifully eclectic album with music that is not necessarily of the time. The combination of Coldplay, The Shins, Zero 7, Colin Hay, Cary Brothers, Remy Zero, Nick Drake, Thievery Corporation, Simon & Garfunkel, Iron & Wine, Frou Frou, and Connie Somerville makes a memorable mix that can be listened to any and all the time.

The only thing that feels dated to me in Garden State is the drug use that is 100% of its time. Weed may not be an issue anymore, but the cocaine use raises some flags, and Largeman’s medicine cabinet of prescription drugs would be worth more on the secondary market now than back in 2004.

My favorite scene has to be the knight getting breakfast. The blurring of fantasy and reality is wonderful. I know that many people enjoy the leg-humping scene, but for me it’s the knight scene. Because of the way the film starts out with a dream, that knight scene blurs the line and you’re not quite sure immediately if it’s real or fantasy, or that Largeman is waking up after a party… 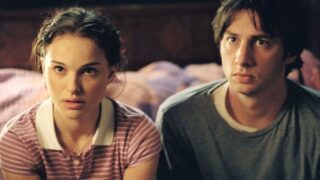 The movie is also very slice-of-life-adjacent. While Largeman comes home to bury his mom and that is his view, he sees what his friends are now up to. He meets Sam and sees what her life is like, and all of a sudden the actor who waits tables sees life alternatives to the path he was on out west. This is the backdrop that makes comparisons of life to life as portrayed in the script so poignant.

“Trust me, my family’s way more fucked up than yours.” That’s such a subjective statement, and considering we only get to see three families or parent-child dynamics within the film, Largeman is correct – but only from his point of view, so it’s potentially true for all of us.

The idea of family is closely tied, for many of us, to home. The scene that stands out above all is a conversation between Largeman and Sam,

Andrew Largeman: You know that point in your life when you realize the house you grew up in isn’t really your home anymore? All of a sudden even though you have some place where you put your shit, that idea of home is gone.
Sam: I still feel at home in my house.
Andrew Largeman: You’ll see one day when you move out. It just sort of happens one day and it’s gone. You feel like you can never get it back. It’s like you feel homesick for a place that doesn’t even exist. Maybe it’s like this rite of passage, you know? You won’t ever have this feeling again until you create a new idea of home for yourself, you know, for your kids, for the family you start, it’s like a cycle or something. I don’t know, but I miss the idea of it, you know. Maybe that’s all family really is. A group of people that miss the same imaginary place.
Sam: Maybe. 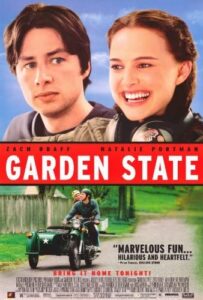 Family, home, death, being original – there are so many themes wrapped up into just one 102-minute feature film. This movie also happens to be about life, living, and our past, present, and future.

It’s not just a funeral film. It’s not just “that Braff guy” trying to do something other than Scrubs. It’s more than any label that you could apply to it. It’s art, and as a debut for Braff both as a writer and director, it’s no wonder he’s gone on to more.

It’s about being original. Braff is, but originality isn’t wholly unique to Hollywood. We are all who we are. Being you is enough, but if you aren’t in control, and need a break, perhaps Garden State is a film you should watch, and soon.

Read the Secret File of technical information and quotes from Garden State.

Even a broken clock is right two times a day.
To let another into your heart, first let yourself in.
Today it’s okay to make a few choices by going with your instincts.
More Fortunes >