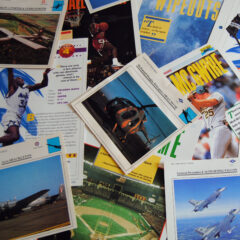 There’s been a lot of talk about the naming conventions of a certain generation of late. I am one of those unfortunate souls stuck in between, particularly of the newly coined “geriatric millennials,” but it did come with some benefits. We were adaptable to the technological advances of our time, but we also got to experience the joy of the mundane as did our predecessors in Generation X.

Two of those things I came across while cleaning out some old boxes that highlight the mundane were Newfield Publications’ Sports Pages and Edito-Service Military Aviation Airplane Cards. These are two things that could only come from the late 80s/early 90s. They are pseudo collectible things with information that was then-soon-to-be-readily-available-on-the-internet, with no additional value.

When I talk about no additional value, I’m comparing them to the mid-90’s boom in collectible card games – Magic: the Gathering, Spellfire, Star Wars, and the like – where as a fan you could collect them but also play games with them.

All you could do with Sports Pages or Aviation Cards was collect them. Their value as collectibles has not grown at all, compared to the baseball, football, or basketball cards that have been intrinsically part of every childhood from that of my generation and backwards.

As historical timepieces, these pages and cards tell the story of Generation X and perhaps even my in-between generation. We weren’t going to be interested in encyclopedias in any general sense, but there wasn’t a readily available internet either. Sports Pages and Aviation Cards created something larger than baseball cards for no true apparent reason. 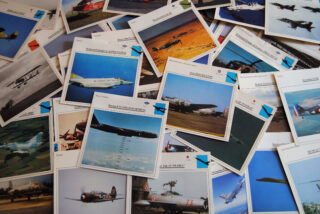 Here’s the part that boggles my mind. I enjoyed these when they were given to me, but I don’t remember asking for them at all. I don’t remember going back to them time and time again, and in truth, until I came across them, I didn’t even know I still had them!

Now, I am superbly aware that the collectible card market is vast. As a young child, I collected most of the major sports league cards, and somehow also ended up with some Desert Storm cards, Election ‘92 cards, and various movie collectible cards as well. I get the idea of them all, but Sports Pages and Aviation Cards, even as I hold them in my hands right now, make me scratch my head!

I won’t be keeping these. There’s simply no reason to. For this moment, however, the Sports Pages are the most intriguing. The Aviation Cards are just what they are and things haven’t changed. The uses of old planes and their technical data have not changed. While there may be more detailed information for the Avro SHACKLETON, Messerschmitt Bf 109, McDonnell Douglas F-4J Phantom II, and Boeing B-52 STRATOFORTRESS as examples, the information on the cards themselves is general yet still accurate.

The information on Sports Pages, on the other hand, has changed, especially since a lot of the players continued to play after the printing. Records have perhaps been broken several times over, and even many of the stadiums no longer stand. 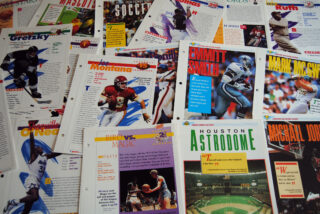 Some fun examples are Mark McGwire in an A’s uniform, Shaquille O’Neal in a Magic jersey, and Joe Montana in Kansas City Chiefs red. Like their Aviation Card counterparts, Babe Ruth had long since retired, as had Walter Payton, but Nolan Ryan’s career wasn’t over yet. While he didn’t add another no-hitter to the seven he already had when his Sports Page was printed, he very well could have. Of the “Famous Arenas and Fields” that I have, only the Astrodome Sports Page survived. While the Sports Page is destined to be thrown away, the real one is no longer in use, and even as of 2019, the real one’s use is still TBD.

These cards and pages make me think of my generation more than anything else. It was targeted towards Generation X’s younger side. Those of us who were slightly younger but yet aren’t millennials were there to pick up the stuff. These relics are just two examples. I’m sure there are plenty of other things that were marketed at one large generation only to be picked up by the next or the in-betweens.

During episode 45 of The Palmer Files, guest Chris Webster and I discussed the idea of holding on to stuff, and the idea of purging things to make space is something I’ve already written about. Despite my constant decluttering, I might actually hold on to one or two of the Sports Pages and Aviation Cards just to remember how lucky I was to be part of the in-between generation – not quite Generation X or Millennial, and without a widely agreed-upon name in the media.

If you ask us, most of us have Generation X values with Millennial skills and adaptability. That’s the standard breakdown. While I don’t speak for all of us, I do speak for my friends who are also a part of that shoulder generation.

So, do these Sports Pages and Aviation Cards have value? Maybe not monetarily or even historically, but culturally, they are timepieces worthy of some kind of remembrance, even if we’re not physically holding onto them.

To let another into your heart, first let yourself in.
Whoever wants to reach a distant goal must take small steps.
You are interested in higher education, whether material or spiritual.
More Fortunes >