Rotospective: The Lord of the Rings directed by Ralph Bakshi is truly an Epic piece of Cinematic Art

This is part two of my Rotospective on Ralph Bakshi. I will be posting about each film in his library in the order I saw them.

In 1978, the first film adaptation of J.R.R. Tolkien’s The Lord of the Rings was released directed by Ralph Bakshi. This epic only covered The Fellowship of the Ring and most of The Two Towers. It received a mixed reaction from critics and, although it was a financial success, the sequel to cover the remainder of the story was never done. If I had been a critic, Bakshi would have had a positive review from me.

The film opens with the back story of Middle-Earth from the forging of the rings of power, straight through to an extremely abbreviated Hobbit. Though the film is an animated adaptation, the opening back story is done with textured live-action, adding an amazing amount of realism to the story. 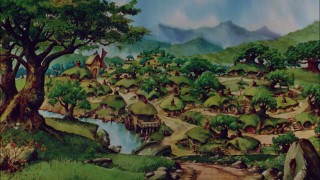 After Bilbo Baggins’ birthday party we see 17 years pass in the Shire and the background artwork of the Shire depicting that passage of time is breathtaking. The artwork in the painted backgrounds throughout this movie are equally impressive.

Equal to the backgrounds, the animation whether it be just straight hand-drawn animation (as animation should be) or rotoscoped animation is just beautiful. The rotoscoped parts of this movie were not live-action scenes taken from other films, as Bakshi had done in Wizards. All of the live action sequences that were animated was shot by Bakshi, which must have been a huge undertaking in the 70’s, even if you disregard the fact it was just shot for rotoscope to be animated over later.

The colors and backgrounds of Saruman delaying Gandalf are very cool, “trippy” would be a good word to use considering the time period it was released in. The Black Riders or Nazgûl are rotoscoped mainly in black with little detail except for their eyes until they uncloak themselves on Weathertop, where a good deal of detail is put into them, making the Nazgûl as menacing as they are described in the books. 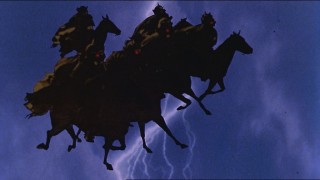 When Frodo puts the ring on at Weathertop, the use of opacity between the dark world of the ring and the actual world is amazing. Simply put, I have never seen the technique Bakshi used for this contrast in any other animations of that time or since.

At the Ford of Rivendell, Bakshi used footage of smoke, clouds and thunderstorms as the backgrounds for the dark world of the Nazgûl. Again, this play between the worlds not only illustrates the differences between dark and light, good and evil, but a great artistic vision.

This movie came out  a year after George Lucas’ Star Wars was released and I find it very interesting that one of the Nazgûl was able to use the same “Force Choke“, that Darth Vader used on a subordinate, to choke a horse and later Frodo. I haven’t read the books in a while, but I don’t remember that being a part of it. Nonetheless it looks good on the screen.

I cannot state enough how amazing the backgrounds and rotoscoped animation looks. Together both of those things shine through as the Fellowship travels after the Council of Elrond is held and again with the rotoscoped orcs in Moria. 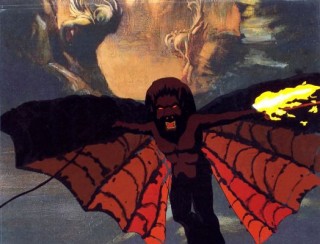 The Balrog that Gandalf faced on the Bridge of Khazad-dûm in Moria is an amazing conglomerate of a lion head, ape body, butterfly wings, a whip and flaming sword. I’m not sure how he filmed it, I’m not sure who came up with the idea for that combination of animals for the character, but it works amazingly well.

After Moria, the party enters Lothlórien, realm of Galadriel and the elves. The treatment of the Mirror of Galadriel, her ring and the forest itself are just cinematic masterpieces. Again, Bakshi uses live action and animation in harmony to portray his vision in the most successful of ways.

Boromir’s last stand near Parth Galen is much more than just some animated characters fighting and eventually mourning his death. Aragorn, Legolas and Gimli’s reactions are made that much more theatrical because of the actors who portrayed them in the live action sequence before it was animated over were great and the animators retained that greatness. 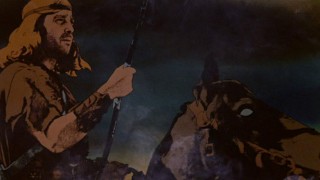 After Boromir’s death and the dissolution for the Fellowship of the Ring we are treated to more grand artistic landscape backgrounds and the Riders of Rohan, who weren’t entirely rotoscoped. They were filmed in live action and the film was exposed to light during the developing process to give it the appearance of animation techniques like rotoscope.

Now that the fellowship is broken, Sam and Frodo start to make their way towards Mt. Doom. The pictures of Mt. Doom in the distant land of Mordor are phenomenal. Bakshi really didn’t spare any expense on the art. The entrance of Gollum soon follows and Bakshi’s Gollum is very close to what I pictured when I first read the books, which to me seems like it must be a great compliment.

Merry and Pippen escape into Fanghorn Forest as the Riders of Rohan graphically defeat their orc captors. Once inside Fanhorn, Merry and Pippen meet Treebeard the ent. This is his only appearance and the only appearance of an Ent in this film, based upon the fact that they never finished the film and we never got to see the Ents attack Isengard. 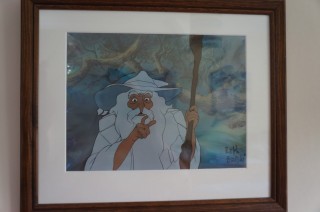 Gandalf the White in Bakshi’s Lord of the Rings

Aragorn, Legolas and Gimli catch up to Merry and Pippen’s captors as dead carcasses on the edge of Fanghorn. They follow the hobbit tracks into the forest where we are reacquainted with Gandalf, now the White Wizard. Gandalf recounts the story of his battle with the Balrog, which is another scene that Bakshi spared no expense on. The battle is supposed to be epic and it comes through in this film.

Gandalf, Aragorn, Legolas and Gimli make for Edoras and King Theodon. After removing the King from Saruman’s spy Grimer Wormtongue, they advise the King and all of Rohan is marched to the fortress of Helm’s Deep.

The battle for Helm’s Deep between the Rohirrim and Saruman’s orc army is as graphic as the slaughter of orcs on the edge of Fanghorn Forest. The one consistant thing that was nice to hear was that someone in Bakshi’s camp made sure the Orc Battle Cry at the beginning of the battle was the very same Battle Cry heard before the Orcs attacked the Fellowship in Moria. I really enjoy small consistencies like that. 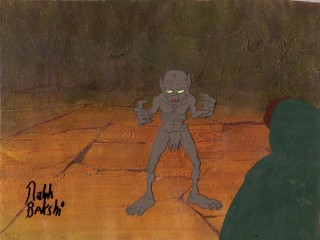 Back to Frodo, Sam and Gollum we see that the Nazgul now ride upon winged creatures and we hear of Gollum’s plan to use “her”, although there is no payoff, as they never go up the Stairs of Cirith Ungol to get to Shelob’s Lair. Howeer, we are privileged enough to get to see Sam and Gollum speak about sneakin’.

As with the prior battle scene on the edge of Fanghorn, the battle for Helm’s Deep is also done with exposed live-action film. This battle is also as graphic as the last. Bakshi had no reason not to make these battles graphic. He was making this film, not for a Disney audience, but for adults to enjoy.

Helm’s Deep is breached and the men retreat into the safety of the caves. We are then back to the story of Frodo, Sam and Gollum, where Gollum is leading them to the “winding stair.” This is where their part in this film ends. 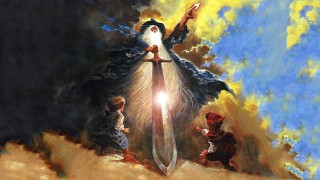 Promotional Art of Ralph Bakshi’s Lord of the Rings

Aragorn and King Theodon ride out from the caves to attack their enemy head on and are joined by Gandalf and the Riders of Rohan. With fresh blood and energy into the fight, good triumphs over evil at Helm’s Deep. Thus ending part one of The Lord of the Rings.

The combination of great art, animation, live action, rotoscope, voice actors, music and great cinematography make this an epic piece of cinematic art. A film that I feel deserved to be able to complete the story with a part 2. Unfortunately, that was not the case the story was left incomplete.

Read the Secret File of technical information and quotes from the animated “Lord of the Rings.”

Look forward to great fortune and a new lease on life!
The path of life shall lead upwards for you.
Whoever wants to reach a distant goal must take small steps.
More Fortunes >